The encounter of the Cero Espada.

The encounter of the Cero Espada.

The forest of Karakura stood shining on a day like this. The sun shone down on Karakura by now, all the clouds had melted in the sky. It was just pure blue, a lovely view for the tourists. Only, it was so hot...! Only a few months had passed since the beginning of the new year and taking a stroll around Karakura town you could hear so many people talking to others, saying things with their sweaty faces like, "One of the hottest days of the year so far..." or "It's so hot."


Just these words alone could change a person's view about this day. But, hey, atleast it wasn't the coldest day! Cold sweet foods like Ice-cream or Ice-pops had sold out from the van which was parked by the small children's school. A parent just couldn't say no to their kids afterall. But for the people whom had just finished their day in Karakura High they had to earn the money to buy such nice treats.
Miyuki on the other hand thought it was of a nice idea to bring a cold drink along to her secret hideout. She had the body of a teenager but the mind of a child sometimes. Her favourite book sat in her hand as the girl bent down slightly, pushing the trees out of the way before entering Karakura forest.
Trees stood boldly on the field, the gaps from the leaves above let the sun shine down, creating a magical atmosphere.


Trenching across the small entrance of the forest she went right, then left before arriving at a small open field, only this time it wasn't her favourite area with that Sakura tree on. Instead a pond lay in the middle, taking up most of the space. No fish lay in that pond know. Sometimes, if you were lucky you could see baby ducks with their mothers. She found the part with the most amount of shade by a tree before sitting down, opening up her book to read.
__________________ 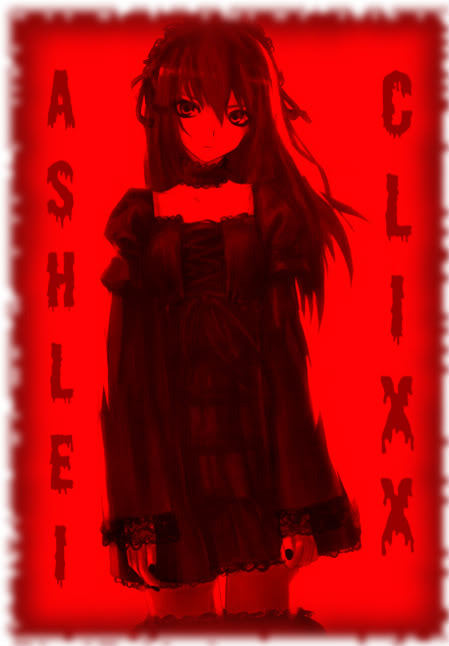 Walking the path through the forest was somebody that no one would have guessed. She walked weirdly with her hands loosely hanging by her sides and her gaze that could see through everyone near the forest area. She wore a blood red gothic dress and long boots to match with her flowing red hair and bloody appearance. She seemed as though she had just come from a hot spring of blood she looked so messed up. However this was her general appearance at all times to remind people she was a bloodthirsty killer.

Her name was Ashlei Clixx and was one of the most powerful people in existence. Up there in the top ten somewhere, but she wasn't here to just destroy everything. She had grown weary of her every day routine and decided to take a stroll in the forest to calm her nerves. She was the aspect of depression and loneliness in the Espada as their ruler, and that aspect she has kept for some time. She entered a small field area with a pond in the middle. When she walked in, she ignored whatever presences she felt and just sat down before the pond and looked at the water...
-------------------------------------------------------

As the girl had just finished the first page of her book she noticed a presence nearby, she hadn't made much noise other than her breathing, but that alone was quiet.


Her attention turned away from the book and up at someone whom had just sat down by the lake. The way she dressed freaked Miyuki out a bit but...that made two of them. They way Miyuki had gotten bullied for what she wore and liked. But perhaps...these two could be friends?
Well obviously she couldn't sense this girl's true power within her at all.

Miyuki stood on her feet before she went over to the girl with a smile. Bookmarking the page she was on before she croached down offering a hand for this girl to shake.

"If your trying to look for fish, you might want to go to the river ^_^ It's just ducks here sometimes~"

The girl asked repeating before she lowered her hand, obviously this one didn't want to shake hands at all...

"^^ Well...why are you here? I come here because it's peaceful! SOme people like noise and some people like peace~ That's what I believe will happen one day. THere will be no more violence or war in the world so humans and spirits can rest in peace, right?"

Why did she talk about the spirits? Well, only one or two believed in spirits in her school not including her. But unlike them, Miyuki could see them, she could interact with them and speak to them and she could understand them. The only thing that upset her was that they had died a lonely death, and humans disturbed them unknowingly...she wanted to protect them...from those...those monsters that roar in the night around Karakura. They were hollows.

A soft breeze entered he are, cooling Miyuki down before she held out a water bottle.
"Would you lke something to drink? It's a very hot day today so you should get as much liquid as you can. You can have it if you want...My name is Miyuki...Miyuki Santoru..."
__________________

The girl placed the water back down by her side smiling all the while.
But something made her rethink something...


"You interest me human."

These words alone by this girl made Miyuki realize that she wasn't human...
"im the ruler of all things hollow"


Hearing the word, hollow, made her rethink yet another thing. Was a hollow, that monster? Those monsters she had kept seeing destroying the town again and again? If this was their leader then...
Her face lit up, what a naive girl she was indeed.

"If your the leader of all things hollow Ashlei then maybe you can stop the hollows from attacking Karakura ^^! It'll make me and all the others happy and relieved. So then you can live without any wars happening at all!"
__________________

"Why do you not run? Why are you not scared of me?" She started all of these wars because she was the Cero Espada and she hated Shinigami more than anything. "Im an entity of death and destruction yet you do not even cry?... are you even human?" Ashlei started making little sense. She was used to people running just by seeing her but this girl. She seemed calmer than normal. Maybe she just hadn't fully realised yet and any passer by would think the two girls were at something the way Ashlei had climbed right on top of her. However that stare was like a cat at a running mouse. Almost saying 'scream or die'
-------------------------------------------------------

The shadow of Ashlei was casted over Miyuki, blocking the heat from the sun.

"Why do you not run? Why are you not scared of me?"

The girl heard Ashlei ask, Miyuki's smile stayed across her face though, she was happy. But deep inside, at least a small fraction had began to turn into fear, although she didn't show it at all.

"W-Well I don't run becuase I'm not scared of you, and I'm not scared of you because your my friend...^^ Of course I'm human!..Atleast I think so...b-but if you really are ruling the hollows...atleast make them stop..not just for Karakura but for the spirits too, they need to rest in peace and they can't lately..."

She looked away as they made eye contact, her voice trailing off as she had decided to shut up now, perhaps a change of subject?
But she couldn't think of anything, instead she moved back away from Ashlei, feeling uncomfortable with her looming over her like that.
__________________

"Girl... I will not stop what the hollows are doing as I do not control them all individually. However if you truly want them to stop, then kill them yourself. After all, you can't depend on everyone else to do this sort of thing yourself." Ashlei couldn't care less about what Miyuki wanted. After all, she was hollow inside and had a hollow heart. She was born like this even if she didn't want to.