{ B E G I N }
The sereitei was a concrete jungle of reitsu. Everything around them was made up of spirit particles but that didn't stop the sun from beaming its hideous rays at the shinigami that lived here. Well one man thought the sun was an ugly creation. that man was he guy slowly wandering the sereitei cause he has nothing to do. Ever since he came to the place, he had been under surveilance by tonnes of hell butterflies that want to inform the Captain Commander everything and anything that he does. With a stubborn attitude, he had broken a few of these flies but was never charged for doing so. After all, the shinigami had morals too and they could respect his stubborn behaviour. or maybe that was just Yoko Kuchiki asking Janna to be nice on him?

regardless, this man was Rihiku Hitsugaya: Frozen betrayer. Nobody ever knows what side he is on, but if it fuels his pride and honour, he will fight for you. The frosty man walked down the many paths that made up the Sereitei for hours on end, just trying to familiarise himself with its entire layout. knowing good escape routes and potential attacking points could be handy. Some of the Espadas tactics had brushed off on the guy, so he found investigation a must when entering unknown territory. It had been so many years since he was here, he had forgotten everything.

The prideful man walked along with heavy thuds from his boots and his blue coat waving in the long strides he was taking. Every now and again, a flash came from under his coat on his left hip where his sword reflected the sunlight. the sort of sunlight that melted your face off and also putting Rihiku in a bad mood. the sun itself was a source of heat and high temperatures was a big annoyance for this man. He looked up towards the sun and stopped walking, with his right hand shading the light from his eyes.

He didn't say a word. Just a noise before looking back down and then around. Where was he? There was a division gate just ahead with a sign on either side displaying that it was the 8th division barracks. Rihiku looked at it for a moment before he took a few steps forwards. He was curious as to the shinigami that lived and worked here as he was still new to the place and who he was meeting. he didn't open the doors though, but merely waited to see what would happen. After all, he wasn't bothered with knocking, nor interupting anybody. there was a butterfly sitting right on the wall beside him as he took steps so he was obviously being monitored. he let out a sigh. 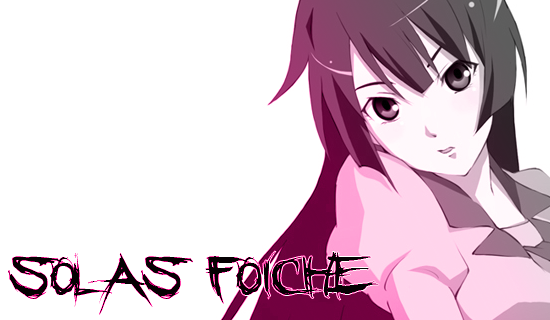 A series of small hums flew into the air from the woman's throat, her body swaying in the sunlight as she swept flecks of dust off of the barracks walls. She laughed at the notion of letting one of the lower downs do it - I mean, why let someone else do what you can do better yourself? The nunchaku sat at her hip, and the Captain's Haori... was not present. It wasn't there, and only her basic Shinigami's uniform was showing off the curves that made up her body. She was, of course, the Captain of the Eighth Division, and, if there was anyone to be watched, it was this woman.

This woman, who was known to have had an affair with the former Seventh Espada. THIS woman, who was the Gotei 13's raging lesbian Captain. THIS WOMAN, who could turn a straight woman gay after a single night. Or at least bi, if they couldn't be completely turned. Yes, it was THAT woman. Solas Foiche. You know who I'm talking about.

Her violet locks shimmered slightly in the sunlight, and she turned her head, seeing the strange occurrence occur beside her. Well, it wasn't strange, really. Just random. As random as having a Hell Butterfly land on the wall beside you. Which wasn't really random - but they normally carried a message and hovered by you. This one just sat there, as if it was watching something else... Her eyes wandered, and came across a white-haired man. Interesting. He seemed familiar - at least, she was sure she'd seen his face somewhere before...

No, no. That was idle thought from an idle mind. Best be getting back to cleaning. She would just happen to... 'bump into' the man while she continued her motions. Resuming her humming, Solas continued to wipe down the wall of the barracks, moving her bum in a rhythmic motion, and cheerfully watching the places that she cleaned. Of course, that wasn't all that she was watching. Her eyes occasionally twitched over to Rihiku, and then back to the cleaning. No, she wasn't checking him out - did I not mention that she was gay or something? No, she was keeping an eye on him, waiting for the opportune moment to strike.

"How tedious..." He was standing in front of the door, about to go through the damn door....

Bop! Her swinging bum collided with the man - and yet, the momentum of her motions caused her to fall over with a strained yelp. Actually, it was strained because she had to restrain herself from crying out. She fell over onto her butt and whined, rubbing the now-tender muscle with a closed eye and a sour look. Oooh, that smarts.
__________________
{Dai's Character List}
{Dai's Current Threads}

{ B E G I N }
Rihiku was quite close to putting his hand up to the barracks door when he noticed there was a woman beside him. With his shifty eyes, he looked over without turning his head all the way to see what she was up to. Something about her felt odd and to have the butterfly land near her must mean the thing had confidence in him not killing it for staring at him. Rihiku shook the idea off and placed his hand up against the door to try and push it open, but as he did, he felt something impede his work.

Rihiku was hit in the side which made him flinch somewhat and move to the side taking his hand off the door and quickly turning around, almost in an offensive stance but even he knew better than to draw a weapon at this point. When he looked down, he noticed the culprit was the woman that he looked at a moment ago. She was holding a duster in her hand and landed on ehr butt somewhat hard. Rihiku kept a straight face as he did not find this humorous, but instead held out a gloves hand towards the girl.

What was this? the frozen betrayer acting nice? well he had to change his ways or he would be shot. plus, she was innocent in all of this as she merely walked into him from his perspective. He still didn't grin though.
{ E N D }

Owie! That really did hurt... A few rubs of her bum and a pained look later, and Solas managed to scramble her way back up to stand beside the man with a small sigh, making sure to take the gloved hand as she went. Strange. His hand felt rather cold, to her. Then again, maybe that was just her. She mentally shrugged, and let go of the hand, before stepping back slightly.

"Are you alright?..." He wasn't smiling. His face was rather blank, and about as cold as the hand that gripped her's. Again, maybe it was just her. The Captain sighed softly, and spun around, before looking at him again and tilting her head to the side with an innocent giggle.

"Weeell, I think so." She patted herself down and made a couple of comical motions in order to show that she was, in fact, just fine. She giggled lightly, and then looked more carefully at the man, thinking things over with a small smirk. "What about you? I bumped into ya pretty hard!" She nodded a couple of times and clapped her hands together with a kind smile on her face.
__________________
{Dai's Character List}
{Dai's Current Threads}

{ B E G I N }
Rihiku helped the girl onto her feet but the way she let go of him showed she was unsure about him. It must have simply been the aura he had that emits a cold reitsu just by being nearby. rihiku was a very cold person after all in appearance, personality and even touch. it was no surprise he was Toshiros older brother as his attitude matched nicely and the chill that he brought was all but parallel.

Rihiku simply replied with one word when he heard she was fine. that's all he needed to know after all. He can't be the cause of something this annoying and tedious. but as he turned to put his hand against the door again, the girl asked the same question to him. Rihiku put his arm back down to his side and stood still, almost suspiciously.

he then turned around to look directly at the girl, swirling his elegant blue coat and showing his black dragon scaled chest plate. Was he ready for a war or something? He used his right hand to rub his hip slightly where she bumped into him before lowering it again to its floppy 'to the side' position. He was curious not for his own health or hers, but who she actually was.

Rihiku pondered something. Who exactly was this girl as nobody would simply get this close to Rihiku, share words with him and expect to walk away unharmed. Was she strong or just dumb? No... something was peculiar about the girl compared to the other shinigami he could find here. Rihiku looked at her with piercing eyes, almost frightening the way it just looked through her. he then needed to ask her a question.

" Well... I am here out of curiosity. I wish to see what the captains of the gotei are like since I left all those years ago. Do you know where I might find this divisions leader?"

All the while rihiku refrained from smiling. He was stubborn to the bone, but that also gave people reason to like or hate him.
{ E N D }