Karakura Forest. A beauty of the earths land. Old bark trees that that stood high and mighty, lakes that reflecting the sunlight back onto the land. There a lot of grass and plants on the floor, as green and pink as ever. It was a beautiful scene. It seemed rather content and peaceful today, as birds chirped across the forest and it all seemed dream like. The sound of footsteps suddenly clashed through the woods as a human being was going through these beautiful woods. A man in a black cloak holding two pairs of Kamas in his hands, appeared to be chained to his arms. He had dark grey eyes for a a start, black hair that sound of concealled his left eye. He was on some sort of mission, who was this mysterious human? "There appears to be no threats...." he talked with a sort of emotionless voice, calmed. He carried on his slow and and relaxed walk, appearing to be scanning the area for a "Threat", but what vagueness. What did he consider a threat?

His name was Yuuta Toshio. His last name represented he was a member of the Toshio clan, a noble clan of Ninjas that has existed since the 11th century. What place did this ancient clan have in todays world? The same reason they always have. To protect the Japanense homeland from threats. The threats right now were the Arrancar/Demon's that wanted to destroy and ravage the land. Yuuta is the leader of the clan at current, because his power was unlike most others, rivalling even the ancient clan leaders that had immense power.. he was now one of them. Suddenly, he took a stealth apporach and hid behind a large tree, daring not to make a sound. He was in the jungle right now, and was trying to listen more carefully. "I can feel something evil and malicious...." what was Yuuta planning with this stealth? He waited patiently, ready to spring into action at any given moment. 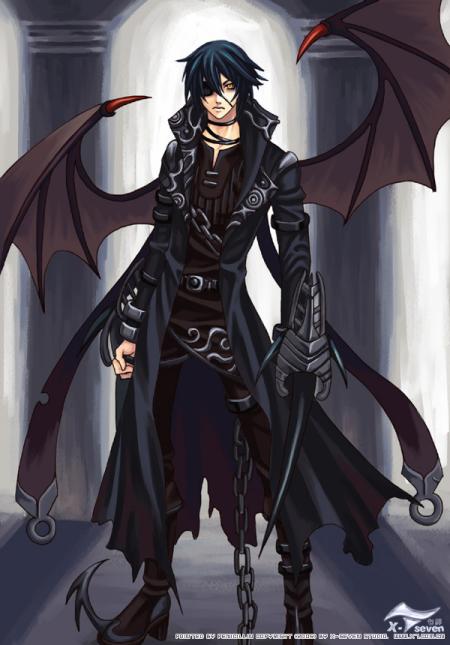 Shade, a name that is and always will be a name meant for demons and this one was no exception. He was once a cold ruthless killer until recently where he's changed a little he is no longer such a cold spirit but still will not hestiate to kill a enemy in nearly every shape and form. To demons he is known as many things in the public, a killer of his own kind is usually the first thing that comes to mind usually. On earth he's known as a demon of no important unless they learn of his connection to the demon org called Sin Fall. Then this world would take a interest in the name Shade. Over this time that he's been in Sin Fall he's learned many things and how crasy and unpredictable the demon known as Vohlis can be at times if he's not a little girl one momment she's a full grown man the next time. It was a no brainer why he was the leader of the ninth circle but then he left to pursue his own goals it seemed.

Shade's goals right were about as unknown as Vohlis's was what was he supose to do what was his place in the demon world and why was he there in the first place. Most of these questions would be wondered by a normal human but now a Grand Duke of Sin Fall was wondering with them. The mysteries of fate is one that no one or thing could give a full answer on. Few can understand that if you believen fate and it will take you down the path of where you need to go but, Shade didn't like the idea of going with pure fate driven he needed a true purpose that would provoke him to take actions. Maybe that was what he was doing wrong and back when he was young every action led him to killing another demon after the other. Was that really his purpose of being in the 9th circle to ful fill thekilling he use to do. Since torture and imprisoning and all the other things they do are right up there with killing.

To calm his thoughts through Shade took a jorney into the human world and more specifically Karakura forest one of the most dangerous places to be right now and it's only takes a few minutes for many enemies to be here from their base in Karakura Central. So Shade's power was trying to be kept at a minimum but it seems even then he could still be sensed if his were close by to him. He walked slow among the trees no expecting to be attacked he was moving at a extremly slow rate. Which showed his deep thought at the time but it seemed that he was not even there as if he were relaxing at a time and place like this. Both of his doble sided blades were inside his coat hidden not even seen. Usually a entrance from Shade would equal lots of destruction and in the case of thise forest you would see animal slaughter and multiple trees cut down in his path.

Keeping calm and resolute in the face of the feeling of this evil, Yuuta began to prepare to try and wait for him to pass by to quietly assassinate the demon, whatever it may of been. He relaxed and then tensed his muscles as he gripped his two Kama's, still putting his back to the tree, trying to peek what was behind the tree to gain sight of the demon. He could feel a slight presence, but he wasn't too sure on his location yet. He was going to go by instinct and assume he was nearby. He stood in wait, no noise, and he kept his reaitsu down aswell for a stealthy kill. As Shade apporached the tree where he was standing behind it.

Yuuta could feel him getting closer and closer. Unless Shade was a expert in perception, he wouldn't really be able to tell Yuuta is there. If that was true, then Shade probably would most likely walk past it. If he did, Yuuta would then run at a fast speed and attempt to stab the kamas into his back and rip down, most likely ripping up his spine and rib cage and doing severe damage to him. Doing this would probably reveal Yuutas presence if he didn't die. He was expecting to kill him, but would this make itself through?