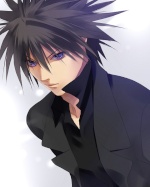 Name: Silver Vierte
Gender: Male
Age: 264 (He Looks 18)
Appearance:
He has Short grey hair that goes down to about his neck. Has dark brown red-ish eyes that somtimes look dark red.Hes about 6'0" tall and has a lanky body.He wears a white normal school shirt with the tie hanging somewhat off,And was wearing black-ish blue pants that were tight like skinny jeans. His Sword was wrapped in gauze and the end o the gauze tied to his belt and was hanging on his side.He would always be chewing on Sour apple bubble gum and couldnt see if he was smiling or not, even in battle. His Zanpakuto was all grey like his hair and was somewhat chipped all around it and there was no hilt but everytime he un sheated it the gauze flew off of it until where the hilt should be,and it was shapped like a katana. He has very a very clean face, and his chin and cheeks were somewhat limp but it was noticeable.

Personality: He is a very dull person that seems hunchback. He can stay calm and relaxed only when drunk. However, he is very spacy and suspicious when he is not drunk , he is furious when he is messed with while he isn't drunk. If he talks to someone that is smarter, or more intelligent than him, he will become nervous. He likes to point out peoples flaws when he not drunk. When he meets someone new, he likes to start a conversation by attempting to confuse them.

History/Background: He was born in a small, poor human village. Though he was raised a rich child, he grew up with everything handed to him. Even though he was rich, he really cared about how the poor lived. This, however, was cause for rich children to bully him, which is the main reason why he cant stand being around rich people. When he was just 15, his village was attacked by the poor. He hid in a small cabnent when his home was being attacked and robbed. An aged rogue discovered him hiding in the shelves, and after seeing holding a picture of his family and not the money he was handed down on him, decided to take him from teh rich to raise him as they're own. He was taught how to protect his family and himself.when he was truly tooken in, by the time he was a custom to the poor. 1 month after he turned 20 years old, the poor's hideout was raided by his previous family searching for him . He fought valiantly with his new family against them and was told to escape, however he was wounded. As he wandered aimlessly, he was attacked by his brother. He did not know who he was fighting due to dizziness, so he tried his best to fight and stabbed his brother in the neck killing him. All of a sudden, a man in a suit appeared and began to run towards him and stopped at the dead body looking at silver and yelling at him "Why...Why would you do this to your brother!". After hearing the mans voice noticing it was his father, he fell to his knees crying from what had happened to.while he was crying he sensed a high level of spiritual energy in him. However, after just a few minutes, he bled out and died. He woke up in an area unknown to him. When he regained his senses, he noticed the women smiling down at him. After a explanation, she told him he was going to become a Shinigami and that he needed to start learning how to fight. After joining, and eventually graduating from the Shinigami Academy, he began his duties as a Shinigami. However, after only 100 years as a Shinigami, he left and began to train on his own. He trained for almost 2 years alone. trying to figure out what his zanpakuto was, As he realized that his zanpakuto was never sealed and he trained to learn his bankai, And also learning that he couldnt not do that either he trained and later on he realized his zanpakuto's powers. The rest is unknown.....


Zanpakutô Spirit Name: Shishi no ken ( It means beast sword )
Appearance: It is at least 8 feet tall and its whole body is wrapped in black gauze and has long white hair that reaches down to his back and always walks on his tippy toes and moves very fastand he never talks with his mouth wrapped in guaze.
Inner World: It is a flat room inside a temple with the doors sealed closed and the floor is made of wood and it is surrounded by trees in a solitary area,
Sealed Zanpakutô Apperance : The sword also Is about 8 feet long wrapped in gauze and there is no hilt and when un wrapped it is one long blade with no hilt or tilt and at the end it is wrapped in guaze to be held and weighs about 70 pounds.
Sealed Zanpakutô Abilities: The Beast sword's abilities is to make the weight of the sword to its carrier much lighter,and its speed ten folds when the user is in the air and it is times by two when the user is on the ground.


Release: He holds the Gauze part of the sword up to his mouth and whispers "Todoroki"
Shikai Description: The sword and me looked the same but i was wrapped in the gauze that fell off of the sword[/strike]

Shikai Abilities: My abbilites after i release is to make the sword spourt
small thorns that are unseen by the human eyes,and when touched on
it lets out one of the thorns sticking to it but leaving no damage,
It grows over time sucking out spiritual pressure of whatever its attacthed
to. It sends the spiritual pressure to the user when it is cut off, [/strike]

Roleplay Sample: -As The man would have grabbed the giant sword by the
wrapped up hilt letting it hang on the ground-

-AS the aura began to be sucked back in the blade and the gauze following it,wrapping around it-

-As the thorns would have fallen off hitting the ground and shriveling up,the power inside of it being sucked inside the man-

Honestly, I have to say that everything is fine other than the brief shikai and the first person RP. And, it's awfully short to our standards. You may want to try third person RP instead of first person and expand on the shikai. It's just too short.

I'm also moving this to WIP until the problem is fixed. 'Kay?