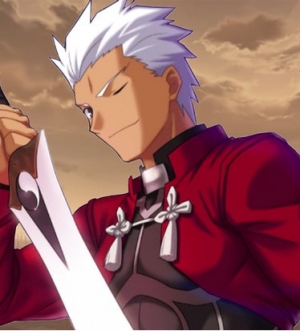 Among the small group of people in downtown Karakura city, two men of differing sizes can be discerned walking to a destined location. One man who appears to be the older of the two, is a dark skinned individual with short white hair, and an appearance that would sway the hearts of yearning women with a single glance, in other words, he has the appearance of the so-called "bad-boy". Currently, he is adorned in a black dress shirt with long, sophisticated black pants. His grey eyes were clearly filled with disappointment and annoyance, but his calm demeanor would make that seem as though it were nonexistent. This man - is the red knight, the heroic warrior of the bow, Archer. Pushing his appearance here aside, the second man beside him was the much younger individual in terms of age and appearance.

A raglan-sleeved shirt, blue and white, denim blue jeans, and tennis shoes, an appearance fit for the modern time, no doubt. His hair was also red and short, trailing and stopping to his neck, with no long locks evident anywhere. By putting the two together, one might say they were brothers due to the similarity in appearances, but these two stalwart men would easily reprimand said individual without a single ounce of regret. Was that because of their mutual dislike for one another? The younger man is Emiya Shirou; a brave and courageous individual whose sole wish is to become a superhero or in his words a "Champion of Justice". Normally, the much taller man, Archer would never step foot into the human world on a daily basis, and he never intended too - but, today was different.

News of someone close to the Iramasha and Sugiura family's birthday had reached everyone within their castle. Diarmuid, Shirou, Misaiko, Shimura, almost everyone heard the news concerning Hanako Yadomaru Iramasha. Of course, for archer, this was very irrelevant news to him as he was not a man who would ever concern himself with birthdays or celebrations, of any kind. But unfortunately, the queen, Misaiko Sugiura gave him an ultimatum he could not rebuke. ” You will go and greet Hanako along with Shirou, before we arrive or I will leave you here with Baiseirei, would you enjoy that, Archer-san?” that was the deal breaker. Everyone knew the infatuation for tough men that Baiseirei possessed, and Archer was the prime rib at the top of her list. Archer who constantly abhorred the advances from her, would never accept an offer to stay with that voluptuous, yet, hormonal woman for even a single day – In retrospect, he had no choice but to go with whom he considered to be the biggest idiot beside him, Shirou. In a way, he was curious to meet this woman, as they had more or less only crossed paths, and while he was hardly enthusiastic, this was a chance to have some personal time to himself, albeit with the so called “champion of justice” walking beside him.


This is fine; we know the reason for Archer’s appearance. What about Shirou? Well, for the most part, Shirou considered Hanako to be like a sister, ever since they met. While she could be quite the hardnosed individual, she was far from disrespectful as far as her friends were concerned. Plus, unlike the tall stalwart soldier standing beside him, Shirou enjoyed celebrating on any occasion, especially when his friends are involved within the equation. That said, if he had the power too, he would’ve most likely chosen another partner to go with him; For the most part, Shirou disliked Archer with a passion, and the same doubtless, went for the red knight. Neither of them could agree on anything, so why would they try to foster mutual understanding with the myriad tools men use to converse? Nevertheless, despite their hate, they still hold the same ideal, and that is to save every single person around them. Moreover, for today, if only for Hanako, they would push their differences aside; currently, their close to reaching their destination. Thankfully, the city of downtown Karakura was quite empty in terms of citizens, with only a few groups of people blocking their path; A trifle that can easily be solved by taking a shortcut which would converge into other pathways leading them even closer to their desired area. Shirou who came especially prepared for this day, decided to buy a present beforehand. His compassion and care for others was boundless. If he had enough humanly wealth, he would’ve bought her more, but for today, one would suffice, or so he hoped that would be the case. In his bag, laid a small and lithe teddy bear, with a bright and brown color, a present that would normally enthrall any young and fair little girl but – would it impress Hanako? He doubted highly that it would impress her at all and that she would probably give him a sour glance, but it was worth a try right?

For this special occasion, Shirou and Misaiko forced Archer to prepare a present, and since he did not want to go through the effort of using his hard earned money to buy a present, he decided to make her a homemade birthday cake, with her initials placed right in the center of the delicious birthday gift. Even when he was a cold man, Archer was never above showing acts of kindness; after all before the tragedies that assailed him in his life, he was no different from the young man walking beside him. As they descended towards their location and got closer, they could clearly discern the pub that Hanako owned. In terms of appearance, it was not anything that we as the people would consider to be “Modern” or “Futuristic”. In fact, this was more like a classic pub built in the early 2000’s, instead of one built in the future filled with intricate designs and elaborate trinkets. The quality of this pub was not defined by appearances; rather, Hanako defined this place by good service, and a feeling of being at home whenever one arrived. On a few occasions, Shirou had visited this place to sample the food, and he easily remembers that this was the place where he and Rin Okumura met on one rainy day.

That was a memory, which as far as he was concerned, would forever be etched inside his innermost thoughts. Come to think of it, beside his occasional trips here, Shirou realizes that this is actually Archer’s first time entering the pub. After all, like Diarmuid and many other Sugiura, Archer was a man who rarely ventured through the human world, unless something was worthy of his interest. He didn’t despise humans, nor did he possess any contempt for the human world, to put things into simplicity, he never had the time or place to come here and enjoy the city lights, the citizens, or the food. Of course, he would come every so often, but only when it concerned Shirou. After all, his sole wish was to kill that distorted young man at the beginning.

But against all odds, and against all belief, that burning passion is what won out in their battle. He was outclassed and outmatched in every field. Techniques, Weapons, Skill, Shirou lacked all of these things that the warrior in red possessed. So what decided his victory? That answer was simple and it needed no explanations; it was his will power that is what allowed the man to overcome his doubts and his fears and continue fearlessly on his path to become a superhero. That path would no doubt, be filled with bloodshed, pain and despair, and even tragedy, but he believed deep in his heart, that even if those things ruined him, there would be a ethereal light at the end of the long and arduous tunnel.

After the nostalgic journey over memory lane, the two males stood before the pub and both took deep, controlled, breaths. Mostly due to the fact, that they had to be on their best behavior or the repercussions would be deadly. Shirou was the first to make his move, and furtively knocked on the door with a small rhythm, hopefully enough to catch Hanako’s attention so that she would come to the door. In any case, the two men would await the arrival of the special birthday girl, and greet her with a smile. At least, Shirou would of course. For Archer, smiling was like a rarity. The only things that you could discern on this man’s face were either a serious frown, or a sarcastic and somewhat arrogant smirk on his face. Now, just how would the pendulum of fate turn today?
__________________

Permissions in this forum:
You cannot reply to topics in this forum
Who is online?
In total there are 17 users online :: 3 Registered, 0 Hidden and 14 Guests