March, the month where the snow melts, wild life return to the outside and people start enjoying what is the years first real chance to really enjoy the nice days of the incoming Spring seaon. People begin filling the streets, kids start returning to the park and Eriko, well, Eriko would normal begin his his Spring by hitting the Arcades and finding whatever amusement he could in them.

Even now he was at one of the machines playing the newest fighting game. While he never had much real talent for fighters he enjoyed playing them and would put a lot of practice into them. It is through work and practice (and various games with anyone else who dared challenge him) he would ever get really good at the ones he really enjoyed.

He stares that the screen moving the control stick in various motions pressing buts for special moves and continuously putting pressure on his opponent. The game had been pretty close far and both players hadtheir health bars exhausted to about 1/3 with Eriko have slightly more and not letting up. He was hoping that eventually with all the blocked combos and repeated switch of where he was attacking an opening would appear, or the other guy's guard would eventually break and he would have the match, until the other player used a move to knock away. Eriko's character was in the middle of their get up animation only to be hit by a super special move as the animation ended. The sequence done and Eriko's life bar depleted, the young Shinigami sighs and shakes the hand of his opponent "Good game" and gets off of the chair he was using.

He looks at the time to see he'd actually been playing that same game for a couple hours now, realizing how sore his seat was and rubbing his butt to ease the pain. "Well now that that addiction has been quelled for a while, what should I do next."
__________________ 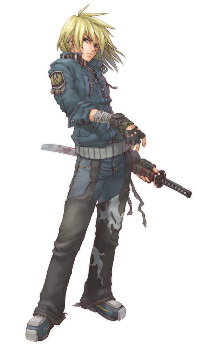 
Being on one of the more recent travel lustings, Nue had found himself in a modern suburban market. To be found inside karakura, meh if shadin had a problem he would probably make it known to the recently appointed nature shaman. Until that fucking dude did though Nue was going to have some fun exploring the place. Why you may ask yourself would he find so much enjoyment out of exploring the simplest of places? Probably the answer lies in his past. Being stuck in a mental asylum so long that he nearly lost his mind,it was a fresh change to be able to explore the outside world once more.
As for now though, nue pretty much stuck out like a sore thumb. Hair of snow which seemed to be fair as it was soft, Eyes which where gray as steel but had a soft tinge to them of understanding. Though the gleam had long left them, he still shows understanding in these eyes. Skin which is fair and unsun kissed by the days he was in the arctic bleaching them to the point of being void of color. Whilst this made Nue stick out like a sore thumb there was more to this then just looking different, another major thing was just how tall the fucker really was. Standing at over 6 foot he yes, he was very fucking tall indeed. Easily towering over the modern japanese male to the point it just was not funny. While this was true in fact, Nue just as well made those around him feel the sense of security that just oozes from him like a medicine long sought after. Maybe you could say this was from the fact, Nue has been through fucking tooth and nail to get where he was today but in truth. The guy just had seen so much that he was always fucking calm. Hell this dude had seen someone drink a brain like it was soup. YES soup so if anything nue knew this world was hard, but you didn't see Nue complaining about it.

So yes, by now you can easily get that Nue sticks out pretty bad in the sum of the whole but, there was more to it then just this. The way that he conducts himself also fucking sets him apart. Serene and graceful nue takes the simplicity of walking and turns it into something graceful. You hardly will find the man missing a step even if his foot or leg was broken. Since the truth is, the man as well just does not feel fucking pain like the average male does. So yes, while this makes him a freak on fucking two feet, there could be something good about all this odd in the mix of things. While he could be considered all a conserved person, animals feel the opposite. To the point birds will just land on him, and chirp in his ear being he is infact one of the nature shamans.

Nue wandered around for abit yes his eyes absorbing the bountiful difference in culture and in climate about him. Lust sakura tree's being in late bloom, there petals falling past him gently in the wind enticing the land with there sweet singing aroma. Amongst the petals he walked, his movements making walking look like dancing, hell it even put dancing to shame. If you didn't know better you might mistake his fair looks and movement as a cherub which is one of the entities of love. Ask Nue if he was though, the man probably would look at you funny then fucking laugh his ass off. He was far from the saint he looked like when he walked, and even how he conducted himself in the market. Gentle warm spring time breezes would have blown past him messing up his already blowing fair white hair. Causing those grey and steady eyes to gaze up captivated by the pink dancing blossoms which spiraled down in the gentle and ever present wind.

To gaze beyond these into the clear blue spring time sky, to then lowering his head look out at the sprawl of stalls and the cries of the merchants selling there wares. It was truely something that piqued his interest, causing one of his small shark-like grins to form on his face exposing from his lips sharp pointed irregular canines. Slowly striding forward,his eyes had gleaned almost as they took in this amazing tapestry of diverse cultures and other wares. To the right was a richly colored silk merchants stall. Selling everything from gold laced silk to the richest of silk worm spun linen robes,even selling some of the more uncommon hides of the time. These though would have been sickening in nues eyes, which caused him to frown hurrying forward dissapearing once more into the bobbing sea of people.

After awhile, though in this sprawling market, nue had found himself in a quiet patch by a old sakura tree which was bearing its beautiful pedaled flowers. This was where nue decided to rest, his slender sure hands reaching up to grip a branch. Then almost as if he flew up nue jumped turning himself in mid air to sit lightly on the branch, his free hand plucking a sakura flower from the tree, gently putting it to his nose smelling the wonderful enticing smell of its nectar. This is where he would stay. just humming and chillaxing under the blue blue sky.
__________________

Re: The first few days of Spring (Open)

Eriko steps out of the Arcade and begins making his way through town, looking at the sites. The spring temperature was warm, probably around the 60s . He shakes the stiffness out of his fingers from playing video games for so long and stretches out his legs, arms and tweaks his neck, making several popping noises, and finally, stretches his back bending him self backward a bit. Sitting in a stool for a couple of hours, only moving so often, was enough to make ones bones stiffen up.

Now with his body relaxed, Eriko starts making way for the nearby Ramen shop. It was a meal he'd have often but it was one he never got tired of...Well that is a lie. He hated the instant crap after so many months of training with that being the quick meal and the main lunch he'd had when working with Yoruichi and Soifon so long ago. He would much have a real bowl of noodles, made from scratch and cooked in several interesting dishes "Two fried salmon bowls please" he says after sitting down at the counter.
__________________