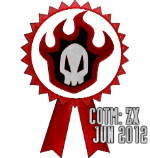 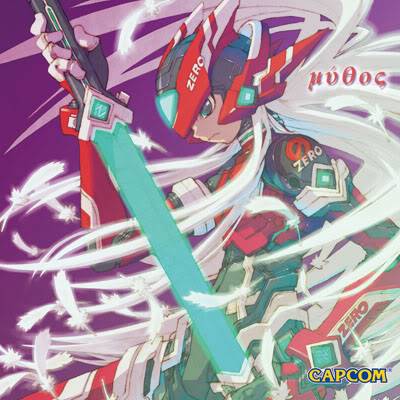 Upon walking to where he wanted to meditate inside of this large field outside of the Shino Academy far away from the people that were here currently. He wanted solace and he would get it any damn way he could. The day was young, being that the sun had just been barely rising. Interestingly it had only been about a month since he had gotten into the Seireitei, and pretty much gotten thrown into the Gotei 13's 3rd division and the third seat. He'd sit down upon his knees and his hands upon his lap as his Zero-Saber or Z-saber in short was at his side. In a matter of seconds A cyber metropolis of large buildings and lost in a green and black cyber world with a red sun. The city was large and the people were void of the position they were supposed to take. The black and green back ground paired with the trippy looking skyscrapers and cars and other assorted objects. The Sun was red and large in the skies. Zero upon looking where he was on the rooftop of a building. Looking at an opposite was not his plan of a good evening, but it could of been worse, he could of been his Zanpakutō spirit...

Unfortunately it would talk to Zero as if he was chiding a foolish child in his eyes. "Stupid fucking moron, I'm your weapons spirit. Get used to it, and you want your shikai right? Well you will have to fight me for it you bastard. Are you ready for the pain of your life." He unsheathed his sword all dramatically, and well he was going to strike with his weapon before he decided to chuckle and he points at him. His armor changed color and so did his blade. His green eyes shifted to a design of having a eyes that had no pupils. His armor went to a darker blue in color, and the sleeves that lead to the gauntlets were now grey. "What the... I look like I had a change in clothes, and why is my handle a bright white?" He said softly as he pulled the blade from it's new sheath as the blade was white and black. another real shock to this battle, and finally well he was seeing a crescent coming his way! " Oh shit!" His feet moved and his body then dodged into a state of evasion as his eyes narrowed down on his alter like a warrior would. "You're going to die." He said with a cold tone watching his eyes as he began to move towards his alter getting ready for battle. His blade still remaining a katana like shape. He began to rush him and well he began to rush Zero. This had officially became a war of attrition. The internal screaming of battle raging around them proved one thing that they were going down a battle. Remembering what he had seen that guy do he'd decide to try it.

Focusing the reishi particles in the area around his Z-Saber around the blade for the moment as he would slash out shooting a vertical crescent as he began to speak. "Genmueri-Kai.. Owadada." He said perfectly as if he had figured his attack would destroy this guy then all of the sudden twin blasts of similar particles akin to his attack would crash into his crescent blade destroying it, then his own blade came forth another one of those flying crescent blades and they would hit out against him. As his eyes widened he blocked just enough to handle it. "Shit!" He said, then the familiar spoke. "Watashi-wa Arekusu Ikari. It's time for you to show me your power..." The rushing blood within his "Body." began to boil hot as his eyes narrowed for a second then focusing his mind as he began to bend the reishi around him into a blast as he panted focusing as he aimed the attack at the familar as two blasts came forward impressed with the power he slashed out with the blade as he sent out a crescent of plasma energy. It was vertical like the last blade he sent out as he coughed out a bit of blood. It was surprising to him that he could last even this long. It had well been about a five hour battle already and neither side showed stopping. The Familiar seemed like nothing was going to stop him. Zero's eyes closed as he finally was having enough with this man trying to kill him and everything going around him. He wanted to end it. "Yes Feed yourself into the battle, show your resolve."

He would definitely show that now. "I'm sick and tired of you trying to prove what that you are an errant asshole with no life? Fuck you! I will destroy you and all who get in the way of honor! You will Die!" He focused everything into his blade as his eyes looked around as the man seemed to be doing the same exact stance as he was. In unison they said one word. "Rekkoha!" As they began to shoot out ten beams at each other causing an explosion from within the area. Both of them survived but the building they were on was shattering into pieces quickly as they bounded on to the next building. Then in a swift movement Zero dashed and stabs his familar in a last ditch effort as he was holding his arm his Z-saber back into the sheath it was in. "... Bastard..." He said panting hard going to a knee. Then the familar laughed gently. "Next time I won't be so easy on you Zero, get strong so when we fight again, I will show you what power you truly have, Zero-Shiki Assassin." He blinked softly as he collapsed for a minute as the world began to change back in to his. As he woke up his blade laid perfectly in front of him. "... Fuck... I need to rest, but... I feel stronger. Next time... I should of made sure to slice his head off." He said laughing to himself as he forced himself up and to a stand. He learned finally the basics of his attacks, only fighting now would help him to learn how to use it better. His body sure hurt like hell and his eyes seemed to returned to their normal color as he sighed and left the area quietly thinking.