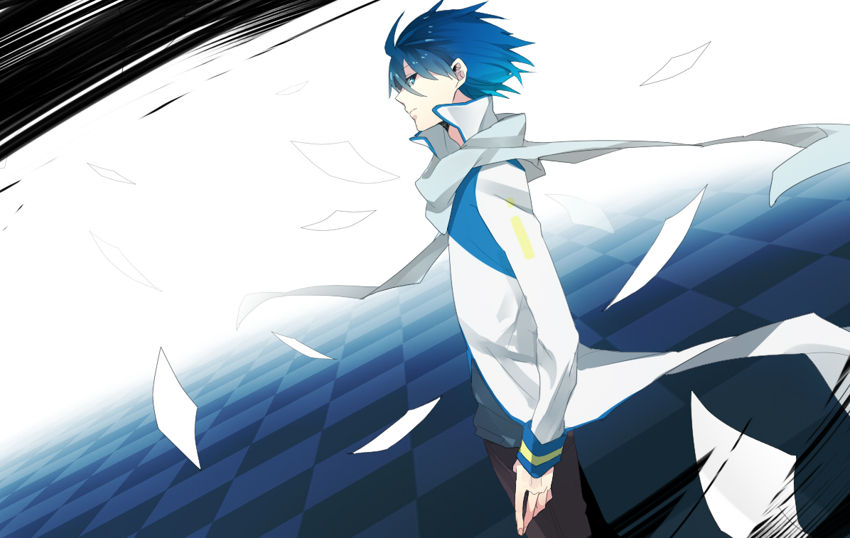 [Deadly Sin Fragments: 1x Fragment of Greed]
"I told you that it'd be fine, you're worrying too much... No no, my escort has arrived on time, you don't need to fire them. Yes, I'll be careful on my way back to the studio, but I really have to hang up now."
With a final sigh, a blue haired, tall man turned off his phone with a swift movement of his fingers, before stashing it away into his trousers. Said fingers had the typical appearance of the ones expected from pianists - long, quick, and smooth. And in addition to that, the nails were also colored deep blue, just like the scarf that this young man was wearing, no matter the weather. As blue eyes looked forward now, his personalized air transporter docked - as a man of wealth, but not greed, he was perfectly willing to spend the slightly horrendous amounts of Yen required to own a parking spot in this aerodome.

Now that he had finally docked and also calmed the chief of his security team, the blue haired man known as Kaito stood up from his comfortable seat and stretched, before walking towards the airlock and opening it with a few button-presses and a swift slice of his keycard. Double security, anything less and said chief of security would've died in shock. As the walkway extended and lead the singer down onto the ground, he half expected for his shedule to have been leaked again - but for once, he was not suddenly overwhelmed by a titantic group of fans. Still, all it took was one instant-upload camera around here to snap a picture of him and this place would be swarming with people, so he'd better hurry to get out of the place... That was what his star-self was thinking. However, his other side - the Falling Star - carefully looked through the entire building... And no single camera was actually spared to take a look at the singer or his personalized aircraft. That was rather odd, and could only mean someone more interesting or more important was here, which took the attention of the automated systems away from him. More interesting was a rather low chance... So it was obviously someone important.
"I guess my work for today just got started." With a slight sigh, he pulled out his phone again, and a short call later his car infront of the building as well as his bodyguards left the area. He didn't NEED them to begin with, apart for keeping up appearances. Showing his remarkable skill of combat when he was known as an easy-going singer and free-spirited creator of idols? Not a good idea.

So now without being watched for once, but watching himself, it was rather easy to slip out of the building and simply follow the path of the cameras with his eyes. A small ray of light when nobody was looking, and it reflected onto the back of the person for the fraction of a second, and it confirmed his suspicion about who was the hidden VIP amongst the crowd. Black long hair was the first thing Kaito saw from behind - obviously he didn't want to get noticed as a sudden follower, so he tried his best to blend in with the normal people, even quickly stuffing his trademark scarf into one of the pockets of his jacket. A problem arose when she didn't follow the main road, though - as to not be spotted immedeatly, Kaito didn't even look at her while moving through the alley, or at least not visibly. In his mind, he already pieced together most of who she was... Thanks to his time as a prosecutor. The Empress... What in all of god's many names was she doing here? Well, it certainly wouldn't hurt to keep following her just to make sure nothing bad happened. As the hero Falling Star, that was his duty!
__________________

Through the crowds, the blue haired man kept following his 'target'... the target of protection. He was still quite unsure what brought her here, and without any escort, but if the wrong person noticed her presence and figured out who she was... Then she'd need the help of a hero for sure. While for her, empty spots in the crowds could be seen - he, as a powered human, had no trouble noticing the variety of spirits in Karakura. Shinigami, Sugiura, Vizards, even the occasional Arrancar with special permissions - a hotspot of spiritual activity, even years after the Winter War.
The first danger soon appeared - although in a different form, a drunk. Sadly, humanoid trash like him still existed, and while looking at him from behind Hanako, Kaito could see it clearly - over his heart, growing and twisting like a mutated growth, was a Deadly Sin Fragment, a Fragment of Envy. With a slight sigh of relief, the blue haired singer watched Hanako evade that gang member - who now noticed the follower, who had not slowed down or even attempted to dodge him.
"Huh? What do you want, bl-"
But no further words were spoken, as the drunk attempted to, while stumbling, ram the singer out of the way - because he quickly grappled the man, ripped something that nobody else could see from his chest, and spun around him almost instantly. The drunk fell onto his ass from the sudden spinning, unable to keep his balance - as other people on the street chuckled at the display, Kaito bowed slightly with his playful smile, before being on his merry way - in his hand, hidden from view, a Sin Fragment of Envy. Moving slightly faster in order to catch up with Hanako again, his eyes widened a little bit at the sight of the highly secured building. Not bad for keeping someone like her safe from attacks, that was for sure!
Kaito relaxed a bit now. The girl was almost at the target location already, and no single attack so far - his small, dignified smile, as he leaned against one of the walls on the sidewalk against a building, he was readying himself for the treck back to his own building... When his fine hearing also picked up the preacher. With a sigh, he, from more distance than Hanako, listened to the crazed words of this madman... But probably a lot more worried than her. The singer knew these types, always short of exploding...
Just usually, not that literally. As the device to prime the bomb was pulled out by him, Kaito's eyes widened once more, and time seemingly slowed down for him. He had no time to hide right now, but nobody was really paying attention to him, so he decided to risk it right away - and from his chest, a bright, blinding light erupted, as the constructed heart lit up with the fire of the Ray Force - the Deadly Sin Fragment of Envy that Kaito had just acquired sinking into the skin of his right hand, as the costume out of blinding light manifested. Nobody would've been able to actually see this transformation - the sudden, bright light from where he had been standing was way too strong for any modern technology or person to pierce it with the eyes. Even with spiritual senses, it was impossible to tell - for his energy signature as a human had vanished, making place for something that seemed both demonic and holy at the same time. This being that now dashed out towards the bridge, it was not Kaito anymore... He was...

Falling Star. A hero seemingly made out of sentient light - a being so fast, that time itself seemed to slow down in his presence. And now, he was here - right where he was needed. The trigger had already been activated - but that didn't matter. The electric signal towards the bomb was not something Falling Star could stop - but he could outspeed it easily. Lightning seemed slow when compared to his current speed - the most basic form of Ray Force, even. There was no saving for the madman who had turned himself into a bomb - but the ones who were standing right next to him could still be saved. Not by anyone normal, mind you - outrunning an explosion, for a normal human, was impossible.
But not for someone who twisted time itself into appearing slow for him. With a first grab, Falling Star already snatched two of the people closest to the preacher, and dashed back off of the bridge - dropping the two people onto the ground as softly as he could while being in a hurry, he repeated the same process, again and again. A whirlwind of white and light, almost impossible to spot, were it not for the specks of different colors he ripped from their positions and brought into new ones - all while the bomb had just started to slowly explode, and the shockwave started expanding. But by the time the explosion even started to destabilize the bridge, and would've started killing people - the last person was brought to safety, and the insanely loud BANG of the bomb was heard across this part of Karakura, but besides the offender himself - nobody else was in the blast radius anymore. In fire and dust, he perished - for nothing. But before the crumbling remains of the bridge, there he stood, even in the view of Hanako, who had thankfully been out of the blast radius anyway.

Black linings on completely white clothes, unseeable eyes that still gleamed with kindness, and a shining, literal star on his heart - the arms triumphantly planted onto his sides, the head raised high above, and with a smirk that could make anyone smile.
"Fear not, citizens of Karakura. The evil monsters of the Force Feedback will NEVER be able to hurt you - for I am here, the hero for the heavens and the earth! I am... Falling! Star!"
Striking a typical pose of his arms stretched out, the people slowly realized that their lives had just been saved by this person, and despite his almost ridicolous behavior, slowly, an applause was heard, that seemed to roar even louder than the previous explosion. In a thanking motion, the hero bowed towards the crowd - before stepping over to Hanako, who had been knocked down from the blast, offering his right hand towards her to help her onto her feet.
__________________