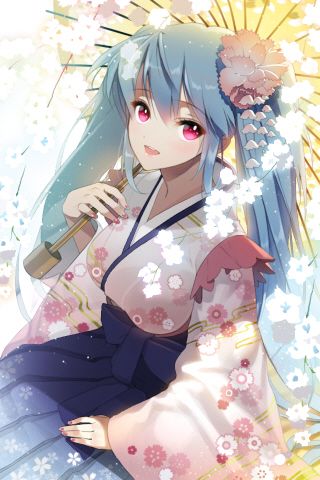 A small flash of blue light would shoot right by sollux's
head. It was Ivy's chi bullet. She could feel the presence of some one here so she fired off a warning shot in their direction. It was not too often that some one comes out this far so Ivy was always cautious of house guest as there must be a reason for coming all this way. She would call out in a smooth and sweet voice. " OOOO Loook we have a guest."


Walking out from the tree line Ivy would let her self be seen.
Her long blue hair blowing in the wind as she started towards him. “This is not a place for wandererrsss..." stopping to look up at sollux seeing his eyes slightly through a gap. She would be talking out loud "Did mother make him? He certainly looks like something she make DONT he sis?. Hmm ya she did not tell me nothing either ... But when does she ever." It would seem as if
she was talking to her self. Pointing up at sollux in a childish way/ tone of voice. "Explain your self." she was not pointing for no reason as she started to charge a small orb of blue light on her index finger.
__________________ 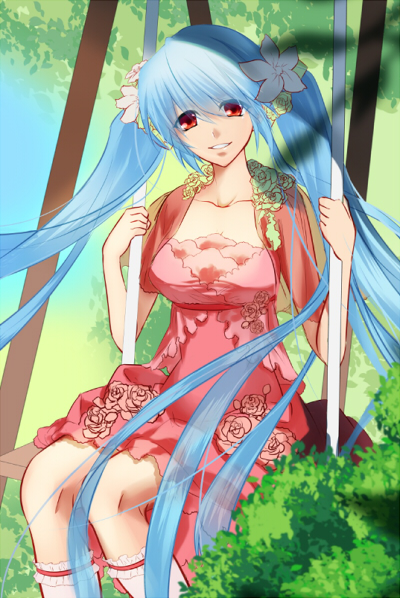 A Smile at the Bicolor Boy
It would only last 2 seconds but the hollow presence that was only a 6-0 would shoot up to a 1-5 and the sword on Ivy's side glows a faint black.

"Hmmm" Ivy had a pondering look on her face. "Do I want to die? While there are some benefits of death that do appeal to me I have no desire to have my life ended just yet." Ivys eyes would become glossed over as Sollux's energy blasted. "WoW Nice Cero. You’re a rather interesting hollow aren't you?" Making her way over to him Ivy would slowly walk around Sollux as she Inspected him showing now fear to spite the massive power he displayed. "WHAT do you mean he is human? Just how could that be? Will sorry I can’t sense those things like you." talking to herself it would seem again. Ivy stopping in found of him looking at him with a smile on her face. " so is it true? Are you human?"

This was all to interesting to Ivy. All the humans she had met before was powerless weaklings that equaled up to little more than cattle in her mind. But not this one... he was not weak by no means And though she did not realize it her self yet she was rather attracted to his eyes that in her mind was reminiscent of her mother.

Sollux had grabbed Ivy's wrist. Though this kind of thing would be scary for any normal girl.. But Ivy was not normal as she did not fear pain or death. She wouldn't resist him lifting her up in the air."...A stinking hollow... The way you say that is as if you find it Offensive. why is that? Hmmmm what do I want? I would like to examine you and your biological makeup. Your the first other human I've seen that has powers. It’s quite interesting. "Laughing a bit "It is true I am Human.. As for the smell of hollows on me I do live here with my adopted family and they are hollows." At that moment a small bit of black energy would spark off the sword causing her a Bit of pain. "!ouch!... Hey that hurt. O and yes this is my sister. She does not like to be called hollow." with a snicker in her voice she would say." But she is an arrancar. Would you like to speak with her? She does have a body... but it's not best to let her form it." Ivy would pull up the sword while holding the sheath." Just grasp the hilt and you can hear her as I do."
__________________

Ivy had a contempt facial expression "The
way you see things ARE a bit one sided. You see most hollows ONLY eat
humans and Shinigami. BUT humans kill everything that they touch. They
hunt the animals of the forest and they catch the fish in the sea
sparing the life's of nothing. Humans Kill countless species and you're
just ok with that cause it's an animal? Because their lower on the food chain? Will Humans are lower on it than hollows." laughing a little bit
"Using me? MY mothers has done nothing but love me... Unlike the humans I
was born from who abandoned me. And I don't count my self as a powered
human I've seen for I am my self." there would be a scolding tone in her
voice.

As Sollux made a barrier around his hand and
gripped the blade Eien would activate her Barrier breaker making
Solluxs grip her as if the
energy barrier did nothing. Eien Voice would ring out in Sollux's head.
"OOOO Sorry cuty But Barrier, borders or even boundaries are things I
don't really care for and won't stop me. And don’t worry I cant
say I trust you ether... if you threaten my sister's life once more I
may have to become your playmate. Remember you’re the guest in our home.
“The voice would sound play full in nature.

Ivy would look at Why Sollux a bit perplexed by him" Its not odd for me in any way. what is Odd about being with people who
love you and who you love? what is odd about having a family? I know
most humans are born into their family's but is it really so wrong tobe
with one your not genetically related to?"

Ivy looked at sollux with almost doll like eye's her voice cold as ice. "Vegetarian’s are NO different they eat plants and though they may not scream they are alive and have a life force of their own. Now after stating that fact you should be able to see humans are born killers. That it is in fact us who have no physical or mental choice but to kill. But hollows on the other hand some weak hollows live soully off the high spirit concentration in Hueco Mundo. As for hollows not being smart my mother is quite the accomplished scientists." running her right hand thru her long light blue hair. “It’s true I myself have never stepped out of this forest but I can whenever I like for I am not trapped her but it is by choice that I stay."

Ivy would lessen to sollux yelling at her about his father waiting for him to finish. "I know nothing of having a father for I never had one. But I do have a mother." Ivy would hug sollux and speak in a soft voice. "From what I know fathers are not quite the same. A mother is much more caring and compassionate. A mother will not only protect her children with her own life but she is there to comfort them as well. Why must you be so quick to judge our family? Is it just because we are not all human? Why don't you give our way of life a try? You may like it. Don’t your think it would be nice to be with others who would care for you and accept you for who you are. With us there is never a reason to hide anything no matter what it is. WE will accept you." Ivy would not only speak these words physically but use her powers to send them in to his subconscious to implant the idea firmly in his head. Ivy would cross her arms behind her back pressing both their bodies together. “So what do you say?”
__________________