Renji vs Jaeden a chance encounter

Renji vs Jaeden a chance encounter

The storms in the distance echoed out, the sounds of thunder were off in the distance. The Crow had finished a few new moves finally, this had been a long road for Jaeden. He'd noticed the power within him had been growing since his battle with Yuri. A future was coming when Xander and the others would need to stand alone, without him. He knew Kaminari would attend the Soul Society. But what would he be doing for the future of this place. Many of his pieces were already in place. Everything was going as calculated so far. His eyes were said to see everything to the future and beyond. But they remained closed for now, he was sitting and inhaling a breath for now. Thing's had been so crazy lately. He'd not been able to speak with Kimiko lately, he did care for the female deeply. Almost like she was his daughter, this was something he would perhaps need to think about later on. On his left hip Seiryu sat. Jaeden had finished the Bankai hadn't he. Doubts were lingering, it did more damage to him then the target.

Perhaps the true form wasn't coming out due to the other problem. His eyes opened for a moment, the beautiful red gaze fell upon the horizon. The Academy wasn't to far away, the old Shinigami was enjoying the rest for now. His body had healed from using it, but perhaps somethings weren't meant to be known. His haori run across the ground, the back settled now as he began thinking for a couple moments. He was calculating the future, trying to see how things would go. His worst case possible outcome was he became a hollow. Jaeden wasn't sure what was going on, but caution was his friend for now. He'd joined the Soul Society, at the words of Kaminari. A dear friend, his letter was sent to her recently. Simply informing the female of his condition, why h couldn't take that brawl they had seriously. Jaeden seemed to give her all he had, but in truth he was fighting within himself. Holding back a monster from coming out. But for now a nice rest was in order, perhaps practice.

Jaeden had learned an important lesson from his duel with the swordsman. To make moves as you go is the best logical answer, Jaeden was merely creating swordsmanship as he went along. His journey wasn't near the complete level he desired. Nor would it ever be at this rate, patience was all that waited for him now. A judgement would be coming some day this much was for sure. 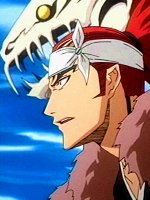 A fist hit the side of the Shino Academy "Damn it Gin!" Those soft words escaped the mouth of the red haired male, Upon closer inspection, The red hair, The signature headband, One could guess who this was, Renji Abarai. His mind had been perplexed since his encounter with the white snake. He began walking, His head hung down as he tried to think of how Gin could be so right when it seemed so wrong...How was it, That Gin, The white snake....Could have such truths behind what he said? It was just all so confusing and because of it...He couldn't focus on anything. He could recall his fight with that Iramasha, Brian....In that fight everything came crystal clear to him, Everything was so easy to decsern, And yet now...After that short conversation with that Traitor......Everything was flipped sideways and backwards.

Lost in his thoughts, Renji didn't see or notice the Captain Crow of 8th Divison and because of it nearly bumped into him and fell over, Only managing to dodge out of the way at the last moment. His immediate reaction afterwards was to stop and bow "Sorry, Crow Taicho!" His words came swiftly as he knew it was a mistake to not do so. "I was lost in my thoughts and wasn't paying attention" He thought for a moment, This....Could actually be what he was needing. When given permission he'd raise himself again and speak "Crow Taicho....Would you train with me?" He asked, Seeming rather sudden and abrupt with his words "I know it's short notice and all but...I need something to clear my mind"

Jaeden's form was graceful, something some wouldn't expect his reflex from his training was still in effect, stepping on his toes he moved around Renji very much like a feather within the wind, he blinked at the male now. He'd merely moved out of the way of the bum. He didn't figure the male to turn and say anything about it, after all men were entitled to their thoughts. "Sure, I have a couple new tricks to put some time into." Jaeden didn't seem formal either, his eyes of red remained closed, some reports did state that he wasn't blind. The male suffered some intense training as a child that made him fight with his eyes closed. This heightened the other senses to high levels, he may as well of been born a blind child. He learned to not use his eyes for anything. But when he did, they could read things to such high degrees. He pulled his Zanpakutō out now smiling before simply holding the sheath. He would need to judge the speed and skills of Renji before anything.

"Show me what you have, Abarai Renji." Jaeden's body was very flexible and fluid. He wasn't going to use the new sword style just yet, it would be something he himself designed. Though this was the form of it, Jaeden's body seemed to move back and forth, he was a bit wobbly it appeared as though he was inebriated by some form of sake, he was swaying around. Waiting for the male to begin his attack. This was something Jaeden was fine tuning yet, more of a method of melody that he couldn't quite describe. It was similar to a dance the way he was moving his body. He knew the style of Renji from some reports, a close range fighter. His eyes never did open as he listened for sounds of the male's attack to come. The area was silent, he couldn't be fooled by cheap tricks either. Sensing reiatsu was something that he'd become almost great at, only a few people would pry be able to escape his vision.

Holding his Zanpakutō within his left appendage, the digits clasped around the hilt the blade pointed towards the ground with the hilt pointed outwards.

Renji grinned at Jaeden as he accepted the challenge. He watched as the Taicho seemed to be a little wobbly but didn't put much thought into the concern. He moved back a bit and pulled Zabimaru from it's sheath "Alright then" HE said, Placing one hand at the guard of Zabimaru and sliding it down the blade, all while speaking "Howl, Zabimaru" As he made the motions and spoke the release phrase, Zabimaru let off a red tinge as it changed it's shape to a more elongated and wider blade. Having multiple tips which would resemble something like Snakes fangs. "Get ready, Taicho" He told him, Bringing the blade up and swinging it down, The segments seperating and splitting outward to grow longer and longer, Long enough to easily reach the Taicho without Renji having to move a single step. While most reports said he was a close range fighter, In reality Renji excelled at all types of fights. Long range, Mid range and short range. Zabimaru was kinda like that, It could grow in length which was seemingly endless, Only limited by Renji's Reiatsu which wasn't lacking at all right now.

The basic attack was pretty easily avoided by most, However only a complete idiot would assume Renji was vulnerable at this point. Just because he attacked and the tip of the blade was extended out, Didn't mean he couldn't block and only a fool would think that, And Crow Taicho was nowhere near that.
[Sorry for the late reply]