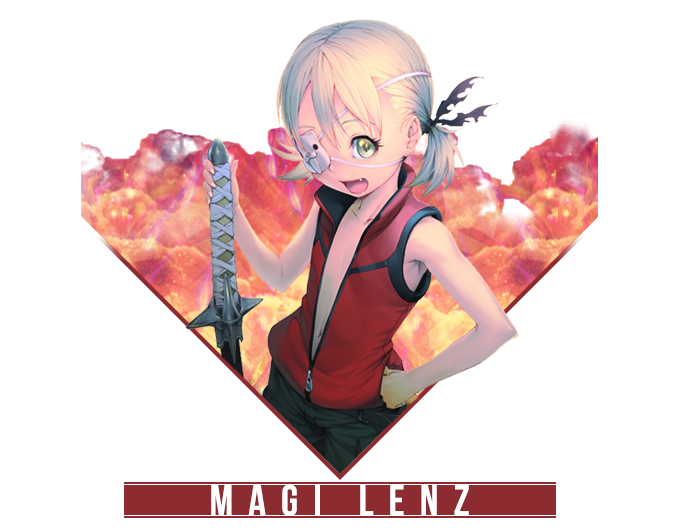 The World of the Living, a distant memory for the rabid pup of the Gotei. Here, in New York City, she was assigned to head a mission sided with an entire unit of Shinigami in order to rid the city of Demons. Though their efforts were found to be fruitless as they were chased out by the Demon Queen, Mana. During this mission, Magi learned what it was like to lead and lose people lives in the process. It was an unfamiliar feeling that haunted her slumber for years since its pass. The blood-stained imagery of her allies being torn to shreds before her eyes, incapable of retaliating due to the nonsensical act of doing so returned to her as she stepped from outside of the Senkaimon. Her guide wished her farewell, to which the captivation of her reminising thoughts prevented her from responding until the gate closed, having second thoughts on patrolling the area.

Recalling the meeting her Squad held to assign a body to the area, she felt rather stupid for volunteering for the part. Though, it was the better part of her that brought her to do so, thinking that the land was still riddled with demons. She was one of the few in her ranks that held the knowledge on how to defend herself against demons, and she couldn't imagine sending someone that lacked that. Thus, here, she was again. The air didn't seem as tense as it once did. Her mind would place a cage upon her, keeping the dreadful thoughts of her past to the forefront of her dreams.

Returning to the task at hand, she would press forward. She pulled out a device that looked to be just a square piece of glass, the size of a smartphone. The crystal emitted dim lights that flickered a sonar signal to locate Hollows; the radius of the device was dependent on the user's spiritual pressure. Using disturbances in the user's field of power to send back a signal to the device. Noticing that the device wasn't giving off much of a signal, she'd lightly lift on her eyepatch releasing the wild reiatsu that captivated her true power. As she did so, the tangible power of Akuhebi crushed the beckon just as she received the signal. Letting the eyepatch plop back down she groaned, annoyed that this always seemed to be the case. Her inability to read spiritual pressure and use her spiritual pressure was still something that thwarted her in patrolling. It was perhaps her most significant flaw, aside from the fact that she was unable to flash step or use any Kido. She at least had the relative direction of the being.

She had arrived near a bay, a dock visible just beyond the waters. An amusement park that was known as "Coney Island." Information that was futile to her, but she would make her way there anyway. Having to take the long way around the bay instead of just running across. While she had grown used to this, it was still a hindrance to her performance. Nonetheless, she even traveled with a good speed using long and high leaps in order to scale shorter buildings, using her legs' durability to pounce of buildings that were too tall to climb causing further damage to the slightly ruined city.

The battle-torn area of what was once an amusement park was intact, for the most part. The larger rides that once provided fun for all ages held the most significant of damage, but the majority of the rest of the park remained. As she looked around, searching from the disturbance that led her here, her pace dropped as she found the little scamp. He was but a tiny fellow, which had to mean that he was a speed class of sorts. Figured.

Attempting to sneak up on the Hollow that seemed to have its gaze fixed upon a house mirrors, she slowly crept. Yet, it wouldn't take, but a few steps before the Hollow noticed her, her uncontrollable reitasu giving up her position. "Goddammit! Get your ass back over here!" She shouted with a pouty lip, her arms shooting down her sides in a tantrum as the Hollow pranced into the house of mirrors.

Waiting for a moment to see if the Hollow would heed her command she bellowed a sigh with a curled brow before stomping inside. "I said get your ass back out here!"

Saga Iramasha | THE SAVIOR
https://www.youtube.com/watch?v=gFjqAtxW2s0 you should play
The speed at which Magi entered the mirror house caused a brief vacuum in the air, enough that the inward pressure to fill the vacuum caused the doors behind her to close. It wasn't a loud shut since the quick rush of wind also cushioned the closing, but it was a noticeable sound. More noticeable was the darkness that followed. The only light sources available were the dimmed, barely functional red lighting fixtures emitting just enough make the path through the mirrors clear and the reflections within them, but not much beyond. The exit signs were still working with a neon green spelling out each letter: one behind her, by the doors she just came through, and one all the way at the other side of the room.

The whole setting was a bit eerie if you were attentive to that sort of atmosphere, but a trained shinigami must surely understand these effects to be the speeding hollow that just ran through. Actually, there was one more thing. If Magi walked up to them she'd notice the mirrors were a bit distorted, each different from the other. People familiar with mirror houses might expect this at an amusement park, but the differences were usually comically drastic. These mirrors were closer to an uncanny valley sort of feeling, each invoking different sorts of feelings or emanating different kinds of personas. One mirror made Magi look a bit taller, a sort of prideful posture to it. Another felt a bit hunched and disgruntled, her hair a bit frazzled. One even looked a bit like her shikai, indistinct and subtle at a closer look but a peripheral view made it seem clearly like her shikai form.

The only other thing to colour the room besides the red and faint green lights and the darkness consuming the whole area was the speakers playing a background music. Each step through the mirror maze made the music feel louder and louder. The percussion rang in the ears and each strum of the bass pulsed a vibration felt in a person's abdomen and back. When you paid attention to the song, the volume seemed to return to normal. Whatever you didn't focus on felt all-encompassing and consuming, like it drowned you in a disorienting pressure, but as soon as you paid it mind you'd realise how distant all these things really were. The further you took steps into the mirror path, the more the mirrors felt like they were reflecting the soul.

Everyone always reacted differently to this. Most would be pushed away by all this. Everything felt all too tangible after all, and it surely was a terrible experience. But some felt a sort of a calling to it. Some, with unbridled ambition had something to prove to others, and going through these mirrors was proving something to yourself. Some might be pushed to go through it as a necessity. For one reason or another, turning back just wasn't an option. Some found this to be a learning experience, and walking to the end surely wouldn't yield you empty-handed. Of course for Magi there were all sorts of reasons to push on forwards, first and foremost being a shadow dancing through the mirrors--the hollow she chased in, surely.

Eventually it almost felt like the reflections in the mirror were whispering towards her, but once again any time you properly focused the whispers would vanish into nothing. The voices were scattered but they all sounded familiar. Sometimes, kind of like Magi's own voice. Pretty often it felt like the voice of her zanpakuto whispering to her, and curiously enough if Magi ever sought a response from her zanpakuto none would be given. As if there were something in the way, a wall, blocking their communion. But by now, perhaps that was natural and for the better. This way, Akuhebi couldn't burden her with unnecessary insults and ridicule.

Other times the whispers were entirely unknown, but soft and empowering, like an angel speaking God's message. If Magi kept walking onwards chasing after the hollow, by the time she hit the centre of the room she'd clearly see one of her reflections act differently, no longer mirroring her own actions. It was entirely unnatural, but perhaps by the point she reached this area, all the disorienting factors tugging at her senses might change the way she thought of natural--just enough to not be surprised by a reflection acting different. The reflection, a bit of a taller, more mature looking version of herself, spoke with a womanly voice.