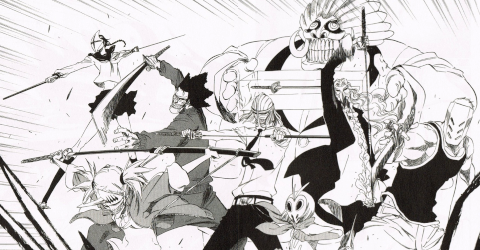 THE VIZARDS
Among the many shinigami of the world, there are those small few who have been corrupted by the nature of a hollow in some way or another. Perhaps it was akin to poisoning, by a vicious attack from a wild Hollow. Perhaps their soul became so embroiled in negativity that their soul simply began to deteriorate. Or, for those very small few, perhaps they were damned by the hogyoku itself long ago. Regardless of the origin of this internal hollow power, the fact remains that these shinigami are no longer completely the same as their pure counterparts. These Vizards have access to power that few others do, but certainly not without a price.

SKILL SHEET
Power Augmentation: As most people know, vizards gain an additional source of power upon the day they become one with their inner hollow. Thus, with their shinigami and hollow powers meshing together, one can augment their powers beyond what a shinigami or hollow alone would be capable of. Therefore, the higher your skill level is in this area, the more hollow powers you will learn, and the overall strength of your vizard will increase.

○ Untrained: A vizard who is untrained in power augmentation will typically have no relationship with their inner hollow or their inner hollow is so weak that there is no amount of relative power to be gained from them. When an untrained individual dons their mask, they receive no boost to their capabilities or access to hollow powers. A vizard with a power augmentation at the untrained level may not even realize that they are themselves actually a vizard, or it could be much harder for others to identify that person as a vizard.

○ Beginner: At this stage the individual has begun to see the effects that can be gained by using their hollow powers in combat. While they may not have perfect control, or their hollow is still relatively weak, donning their mask they see a 50% boost in their powers. In addition, it is possible at this level for a vizard to use more basic hollow abilities such as cero. While the user may have gained access to the bottom level of the power that can be granted by one's inner hollow, they do not gain much other than this small concession.

○ Adept: A vizard who has achieved this level gains a decent usage of their inner-hollow's powers. They receive a boost of 100% to their overall abilities when donning their mask, and it is at this point that they can usually begin to experiment with the abilities granted by their inner hollow. However, because they have gained a decent measure of their abilities, they also have begun to risk the hollow taking over at a greater rate, especially if they are experimenting with the capacities of power they gain from wearing their mask.

○ Advanced: When a vizard has reached this level of power with their inner-hollow, they will gain augmentations similar to whatever it is their inner hollow's unique powers are. This may even extend to other physical traits, such as augmented physical attributes. In addition it means that experimenting with one's inner hollow's abilities becomes much easier than previously. When donning their mask they see a boost of 250% in all attributes.

○ Elite: At this point a vizard will see a boost of 500% when donning their mask. The infusion of hollow reiryoku and power is so potent that they may be mistaken for a hollow. Little to none of their inner hollow's unique powers have been unexplored at this point, and their ability to utilize hollow ability is barely distinct from that of a hollow itself.

○ Master: It is at this stage that the barrier between the soul and the inner hollow has begun to blur, as the vizard has reached a point where their relationship with their hollow, and understanding of their powers, has grown massively. The mask now provides a 750% boost to power while it is on. Hollow powers can not only be used freely, but in many cases are easy to actively fuse into one’s shinigami powers.

○ Grand Master: At Grand Master, a vizard’s ability to enhance themselves and their powers is more or less limitless. Fusing one’s hollow nature with their non-hollow abilities is easy enough that it can be done without any special effort or preparation, and it is fairly likely that one could simply disguise oneself as an arrancar simply by exuding their hollow energy. When donning their mask, a Grand Master of Power Augmentation gains a 1000% increase to their power.

Hollow Control: While a vizard can draw a great deal of power from their inner hollow, utilizing these abilities can naturally lead to the vizard being overwhelmed by said power if they are ill-prepared. This skill governs the ability of a vizard to draw on their inner hollow for extended periods of time, granting them more control over the otherwise dangerous and uncontrollable nature of a hollow’s power. While Power Augmentation grants a vizard the ability to utilize hollow abilities, it is Hollow Control which prevents that from being a suicidal endeavor.

○ Untrained: At Untrained, a vizard outright cannot utilize their hollow abilities or wear their mask without their inner hollow completely taking control. Because of this, a vizard at this level of skill is functionally the same as a shinigami in terms of their abilities.

○ Beginner: While the vizard with a Beginner level of Hollow Control still lacks much in the way of authority over their hollow, they nevertheless have made it to the point where they can utilize their mask or their hollow abilities without it being a completely suicidal endeavor. At Beginner, a vizard can wear their mask for a single post before they must remove it.

○ Adept: At Adept, a vizard has begun to understand how to rein in their hollow to a degree that allows them to, at the very least, no longer be a danger to themselves or those around them. Hollow abilities of a more extreme nature may still be dangerous to utilize, but simpler things are at least within your grasp. Of course, wearing one’s mask is still a risky endeavor, and can only be maintained for 2 posts before it must be removed.

○ Advanced: This is the point at which a vizard can truly be said to have control over their inner hollow, in whatever form that may be. Whether there has been some degree of mutual understanding, or simply sheer domination, the reality is that a vizard at this level can easily utilize any basic hollow abilities without needing to worry that it might come back to bite them. At this stage, a vizard may utilize their mask for 3 posts before it becomes too dangerous to wear further.

○ Elite: The peak of what most vizards can hope to achieve, this is the stage at which a vizard likely has no real concern about their hollow taking over in their typical functionality. Usage of their hollow abilities, so long as it doesn’t edge into the extreme, isn’t a threat to their well-being, and in general they only need to worry about intense displays of power. At this level, the vizard can wear their mask for up to 4 posts.

○ Master: Through some means or another, a vizard at this level of Hollow Control has reached the point where the only real threat they face from their inner hollow is likely the intrinsic corrupting nature of hollow energy itself. The vizard has nearly nothing that they would be afraid of, and only the most intensive possible applications of hollow power would even begin to concern them. A vizard with Master Hollow Control is capable of wearing their mask for 6 posts without being in any danger.

○ Grand Master: From here, a vizard has moved past the very idea of worrying about whether or not they are in danger from their hollow abilities. No application of their power would put them into any jeopardy, and regardless of the “why,” they are unilaterally in no danger of their Hollow taking control of them. A vizard with this level of power no longer needs to concern themselves with the duration they wear their mask, and can wear it more or less indefinitely.

RELEASES
The primary “release” that vizards are offered when compared to their pure shinigami counterparts would be the ability to don their mask, and gain temporary increases to their power on top of whatever state they might currently be in as a shinigami. This release is governed by both of the vizard skills, as detailed above, with Power Augmentation dictating the boost to power that one’s mask provides, while Hollow Control governs how long the mask may be worn. This leads to the mask being a dynamic and fairly individual release, depending on each vizard’s degree of skill.

It should be noted that a vizard may not attain both Power Augmentation and Hollow Control at a level of Grand Master.

Beyond the donning of the mask, however, there are those scant few vizards who have successfully achieved such a degree of mastery or control over their inner hollow that they can mimic the Resurreccion of the Arrancar to some degree. This release requires a Master rank in either Power Augmentation or Hollow Control, and unlike the vizard mask, there is no universal boost or ability gained through Resurreccion. Each vizard’s Resurreccion is entirely unique, and its effects are determined only when a vizard character achieves this level of power and unlocks the release.