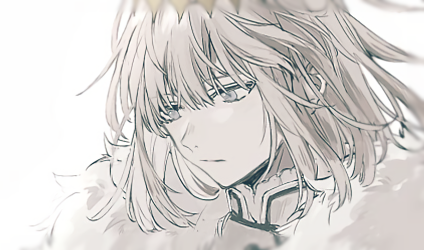 Psychological Analysis
To his very core, Sen is a gentle, playful soul, radiant in kindness and softness to all of those who surround him. Those who know him would describe him as possessing a pure heart and mind, seeking only to provide a hand to the desperate and warmth to the lonely. He always acts with a sense of genuinity to his character, imparting true concern in unfortunate circumstances, as well as tears in mourning.

However, Sen’s definition of ‘the right way’ and the typical person’s occasionally do not align. Though he is forever intent on performing the best for others, it may trail off into harmful actions, to his eyes such a thing only being seen as necessary sacrifices for the better end. If he believes it is the right course of action, he will put others through hell and torment if it would create a better end result, and that isn’t to say he makes decisions based on ignorance - he will actively weigh the better or worse of a situation’s outcome, and if he determines the better weighs, he will see it all as good.

While Sen’s behavior can go into being described as incredibly deceptive, he - rather disturbingly - always means well and will execute even the vilest things with that same gentle smile as when he offers sanctuary to another. Very little capacity for doubt exists in his mind, only the vision of whatever he has decided is best for a situation, and the incredible will to execute it no matter what. That isn’t to say he is wholly incapable of his course being changed, however - if he is presented with a sufficient enough reason to believe what he is doing is not for the better in the end, he will consider it, but such an instance does not often occur in the most expected way.

Sen’s home nestled safely in the wilds of Japan, a small settlement of humans and dragons who lived harmoniously despite the condition of the world at the time, attacked under the cover of darkness by an unknown force. Mother and Father had told him stories of those who wished to eradicate their kind, but the young boy would not have fathomed such tragedy would occur.

His very being was wracked with pain and torment, receiving the brunt of the anguish of his friends, his family, his playmates, huddled in terror within the wreckage of his own home, frozen and helpless.

It wasn’t until a ghostly shriek tore into the night, was the young boy’s fate decided.

A shape in the darkness tore through the horror, towards him, pulling him from the wreckage and into the sky, unseen by those below.

His savior was a great beast - one of the last and oldest dragons left in Japan, dubbed Tsukuyomi by any who knew of him in the past, having taken the child to a small island he had hidden with his power with the assistance of his partner, Amaterasu. Both beasts were the only means for any dragons they saved to survive in the region, but such an arrangement would not last forever - the years wore on them, and they needed a solution for their kin to survive, and such a solution was found in this human child - possessing the spirit of a dragon, yet the life of a human.

Tsukuyomi would take the part of his father, teaching him of dragonkind and how best to put the boy’s attributes to use, training him in magic and combat, while Amaterasu took the part of his mother, having used the human identity she had crafted as a way to introduce and raise Sen amongst humanity, forcibly exposing the sensitive child to the light and darkness that surrounded the hearts of many in order to both make him used to sensing the intent of others, as well as raise him as a human child to teach him of how their world works, shutting down any reminiscence of his old life as a waste of his talents and potential.

At the age of seventeen, the day would come where the dragons were at the edge of expiring. Brought before them, he was given a choice - to either remain a human and allow dragonkind to wither away, or to take on his life’s mission to save them. Raised and led to the correct decision, he wished to tend to dragonkind, and with such a decision the two dragons were pleased, though they wanted full assurance that their will would be carried out, by giving the boy an ounce of their power.

He offered each an arm, both biting him terribly to the point of tears, remaining resolute with his bleeding wounds as they would then offer the second posit of their essence - a dish which both would spill fresh blood into, and offer to the boy to drink. His arms wounded, and his body shuddered with pain from consuming the blood of beasts, he remained adamant in carrying his mission, as the two dragons perished before him.

Their final gifts: A hand of destruction, and a hand of creation, as they bid farewell to their current lives, and a greeting to their incarnates - two small infant dragons before the mourning child in their place, seeking warmth from each other even then. Their only protection was gone, and thus Sen had to lead the survivors off to parts elsewhere.

-Sen goes to China at this point-

Permissions in this forum:
You cannot reply to topics in this forum
Who is online?
In total there are 9 users online :: 0 Registered, 0 Hidden and 9 Guests