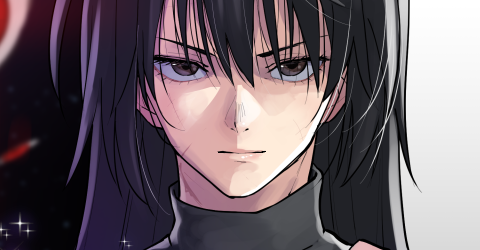 KOIZUMI SHISHIYUKI | FOUR-DEATH SNOW
It had been a long while since Shishiyuki last spoke with her nephew, and considering all that had occurred since that last time, it felt long overdue. Kasha was, after all, one of her closest confidants, someone she felt she could trust far more than many of the family's elders.

"Kasha, I hope I've not requested your company at an inopportune time."

She'd sent a letter to the Ho'oh Kanmuri Ken dojo stating that she would be visiting, and she'd arrived at the exact minute she stated in the letter. After all, the story of Kasha's unexpected visitor had made its way to her, and she didn't imagine he had appreciated that even from a friend. This was, after all, supposed to be a pleasant meeting for the two of them to speak, and she didn't intend to start off on a bad foot by coming unannounced.

KOIZUMI KASHA
"No, it's quite alright."

He said with a small bow to the head, Kasha did make a habit to keep the appearances of the difference in their position despite being more friendly that that. Maybe if he tried enough his teacher would get the not so subtle hint. He was not hopeful for it though.

It was only courteous to accept tea offered in hospitality, naturally, and Shishiyuki knew that Kasha cared about maintaining those appearances. Of course, that was part of why she had come here, as that had sat in her mind for a while now. The two of them had spoken on the topic of maintaining this facade before, and now she felt it almost obligatory to follow up on that matter in his life.

"Have you been well? I heard talk of your transfer to the 8th Division. Has work there been to your taste?"

In truth, Shishiyuki had found the division fairly respectable from her own view of it, but then again, she'd not properly interacted with the captain in any particular capacity. The two had been in the same division, briefly, but even then it had been little more than professional interaction.

"I imagine the 5th was not exactly to your liking."

It's convenient that he'd come to expect that response and so he had gone out of his way to prepare it already since she'd given him such a specific time and there was no doubt she would make it not a second later. So he guided her in

"It has been more preferrable indeed. Their work is more general and hollistic than the fifth was, and you are now a vice-captain of the Gotei United as well?"

Kasha did suppose congradulations were in order but it was more surprising that she'd have picked that position in particular. It did clearly lead to her current look which he abstained any reaction towards, his poker face was quite good like that.

KOIZUMI SHISHIYUKI | FOUR-DEATH SNOW
"I am indeed. I've cast aside those days of maintaining illusions of myself. That isn't any way to live."

Glancing at Kasha as she took her seat, she had a distinct feeling that he likely wasn't taking his own advice any time soon. Then again, she supposed that might not be entirely true. She'd kept up enough to know that friend of his had gone over to the 8th Division as well, after all, but Shishiyuki wasn't the sort to simply pry into Kasha's affairs behind his back.

"This is a new age for not only the Seireitei, but for the Koizumi as a house, Kasha. Hiding ourselves behind veils of secrecy has created a rather grave atmosphere around us. I hope that the younger generations will grasp that opportunity."

It was a relatively pointed comment, but there was a difference between the multifaceted, needlessly obtuse words of the traditional nobility, and simple tact. After all, there was no doubt as to what Shishiyuki had meant with her comment. She simply didn't wish to press him outright.

KOIZUMI KASHA
"I see you have finally made up your mind on the matter then."

The younger Koizumi taking a sip while ruminating on their earlier meetings where she never really made up her mind. Stating it was all nonsense and yet she abided those principles regardless, he should be quite happy after all yet his teacher would no doubt be the one that liked to hear it the most. She was always such a problem about drawing attention to herself.

At the same time he didn't really take to the pointed implication of the words. The simple this is what you wanted, right? That seemed true and a valid conclusion and yet he didn't jump with glee or forsake the habits which he held disdain for.

How hypocritical of him.

Shishiyuki certainly could have waxed poetic on the happiness she'd found in her life, in how much more rewarding her time with Makoto had become, but that all felt as though it would add rather little to the conversation at hand. It was quite personal, after all, and while she wasn't opposed to sharing it necessarily, it felt selfish to speak on.

"I ought to ask what you will do from here on. I will naturally support you in whatever endeavors you wish to pursue."

It was the least that she could do for him, really, but she would have done it regardless. After all, it wasn't as if Shishiyuki had done all of this simply to overthrow her family's order. It had been specifically for the good of the house, and Kasha was a part of the Koizumi. But he had been quite helpful to her, someone she could earnestly trust. It would have been wrong of her not to do what she could for him in turn.

KOIZUMI KASHA
What a question she posed, what did he do from here now that she had lifted the veil or the metaphorial chains? A slave to tradition which had suddenly been cast aside and deemed unnecessary he was liberated from any shackles or obligations to maintain this charade to others and yet he'd never given a thought to what life would look like if that had ever happened.

Sure he'd spent a good amount of time frustrated by these things in the Academy. Always performing with mediocracy and acting less competent than he was but now there was none of that to worry about.

He answered sipping at his tea.

KOIZUMI SHISHIYUKI | FOUR-DEATH SNOW
If she were a harsher woman, Shishiyuki might have thought ill of Kasha for that answer. After all, he'd seemed rather sure in this path when they'd spoken. But she knew that he was still young, and that this entire change had ultimately been unexpected. She could hardly dare to think that he ought to have been fully prepared for such a radical shift.

"No? Well, it is certainly worth thinking about. And, if I may, speaking on the matter may help to elucidate things for you. Even if not with me, perhaps with one of your friends."

Asking any of the Koizumi to simply "open up" was a fairly tall order, and Shishiyuki knew that perfectly well. It was why she had made a point to suggest that he have that deeper conversation with someone else, if he felt more comfortable with that.

"I know that it is not easy to simply declare new direction for oneself, but that is why I wish to help however I may. You, after all, were the one who advised me on this. It would be simply inconceivable that I not ensure you flourish."

KOIZUMI KASHA
Well, he did suppose that Kyo's dream of being a captain and asking him to be his vice-captain was a start. That was something that would take him into the spotlight a bit and discard that whole subtefuge that he carried around and yet that wasn't really his own dream or anything. He was happy to just go with the flow, complain about a situation that he couldn't change and then accept it before repeating.

"I suppose you're right."

He answered again while his eyes were a little distant, far more focused on his own thoughts than Shishiyuki right now. It was pretty disrespectful to be so absentminded in front of the head of his family but she had the limelight on him and that was an uncomfortable feeling. He didn't mind being invisible, he wanted the acknowledgement for all his work but he didn't want the attention that came with it.