Living in the land of the dead [zetsurin]

Living in the land of the dead [zetsurin]

The white haired girl ran as quickly as she could through the blackened pathway, the wall collapsing behind her as she hurried along. Her skin had a bronze like tan as her brown eyes flickered behind her for a second before looking ahead again. Her body seemed to be nineteen years of age, though the strength and stamina she was showing was far beyond any athlete of that age. Grimacing a bit, she pushed forward, spotting the entrance up ahead of her. Her eyes set in determination; she pushed forward in a final sprint as she shot through the exit ahead of her.

Looking around her the girl frowned a bit, taking in the new place. She was standing in the middle of a dirt road, people bustling around her as they went from one shop to another. Sighing softly, Tamari started to walk around, looking at everything that was going on. She kept her hand curled in to fists, unsure if someone may try to attack her without a warning. She didn’t really want to fight, but if someone was going to fight with her she was going to defend herself. As she walked, every so often she would bump in to someone, apologizing profusely towards them whenever she did. After a while she sighed, slumping over to the side of the road. Today had not gone as she had hoped; she was almost wishing she had never opened that stupid gateway in the first place. After all, who here would be willing to teach her what she wished to know? She was a human being, a living person. Sasha had seemed to think that coming here was a bad idea, and perhaps she had a point. Well, only time would tell now, Tamari wasn’t ready to leave just yet.
__________________
"Beauty is in the eye of the beholder."
"Of course it is. Are YOU going to question beholder's artistic sense?" 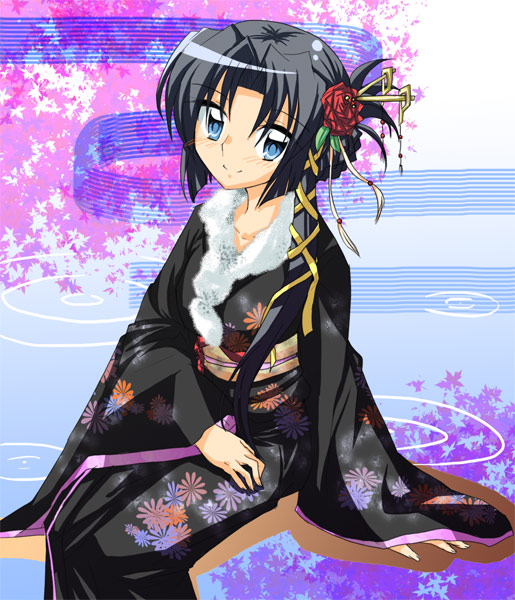 “ umm excuse me miss… but may I ask why you are here?” Isae would tap on the white haired girl’s shoulder. A small child hugged on to isae’s neck. “Aaa... sorry to bother you… but I couldn't help but notice you look a bit troubled.” She would be smiling at the girl.” I don’t mean to be nosey you just seem a bit out of place.. Maybe you just recently passed over to this side?”

Isae was dressed in a black kimono with a rather lovely flower pattern on it. Her hair was also done up nicely. Witch was not really normal for her. Isae gently sit the child down and pat its head. Pulling out a small bag and placing it in the child’s hands. “now run along ok? And try to stay out of trouble.” Looking over to the light haired girl. “Passing over if hardest on the kids. They don't got the physical strength to work.. And not many people are willing to help them and their left all alone here. How about you? Why do you look so upset?”
__________________

Tamari jumped in surprise as she felt a tap on her shoulder, spinning around with her fist drawn back, but stopped when she saw the woman there. Letting out a soft sigh, she relaxed her body and took a deep breath. Standing there, she watched as the woman comforted the child that was with her before sending the child off. At the same time she listened to everything the woman said, shaking her head in the end.

“Sorry, I’m just a bit stressed today… to be honest, I feel kinda out of place here. I guess I should go back already, I doubt I’ll find out anything about kido here anyway…”

Grumbling a bit, she closed her eyes, willing the zanpaktou of Sasha to materialize in her hand. Yawning a bit as it appeared in her left hand, looking at the black squarish handle, then along the five foot blade as she held it in her hand. Seemingly lost in thought, she whispered softly towards the blade.

“You were right Sasha, I shouldn’t have come. Sorry for not trusting your words, they were right on the money. After all, a living human has no place in the land of the dead… don’t worry, I’ll return your zanpaktou to you soon.”
__________________
"Beauty is in the eye of the beholder."
"Of course it is. Are YOU going to question beholder's artistic sense?"

"Sasha? Is that the name of your zanpaktou? Am I to take it you're… how should I put it? Freelancing? I know that all soul reapers that work for the Gotei 13 can easily go to the academy to learn the kido arts. So if you’re looking out here for someone you must not be with them. ” she would smile at the girl and tilt her head slightly to the left. “ you being a Ziamichi... That does make it a little hard don’t it? Even if you do got a Shinigami inside you... Most people in the Gotei 13 are closed minded on these things. They would undoubtedly have you restrained. The act of transferring your power to a human is against the law after all and I am sure a Ziamichi still breaks that law.” Knowing she was a Ziamichi was rather easy after seeing her pull out a zanpaktou. after all no normal human could pull one out like that.

The girl would rest her hand under her chin.“ let’s say there is someone not so closed minded. Let’s just say I know someone that could show you the kido arts without the Gotei 13 needing to be involved... I would also need to know some other things too before I could take you to them. Like your name for one. Also how you come to harbor the soul of a shinigami within you? And lastly what do you want to know kido for? “
__________________

Tamari turned around as the woman spoke, looking at her strangely. She listened intently, and her eyes widened when she heard that the woman might know someone who could teach her kido, despite the fact that most other shinigami would see her existence as a crime. Turning towards her, she sighed, letting the zanpaktou return to Sasha, its form disappearing from her hand.

“Well, seems that I’ll have to do a fair amount of explaining to get what I want then… I just hope you’re not pulling my leg with this. Anyway, my name is Tamari Osamerukami. The shinigami within me is Sasha Osamerukami, and we’ve been together since birth.”

Sighing, she leaned against a nearby building and closed her eyes before continuing.

“When I was born, I had two souls within my body, mine, the one to whom the body belonged to, and Sasha’s, who was not attached to my body. I feel sorry for her… unable to talk with anybody but myself… it must have been hard on her. Anyways, she wasn’t always a shinigami. The first time I saw her as one was when I finished elementary school and returned to my parents place. That was about three hundred years ago now…”

She sighed, thinking back on her memories of the times with her parents. A saddened look came over her face, and after a few minutes she shook her head, clearing it of those thoughts.

“So, have I answered all your questions… ah, no, you wanted to know why I wanted to learn kido… isn’t curiosity enough of a reason?”

“hmmm is curiosity enough of a reason. That can be answered two different ways. If you want to know simply what kido is and what it is capable of doing . then I would think curiosity is enough as you would never be able to use a kido spell just from knowing what it does and its name. But let’s say you wanted to know more than just the knowledge of what kido is. Say You wanted to know how to utilize kido. that changes it a bit doesn’t it? A kido spell casted by a captain could take out half this town in one shot. It can easily be a weapon of mass destruction. At the same time a kido can be used to protect things by placing a barrier around it. Even then a kido can be used as a tool for healing others. And once more a kido can be used for sealing things away for eternity. Do you think pure curiosity is a good reason to learn how to use such a thing?”

The girl would stand back up on to her feet. “ kido takes a lot of time to learn as well. Some shorter than others some longer. Another good reason curiosity is not all ways enough. For some people curiosity quickly dies when things get hard and they give up. In the end thay lose interest and all they managed to do was waist their own time... But even worse than that they wasted their Teachers time. So do you want to stick with curiosity as your answer?”
__________________