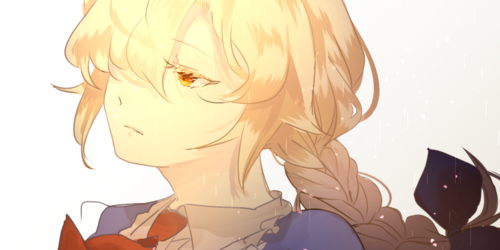 "Without question. The City of Lights is a remarkable symbol of innovation, one worthy of exceeding praise. Each man and woman who I've come across has treated me with nothing but respect and honor. I have yet to meet my fellow Sternritter but I am confident that we are more than capable of working together." Freyja pull away from the woman as she reformed her chair from ambient reishi in the air.

Forming words was still somewhat difficult for her in Helle's presence. It felt so surreal to finally achieve the first part of her promise towards her adopted father. To truly honor his memory, she would have to train and improve to ensure that the second part would be achieved, hopefully with overwhelming success.

"Apart from the City of Lights, I've been well. There isn't much to offer in the form of eventfulness considering I've only spent a short time here. ."

. "It is a nice and quiet city, but that is another wonder of it. After so many trials and tribulations, a place of relative quietness is much appreciated. Besides, the missions that many partake in prove exciting enough."

Freyja will soon discover the quirkiness of her allies. It is but a matter of time. Helle, however, is pleased to know that the other woman has found herself situated at least. The city tries its best to be welcoming to all, something to truly be proud of. Helle hopes she'll be able to travel about soon enough, but she is simply alright being alive as she is. There is room for growth for the woman. It seems Helle now has another to take with herself down the road to a successful recovery.

"I recommend the coasts of this island. The rolling waves and ocean breeze prove delightful. I cannot wait to return to it. Also, I am sure the training facilities will help you find something eventful. There are always ready individuals looking for a partner for a round or two."

Freyja would silently nod as she listened to her director speak, a gentle smile beaming in her expression as she spoke about the city and the other places she could find contentment in. Listening to her firsthand experience would be helpful, considering that she was a newly recruited coordinator who was aiming to learn the finer nuances of the city. Any time spent with Helle would be very much welcomed. She yearned to know the woman and what led her here, her purpose, and of course, to spend days outside of the bed when her recovery had reached a point where she could operate successfully and without worry. For now, any day spent at her side would be enough.

"That sounds as though it would be a fulfilling experience. I shall certainly find time to go there and experience a similar delight, if I can. To be sure, I did spend my first day on a beach, so reliving the experience would be quite lovely. I even met someone who I believe will be fighting alongside us. As for training, I certainly aim to face my fellow division members to experience a display of their skill and prowess firsthand. Who knows, with enough recovery, maybe you and me could experience a fine spar. Of course, that is neither here nor there. To simply share your company and support you is fulfilling enough."

"Rather lovely of you, dear. Do not fret too harshly over me, however. I have plenty of support as is. That is something you should focus on. Find friends, a group that you can support and will support you. Though, do not forget the Vandenreich in the process."

Helle found herself adjusting, sitting back further on her bed, feeling her head sink into the pillow. With a sigh, she found herself gazing up at the ceiling, a distant look in her eyes. The thought of one day walking again is nice, but it does remind her of her morbid situation. The future is till bleak with the scientist and doctors still at work, trying to find a way to help her. Reports say they are reaching something, but the wait for their brilliance is ever torturous.

"Be that as it may, it never hurts to have an extra hand to assist, no?" Freyja would smile warmly, speaking with a sort of mirthful joy in her voice that she find unfamiliar yet very much welcomed. For what else was she, then, but elated beyond words? She had been the one. The last remaining tether to a family who had long since been lost to the records of time. She had accomplished her late adoptive father's wish. To find Helle and know that she still lived.

Now, she had to accomplish the second mission and aim to protect her with every measure and iota of her strength brought to bear. She knew not what fate had befallen her on her mission, knew not the enemy or force that left her in this position.

Her aim now was only to make sure all that had happened would never be repeated again. Even so, her next words still nevertheless resonated with Freyja. She had been entertaining the idea somewhat but had yet to embrace it wholeheartedly.

To find friends, to be supported, to support others... it was all so new to her. Truth be told, she hoped that Helle would be there to support her in those unfamiliar waters, a territory she had never explored as much as she ought to in the past. Moving her hand forward to hold Helle's hand, Freyja would smile as she nodded.

"One day indeed, director. Know that even with all the support that surrounds you now, I will always aim to remain at your side, to support you. I knew not what to imagine when I heard you were a member of the Vandenreich or what I'd expect when we came face to face but gazing upon you now, I've no doubts that the one day you speak of will come, that their is strength within you yet, that you will rise from this and be ever greater than before. At your side, I will be there to support you... as we embrace this future together. I truly wish nothing but the best for you, Helle."

Such significant words and lofty promises for their first meeting. Even so, Freyja would aim to make sure that every word uttered was honored in kind. She had ascertained the treasure she yearned for a significant portion of her life. The Valkyrie would not let her ruler be felled again.