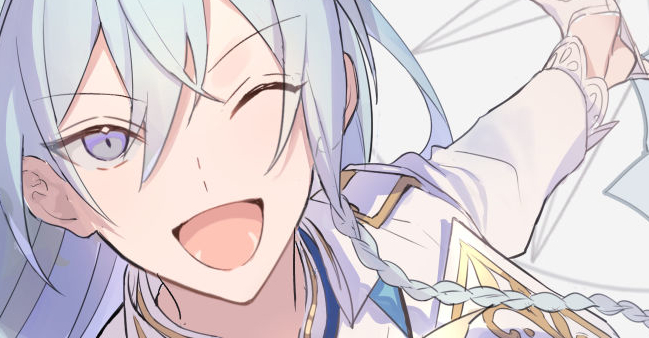 Psychological Analysis
The nature of the Iramasha, spirits of nature and guardians of the world, would naturally make one think that there’s perhaps a certain degree of maturity inherent to them. That is, however, quite apparently not the case with regard to Levi di Lotic. He is a free spirit in the truest sense of the world, unwilling to abide by any expectations upon him and certainly not one to follow any sense of duty. If anything, being told to do something only makes him not wish to do it, and vice versa; the river, after all, always pushes back upon outside forces. Some would call this just him being difficult, though, and to that he usually just has an amused laugh in response.

Given his commitment to such things, one might think Levi is rather principled. This, too, is a wholly incorrect assessment. Levi in fact has no particular principles whatsoever, doing whatever strikes him in the moment. There is simply something about following his whims that is overwhelmingly preferable of a lifestyle for Levi, and if asked why he’s done something, there is a very, very strong chance that his explanation will simply be, “Why not?” If it’s fun, then it’s fun. If it isn’t, well, maybe it still will be.

RELATIONSHIPS
None at present, but he welcomes any offers!

BACKGROUND INFORMATION
In truth, there really isn’t much to tell about Levi’s life to this point. He’s not lived through any great tragedies, or had tremendous moments in his life that defined everything he feels he ought to be. There are no aims he has to live up to, no life goals which need achieving for his own pride. He’s just any other Iramasha, you know? Born one day to unremarkable parents, the Iramasha of Tranquil Waters and the Iramasha of Soft Sands, Levi never particularly wanted for anything as a child. He was not spoiled, per se, he just faced no real hardships. He was raised by loving parents, and his earliest years were wholly unremarkable.

Then again, for a spirit such as himself, an unremarkable life was far from ideal. He wanted adventure, excitement, danger even! He wanted to cut his path through the world and make something fascinating! So he simply left home. He packed his things, tossed them into a backpack, and off he went with barely a word of explanation to his parents. They understood, of course. It was just in the nature of a boy like him to leave home in such a way, and they had always expected it.

He took to wandering, and to this day that’s what he does. Nothing too exciting, after all; fighting and danger are a bit scary to someone like him. But he’s more than happy to see what sort of things he can make happen out there in the world. There is, of course, the big question of how much he’s ever accomplished as an Iramasha, and the answer to that is a resounding “nothing.” Levi has never spent any time actually pursuing the nature of his race beyond the barest basics, and even then, this was entirely in the service of simply finding it interesting at the moment. For now, he’s simply a stream coursing through the world.

EQUIPMENT
None at present.

RACIAL ABILITIES
While Levi does have access to the standard Iramasha racial abilities, at least in theory, he isn’t especially well-versed in any of them. One can expect very little from him with regard to any Iramasha abilities.

○ Aether Class Power: Levi’s Aether Class is a theoretically versatile one, as the nature of the Clear Blue Riverside is one which shifts according to nothing but its own whims. However, its most prominent and straightforward ability is the ability to “wash away,” for impurities and filth cannot be allowed in such a beautiful thing.

○ Aether Class Abilities:
○ Refreshing Drink: The simplest ability within Levi’s Aether Class, and currently the only one he’s really aware of, Refreshing Drink is rather self-explanatory. By making a small amount of pure water infused with Aether, Levi can purge mundane toxins, diseases, and other such ailments from one’s body. Anything more powerful than the mundane, such as spiritual poisons, are currently outside his area of expertise. It’s great for hangovers, though!

Approved.
Don't forget to claim your FCs and positions.

Comments/Notes: Whoa. Look at that. Another one.

Permissions in this forum:
You cannot reply to topics in this forum
Who is online?
In total there are 28 users online :: 4 Registered, 0 Hidden and 24 Guests