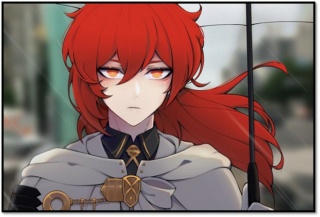 ALASTAIR EISFLUCH | STERNRITTER
As suspected, this Gillian was not a rogue creature even after it had just formed. Alastair glanced between the demon and its pet, given scarcely an instant to study the damage done by his fellow Quincy before the stream of ceros began. It was fortunate that the intention was to conceal rather than attack directly, as it made the dangerous attacks much easier to evade than were the creature trying to outright kill them, but it was effective in scattering soldiers from both Delta 2 and Omega 3 across the battlefield. He silently hoped that Jackson had the sense to keep his forces focused upon the main threat, even if the target became obscured by the dust they had the numbers to rain arrows down upon them.

Even for all the haze, it was certainly hard to mask the form of such a gigantic hollow and so he continued to fire away with his weapon. The squad should follow his lead, and keep up the ranged harassment until perhaps they could draw their two foes apart to divide and conquer.

He was barely stopping to aim before firing every arrow, knowing that quantity mattered now as much as quality, and instead kept himself moving. A quick step into the sky to look above the debris before disappearing back into the storm, the focus on keeping an eye on all elements of the battlefield for whatever trick this demon had up his sleeve next.


The blade ripped itself from Yaksha's grip and body all at once, with as much resistance as someone squeezing a cookie; perfectly expectable, given the preparations he'd made for the incoming attack. His own skin and epidermis was already returning at the same time that his musculature and necessary organs pressed their way back into his core, leaving him to sigh in faint irritation as he watched the demon they were fighting do the same. A war of attrition wasn't ideal here, and it certainly meant that trying to fight this creature was going to be a dangerous venture if only because he had the home field advantage. His gillian was soaking blows ably, and destroying the capacity for the people present to properly communicate, and he himself had to do little other than just not die to win at this rate.

They needed to dramatically change the game state somehow, and that meant that Yaksha needed to work out some effective manner to use his trump card. He began to hover lower towards the ground, even as he watched the demon land in a crater of his own creation, to be pelted by projectiles rapidly. They didn't seem to do any more damage than before, but they did look quite effective at keeping him in one spot, for now. Until the gillian began to charge a massive cero, clearly prepared to devastate the battlefield. Yaksha rose one hand towards the creature, scythe clutched clumsily near the base; he was far from a master swordsman, but even so his form offered him enough strength to wield these clunky tools with a bit more ease.

He swung the blade, along with his hand, preparing to soak as much of the blow as he reasonably could, as he formed his own cero to meet the projectile before it arrived. His own production was far sloppier and less powerful, but it should still serve suitably to keep this -thing- from fully devastating them. He fired off his own cero as the beam first began to sluice its way closer to the Vandenreich, to deflect it or slow it just enough for the quincies to prepare their own defensive measures.

As this went on, his other head spoke, never taking its eyes off of the demon.

"Commander. How confident are you with your accuracy, at this range?"
Coding Altered From: [The Frost]