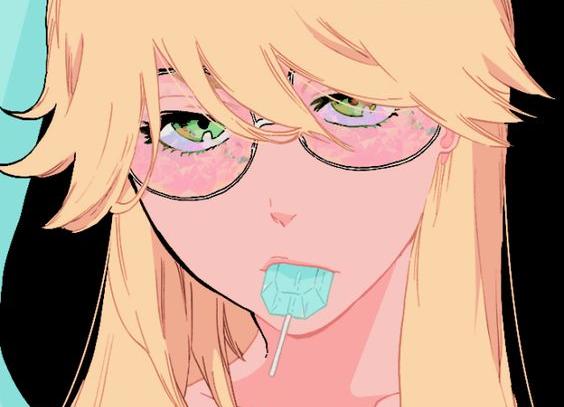 Candice Catnipp | Heiress Extraordinaire
Rather unbeknownst to Vivyan, her innocent compliments were only continuing to feed Candice's ever-present ego. Something that Candice enjoyed tremendously, and therefore wanted to subtly encourage. If it made Giselle a little jealous then that was an added bonus, she'd brought this on herself after all!

"I suppose there are always cameras around when I am working, someone always wants to know where I've been or what I've been up to." As the girl blushed, Candi's expression fell to a somewhat sad frown as if she was trying to empathise with her, "Oh, my dear, that's simply terrible! I'm glad you're on a nicer path now though, and clearly keeping better company too."

Her smile brightened once more, as she glanced back to the brooding Giselle, who had so suddenly withdrawn the hand from her back, then she cocked her head to the side slightly as if to silently ask 'What's up?'. Whatever was going on with her all of a sudden? It looked more like she was actually upset than jealous, and she'd hardly expected that to see that colour of Giselle so quickly. Candi was the emotional one, right? Even she knew that.

"Vee and Zee, huh, what am I to make of that? Are they giving all of you Sternritters a letter of your own nowadays?"

She placed a finger to her lips as if contemplating the statement, though in actuality she was contemplating where they might dine. Giselle had passed up her chance to choose a restaurant, even though she had been the one to suggest it, so if she was going to mope about then she would have to do it at a nicer establishment now. A few places came to mind, namely those she had been recommended by business partners or read about in certain higher-end magazines that were often stocked on her jet for when she was flying around the world. Her smile only grew more mischievous as she turned back to respond.

"There's this lovely rooftop bar nearby, I think. One of my friends recommended it to me, actually, he said the brunch was to die for and the views were lovely too. We should go, I reckon they can make some space for Candice Catnipp and her dashing Sternritter entourage. It'll be fun and, -oh Vee- don't you worry, my little treat."

There was perhaps another veiled insult in that ending of that last comment, in that she had simply assumed it would be too much for Vivyan, but she had not intended it maliciously this time. Instead, she looked back to Giselle and offered out her hand. If she continued to be glum then, by God, Candi would carry her if she had to.

"Ahh, yup! Nicer. Way nicer," She'd grin awkwardly. Candi was putting out like a trillion signals and none of them were easy to read, so going with the ol' Mum-approved 'smile and nod' approach worked pretty well here. However as she was speaking to Candi, her gaze did switch back to Giselle occasionally, noticing more and more how spaced and distant she seemed from the conversation, only to jarringly perk up to answer her question. She swore she heard some kind of noise come from her direction, and in general she looked pretty... Bunched up.

"Oh, uh, that's great Lady Catnipp!" Ugh, even saying it again was an awkward jumble on the tongue... "Could you lead the way? I don't know that place. Maybe even tell us some more about it, or even about how your day's been going?"

Hopefully with Candice not paying as much attention, she'd go beside Giselle, and speak in a more hushed tone,

"Hey, you okay?" She'd nudge the woman's arm, "You look reaaallyyy... Spacey. You feeling sick or something?"

She'd catch herself, raising her eyebrows as she realized how potentially stupid her statement was, "...Wait can you even get sick? Nevermind-nevermind, point is, wanted to check on you."

Giselle was already calming down, now that she had a moment to ...parse things a little, she gave Candice a wry look. Oh she saw exactly what the blonde was getting all up to, and she sure as hell was going to do something about THAT later when Viv wasn't here. But for the time being, she glanced over to Vee and quirked a brow. Vee really was so childlike. "I'm alright, The rooftop place sounds good. I'm sure you two will have tons to talk about. Buuuuuuuuut Ahhhhhhhweh... I actually already did have something to eat not that long ago. Whyyyyy don't YOU two go enjoy your food? I can catch up with you guys later." A Snide, sly smirk crawled across Giselle's face as she looked DIRECTLY at Candice. After all, CANDICE was the one who had travelled all the way here for .... 'business'~

She was all too eager to see what would happen when Candice got to chill without Giselle there to buffer between her and Vee's weirdness. Was she using Vee as a weapon in this little game she was playing with Candice? Absotively fuckolutely. Candice either had the option to A: go with the flow and maintain the illussion that she wasn't REALLY here to see Giselle, and then have to go spend a dinner with Vee while Giselle herself went off and got herself some ice cream or some shit. OR, she could appeal and ask Giselle to come along. It wasn't really a DIRECT form of begging, but ANY sort of sign that Candice sought her presence was something she thoroughly enjoyed. Mainly because it simply wasn't usually in Candice's character to go TOO out of her way for such things.

And as for Vee being subjected to having to spend a dinner with a potentially Irritated Candice? Well, she MAY get zapped, or just have an awful time. But that was a sacrifice Giselle was willing to make on Vee's behalf.

Candice Catnipp | Heiress Extraordinaire
There was a particular moment, as Giselle suddenly announced that she wanted to distance herself even further from the other pair, where Candice's visage cracked. Giselle would notice, as she was looking at her and smiling coyly, but Vivyan might have been caught up in the sudden announcement. That hand she had outstretched shot back to her side, a disappointed grimace sliding across her face as she pouted briefly before that same easy smile found itself again on her lips. She would have carried her if Giselle was being mopey, but she wasn't going to beg. Candice Catnipp did not beg for anything.

"Fine, sure, whatever. If you aren't up to it then there's no point forcing yourself. Get some rest and enjoy your time off."

She turned away from Giselle, pivoting on her heels, and offered out her hand to Vee this time. She would suffice for some afternoon entertainment at least, and it was clear that Z was trying to mess with her. Whatever she was trying to do, Candice didn't quite care. For whatever reason, she didn't want to spend time with her and that was enough of an insult to find oneself in the proverbial doghouse. No longer did she even look in Giselle's direction, a quiet seeping frustration slowly ebbing from her words as she tried to quickly expedite an exit from the suddenly awkward situation.

"Come on, Vee. If Zee isn't feeling well then we should give her some space. The bar shouldn't be too far away, you know where the next district along is, right? Let's go have a little natter you and me, I would love to discuss some of the latest industry moves with an outsider. Get a fresh new perspective."

1, 2
Permissions in this forum:
You cannot reply to topics in this forum
Who is online?
In total there are 20 users online :: 1 Registered, 0 Hidden and 19 Guests