» Appearance Written: Kangaroo turned Hollow. Where there was once brown-blonde fur is the sickly violet and maroon shades of a hollow, eyes filled with yellow apparitions of fury. Multiple scars cross her body, showing the prowess of combat she possessed in life, still bound with the bandages that left her to death. Cnaguro's mask bites underneath her jaw, uniting across the back of her skull; blank eyes staring backwards. This takes place of one of her ears, the other carrying smoldering embers in her passive state. Fairly large in size, Canguro dwarfs her size in life, standing four meters tall. An equally massive tail accompanies her, the tip of which is blackened in soot. 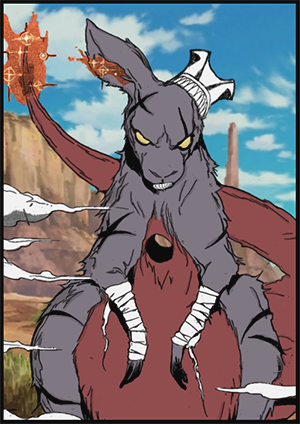 » Personality: There is no person, much less personality, inhabiting Canguro. There is, however, one long cord of emotion - an all consuming rage.

» High-Speed Regeneration: Generally, Canguro has a rather slow ability to regenerate, helping to aide in her collection of scars. It should be recognized, however, that her regeneration rate is enhanced with her own ability - Tezcatlipoca. In her peak, what would take a day to heal now takes moments.

» Kūmon: Seemingly unaware of her ability to manipulate the garganta, Canguro has been known to instinctively use kūmon, both in situations to further chase prey and flee. This is a fairly clumsy execution of the ability, and takes more time for the creature than more intelligent hollow.

» Toxic Burn: Canguro's aura - in its default state - does not possess the acidic quality of a hollow, processing a rather repressed reiryoku. Instead, the properties are transferred to the flames produced by her abilities; allowing it to burn in any situation, rather than act as true fire. This makes it capable of being resisted more easily by those with substantial reiryoku, but more stubborn to conventional means of removing fire.

» Berserker's Soul: A primitive mind, Canguro will, eventually, gain more sentience from the consumption of other hollows and humans. Before then, she is primal. When backed into a corner; the less of her there is, the higher her limits become.

» Canguro Patear: A standing kick performed by Canguro rolling backwards onto her tail, kicking forwards with both feet. The speed and force of this blow is of an outstanding class, beyond and above that of which she should be capable - physically. Any damage done to souls would be far more mitigated, as the attack temporarily snuffs the enhancing power of Tezcatlipoca as it is used.

» Tezcatlipoca: Canguro's abilities feast off her rage, growing in strength the more pissed off she gets. Condensed reiatsu is formed within her inner ear and the end of her tail, the flames sparking miniature suns in sparks - becoming more numerous as it empowers. These flames can burn targets, leaving a lasting burn from the hollow's aura. However, its true strength is that of augmentation, the height and volume of flame produced showing a correlative change to her physical abilities and limitations. The cost of reiryoku from this is not minimal, becoming more difficult to maintain at the highest levels.

» The First Sun: The fire burns, sparking with fluorescent yellow stars as Canguro exerts herself. Overall a 25% increase in physical output, her reiryoku singing weak fibers and spiritually unaware humans. [Requires in-combat post length of 0 or more. Can last 30 posts.]

» The Third Sun: A noticeable burst of rage envelops Canguro, the sparks flying innumerous in the trails of fire. Overall a 100% boost in physical output, her reiryoku sets non-spiritually aware races ablaze within short range, causing latent burns on more spiritually capable over long terms of exposure. Jaguar increases this output to 150% temporarily. [Requires in-combat post length of 8 or more. Can last 14 posts.]

» The Fourth Sun: The sparks shrink, noticeably lagging longer in the air before dissapearing. In a change of pace, Canguro's reiryoku condenses, further applying the acidic burn of her aura to physical attacks. This results in an overall physical output increase of 150%, becoming actively harder to defend against. Touching the floating sparks can light anything on fire, although its eat can be easily quenched. Jaguar increases this output to 225% temporarily, causing the sparks to explode when making contact. [Requires in-combat post length of 12 or more. Can last 10 posts.]

» The Fifth Sun: Immutable, inescapable rage. Canguro seethes, reiryoku shrinking further as the flames shriek in ferocity. Her aura all but disappears, skin tight - a suit of destruction. Where there was once fire is now a shower of exploding sparks, trailing a fiery napalm-like trail of acidic flames. This increases Canguro's overall physical output by 200%, rising to a peak of 400% during Jaguar, although it will prematurely end the effects of Tezcatlipoca, and preventing regeneration for an extended period of time following. [Requires in-combat post length of 16 or more. Can last 6 posts.]

» Jaguar: An attack born of absolute hatred, Jaguar requires Canguro to be in possession of the Third Sun or higher. Enforcing herself with an enormous amount of reiatsu, the flames of Tezcatlipoca explode. The fire envelops Canguro's entire body, momentarily allowing for a tackle at massively enhanced speed and power, burning through with the acidity and heat of her aura. This drastically lowers her output immediately afterwards, although this can be somewhat alleviated by progressing the cycle of the suns with further rage.

» Weak Point: As with many Hollow, the construction of Canguro's body is noticeably weak at one point - her one remaining ear. Where most hollow's weak points function where they can be killed the easiest, this causes fault in Canguro's abilities, rendering her no control of her own spiritual pressure. While this will not kill her, it will cripple her usage of Tezcatlipoca, and, for an extended time, her regeneration.

Permissions in this forum:
You cannot reply to topics in this forum
Who is online?
In total there are 11 users online :: 0 Registered, 0 Hidden and 11 Guests