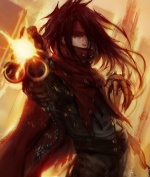 It had been nearly four to five days since Shannon had left his home. He had been resting from inn to inn just floating around somewhat clueless on what to do. He was currently walking down a long dirt road that spanned around half a mile with fields full of crops on either side. The wind was blowing a gentle breeze that smelled crisp and clean. Shannon took a deep breath, held it for a second, then slowly released it back into the atmosphere. "Crisp air filling my lungs is great after last night's travel" He spoke softly to himself.

Ahead in the distance as he came up over a small hill a great span of forest came into view. The trees had luscious green leaves and there was vibrant flora and fauna covering the border of the forest. "Wow...now that's a beautiful sight!" Shannon thought as a big grin grew on his face. He picked up his pace to somewhat of a jog for being excited about this new site. He hadn't seen many unique places such as the forest before him in his life due to him being so self reserved and shying away from the world at large.

He was now coming up on the forests' edge. He slowed his pace down and then came to a halt. Shannon staring up at the magnificent site, was in awe at the span of it all, but then Shannon had the thought just because it's beautiful doesn't mean not dangerous. He willed himself to be on guard and not to break focus. Deep breath. Exhaled. He now took the first step forward into the foreign woods and as he walked in he entered some kind of atmosphere because as soon as he stepped through, all the noises of the forest came about. He could hear all the animals walking through brush, the birds chirping in the trees, and the fish splashing about in water nearby. What a great sound he thought. He continued on walking and after 15 feet or so he came between some trees and found a small pond. He approached it and found a log to sit down on so he did. He looked at the clear water, got down on his knees, and dunked his head straight in to the chilling world of that pond. He opened his eyes and looked around and saw the fish swimming about. He smiled. What odd creatures he thought. Of course he had seen many fish before but he often questioned their true purpose.

He pulled his head up out of the cold water and shook his hair out. He then slicked it back and rested his back up on the log. Soon after Shannon's eyes had closed and he fell asleep very soundly to the forest orchestra.

Shannon's eyes shot open to the abrupt sound of smashing and massive thuds shaking the earth's mantle. He looked around as his hand quickly grasped the katana hilt. Off to the right of the pond some 80 feet away was a large creature thrashing around for some unknown reason. Shannon had a ping of intimidation , he hates to admit, for not knowing what this creature was. He had never seen something like it before. He walked slowly and cautiously towards the area the beast resided, hearing its roars and thrashing as he did. He went from tree to tree to try and remain unseen.

Shannon had came up about 20 feet on the monster and concealed himself behind a big oak. He peeked out and around at the creature and it was enormous. "Damn, that things huge...should i just leave or take it on?" he asked himself. The only reason Shannon would take on the massive beast would be to keep it from causing more mayhem. He reconsidered the thought over and over then decided. He'll do what he can to stop this...thing.

Shannon was devising a plan. He peeked out once again to size up the situation. As he was peeking the beast stopped moving completely and started sniffing at the air. "Hell...I think it picked up on my presence.."He whispered. The beast had done just that, turning towards Shannon's direction roaring viciously. Shannon was nervous but tried to remain calm. He tried to ease his presence to the monster but in that moment he heard thuds approaching him quickly. He had no time. He rolled to the right of the beast as it came crashing through the tree he was hiding behind. He ran around and approached the creature from behind. To be safe instead of a head on attack he charged his blade with Chi arch. He was about to unleash it but the beast spun around bringing his fist down. Shannon jumped back from the beast as the fist built a crater into the ground. As soon as he landed he let the arch fly with great speed at the monster. It connected to it's right wrist severing the hand from the arm.

The monster went into a berserk fury. "Well that pissed it off" Shannon said to himself. He readied himself for an oncoming attack. He assumed correct. The beast flew at him then spun in a circle whipping Shannon with it's tail. He put the sword down the length of his left arm so the tail hit it instead. Either way the blow sent him flying and he hit the ground, sliding through the dirt. He saw the beast approaching so he scooted behind a tree. "I have to re-evaluate it. It has great speed and a heavy hit so if I can just match that speed and repel the attacks, maybe i can get around to it's back." The monster was upon him swinging the remaining hand above Shannon's head obliterating the tree.

Shannon charged Chi to the souls of his feet and dashed forward away from the beast. He then charged at it and the creature swung his left arm downwards at him but he held the blade up and the hand and blade connected. He then quickly charged the blade extending its length and slashing the hand down and out away from him. He sped around behind the beast, jumped to it's back and ran up. When Shannon reached the peak of the beast's height he slashed it across the back of the neck disconnecting the head from body, then as the beast fell Shannon hopped down to the ground below it. "I'm so glad that's over...He hit me pretty good with that tail.."

Shannon walked over to a tree that was nearby, fell against it, and slid to the ground. He was exhausted. Using that much Chi was still a little much for him to do. He hadn't been using Chi for an awful long time now and had just gotten the hang of his techniques. He took a deep breath then and slouched down more as the night sky dimmed slowly. Soon after Shannon dosed off into a welcoming sleep.