Fuel for the Flames [PRIVATE | Rawk]

Fuel for the Flames [PRIVATE | Rawk]

The sound of the the pitter patter of a liquid falling to the ground echoed in the hollowed out room, that sound and the ragged breathing of a man that was restrained and looked as though he had seen better days. Standing around him were a few people, poor people and oppressed people that were commonly treated as the garbage of the Rukongai district and that man was their supposed shepherd that maintained the order of the district or at least that was his job but after time and since his appointment of managing it nothing had really changed, in fact crime was still just as rotten and rampart in the shadows of the buildings and many hidey holes.

So it was time for a punishment for this incompetency, said man happily left that evening a few days and was approached by a young woman. That young woman appeared to need help and willing to assist a pretty young girl like herself he was easily lead along until he was assaulted by a group of citizens. That is where we come to the current chapter of the story with a different lady that operated on an alias more so than a real name. As if she still had a real one. All that was left was for this little sparrow's shoulder to arrive. Information had been extracted, a little bit anyway. He was troublesome to do it violently with and Minerva had wondered if doing it subtly would've been smarter.

Regardless the result had to be the same, a punishment and that's why he was still alive. While she could very easily end the life of this man it was not her place to decide who lives and who dies, just to get answers for a man who she was waiting to see if there was anything he wanted to request before disposing of this waste of shinigami that was supposed to be their protector yet had nothing to show but his incompetence.

"I'm sure he won't be much longer. If you'd all like you can leave, you all have families to go back to. No need to worry about Mr. Nagare hmm?"

Watching as they slowly left and so it was only her dressed in exquisite orange fabric which left little to the imagination as was her occupation and role for this little coalition of citizens right now. She was left to wait for the man with the white hair with only the simple sound of.... Drip. Drip. Drip. 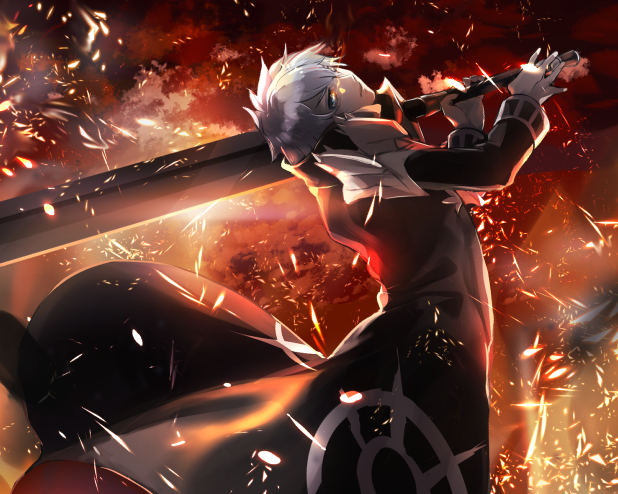 The sound of footsteps quietly came into earshot, echoing through the place as a man made his entrance. He was...so very unremarkable, truth be told. His hair was a plain white, his face was unremarkable in all ways. He did not smile, he did not frown. His clothing was unadorned, he wore no jewelry, and in all, he was not someone that would ever stick out in a crowd. Such was what made it all the more remarkable, then, that in this moment it seemed as though he was the most dangerous man in this room.

Though Julian smiled to Minerva, it was almost more of a courtesy than anything else. She was a useful member of the Coalition, but he suspected she felt far more toward him than merely the respect a fellow citizen had toward another. If he was correct, that was something to be dealt with in time, but for now he would let her work with them in this task. It was, after all, far greater than any of them individually.

Crouching down a bit to inspect the shinigami, he did nothing that one might expect of a hate-filled rebel. This man was, despite his terrible incompetence, still a person. If the Coalition treated the shinigami as subhumans, then they would only be acting in much the same way as the Gotei did. That was a thought that Julian simply could not abide, and so he instead stood, straightened his coat a touch, and turned his attention back toward his most skilled intelligencer.

“Splendidly done, little sparrow. I trust you've gotten all the information there is to be gained from him?”

With the arrival of the expected guest Minerva returned the gesture of courtesy with a lovely smile of her own, gently exercising her body with a pronounced stretch to loosen her up from her wait while Julian went to inspect their guest and treated him with more dignity than she had but that was what was necessary, it'd be nice if people would just tell her what she wanted to know but that wasn't the case and so more drastic means had to be employed which she had tried to be the most efficient with it. It was a twisted kind of humility that she exercised for people.

"Every little bit, I believe the little bird has sung all he knows. I'll leave his fate to you."

The sparrow observed curiously to see just what Julian did with him, given he had been able to see their identities she figured he was going to have to die but that was the unfortunate way this mostly went. For the greater good vile acts must be done one might say.

"If you'd like I can ease the process for him, if you have the same fate in mind as I do?"

It was a simple question but one that would only find itself made if Julian didn't immediately kill him. For her giving relief was a speciality and occupational skill which she was more than happy to employ just like her skills at gathering information from various circles and areas of Soul Society like a spider that lurked through the various buildings.

"Ah, yes. I suspect you and I have very much the same fate in mind. I of course would ask that you ease his suffering in this, for it would be only cruelty that we worsen these final moments of his."

Studying Minerva as he spoke, Julian had to admit that he was faintly impressed she had sone so well, and so thoroughly, on her own. Of course, this sort of admirable work was exactly what was expected of any member of the Coalition. Julian would never have brought Minerva into the fold if he did not believe her competent. He had cared for many in need before her, and many more since, yet few ever showed the promise that she had. The promise that she still showed.

"There is always a fine line to walk between pity and simple kindness.. Though we must kill, do not let it ever feel to you as though it is something to be lauded. The murder of even one's enemies is something that will, one day, ve wholly avoidable. But until such utopia arrives, always remember that it is a necessary evil, Minerva. Never disregard a life, no matter to whom it belongs. To let blood be shed with no meaning is the way of the Gotei, and we are certainly better than that."