Assault on the Bahamas [Covert WW4 Event, Ask To Join]

Assault on the Bahamas [Covert WW4 Event, Ask To Join] 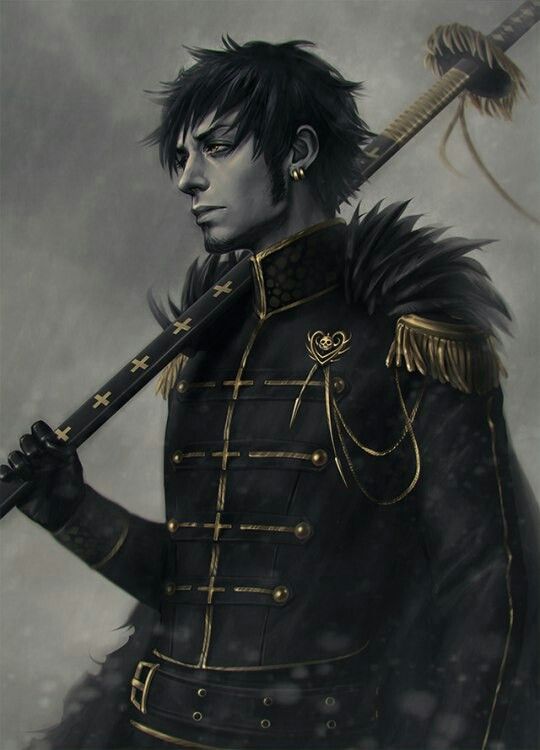 It had been a few days since Law had planned out his attack with Atlas and the crew, and they were now in transit, on an incrediby impressive ship. A few more followed behind them, to ensure that his advancement towards Florida would go smoothly. He'd been continuing to think over exactly how to best conduct this mission since they'd set sail. He'd also been given a uniform to represent his newfound allegiance. He wasn't that keen on it at first, but to be honest, it had grown on him fairly quickly. It also garnered respect, which he enjoyed.

It was nearing three in the morning now, and they were finally approaching the small island. He meant to attack immediately, and barring any complications, that was exactly what he would do. All lights on the ships had been darkened, and night vision goggles aided them in navigation. Law had located a small, discreet bay where the ships would almost certainly go unnoticed, which was luckily very near their final destination. They were entering it now.

He had been heavily planning for the past several days, reconsidering every option multiple times. He'd also been thinking about what he would do if there were any patrol ships that they happened upon. The ships were equipped with radio jammers, so immediate communication wouldn't be a problem. Obviously if they were seen they'd have to eliminate the patrol though, which meant that eventually it would be wondered about. He determined that it wouldn't be a problem, because they'd be striking too soon for it to raise much of an alarm.

In the end it turned out not to be a problem. They reached the shore without incident, and he asked the small group that would be accompanying him for the initial mission to assemble in his quarters for a final discussion. They did so promptly, which he appreciated, and then the discussion was underway.

"I'm pleased to see that you've all arrived so quickly. I've heard good things about all of you, so I'm sure this will go without a hitch. If there are any final concerns or questions about the plan, now would be the time to bring them up. Also, if any unexpected problems arise, you all obviously have the ability to react to them as you think is best. Do remember that we're being covert here though."

They all understood, but none of them had anything in particular to bring up. With that out of the way the began to move out. It was going to be a long night, and they still had several miles worth of walking before they'd be able to get started. Law wasted no time, giving everything a final once over, and then they departed.

They wasted no time, and traveled nonstop for almost an hour. Four in the morning. An excellent time to attack. Law looked around, scanning the area for anything that had potentially been missed initially. As he was doing so he noticed a patrol of two. He hadn't explicitly included this in the debriefing, but he had been fairly well prepared for it. He motioned with his hand for those around him to stay down, while he himself moved in closer stealthily.

He could tell that these two had no real combat ability to speak of, but even so he couldn't risk them being heard. Considering that for a moment, he then activated his room, altering the properties of the atmosphere contained within so that it could hardly carry sound waves at all. Another side effect of this was that the two trapped in his room would both have a rather difficult time breathing. Having accomplished that in a matter of ten or so seconds he closed in on the patrol while holding his breath, confirming that they were in fact Shadow Fall operatives.

With no doubt now in his mind, Law closed the remaining distance between them rapidly, readying his zanpakuto as he did so. They began to notice the shift about a quarter of the way through his room, and seemed to begin to panic. Luckily they wouldn't have to panic for long, as within the next second they were both cleanly bifurcated. One swing of Law's zanpakuto had been enough to take care of the rabble.

He dropped his room, now once more able to breath, and signaled to the team behind him to move up. They were now directly in front of the wall, seconds away from making their move. He wanted to waste very little time at this point, but he did look over all who were present to make sure that none of them looked visibly nervous or confused. It certainly wasn't something he was expecting, but you never knew. This was the first time he was working with these men, and it was also the first time he'd worked with Vastime. He wasn't so trusting or faithful to immediately trust them outright. As he looked them over he noted that they all seemed to be in states of perfect calm and assurance. That was good, that was what he'd hoped for. He then gestured for all of them to take their places, and once they'd done so he gave one final motion to act, and scaled the wall almost instantly.

They all scaled the wall simultaneously, and Ghost took up his position as sniper. Law made sure he was well and truly out of sight before descending, which took only fraction of a second. Savage accompanied him around the small western perimeter of the armory. They remained silent, not attracting any attention to themselves as they made their way around. When they reached the corner of the wall, Law pressed a button on the small communications device he'd provided. All this would do would be to relay an almost inaudible beep to Ghost, but Law had faith that he'd pick up on it, and begin making his shots. At the same time, he motioned to Savage to follow him around the corner, and with almost negligent difficulty they dispatched the guards in front of the armory, Law using his sword, Savage using his knife. As this was happening, Ghost did indeed make his shots, taking out the three guards that were stationed in front of the medical bay. All incredibly clean shots, dispatching the guards with only one shot each, and not alerting anyone else of their presence.

At the same time, Mountain and Sandman were making their way into the guards barracks. Law wasn't sure how this would turn out, but he had faith that they would be able to subdue their opponents thoroughly. As Law and Savage made their way into the armory, they encountered four more SF operatives idly lounging about. Before anything could be said they'd each taken out two of their enemy, completely clearing the room. They spent several minutes looking around, wondering if there was anything worth looking into further. Law also set up his room, so that anyone entering would immediately be in a disadvantageous position. In the end, they determined that there was nothing of value besides a few weapons that they already knew everything about, and could manufacture on their own. It was around that time that the Ghost entered the armory, and shortly after he arrived Mountain and Sandman made their own entrance. They were now all positioned in the armory, nothing having gone awry as of yet.

Law looked over everything one last time, and took a moment to plan for any contingencies that may arise after their next action. It would be the point of no return, after all. In the end, he determined that everything had been accounted for, and began to place several small explosive around the room. They would be powerful enough to completely destroy everything within, and likely cause the building to become nothing more than a pile of rubble. Before the next step he asked the others if they'd set up their own explosives, namely on the well, and the outside communications tower. With confirmation on that, he was ready to step into phase two of the plan.

He made his way to the frame of the door and pointed to the largest building which was directly in the center of the compound.

"That is our next target. It's their command center. Looking at the layout of this place, it shouldn't be too difficult for us to reach it without being spotted. Savage and myself will go around these two buildings and enter through the front door. At the same time you three will wrap around the opposite side, and come in from the back. When I've reached the entrance I'll press this beeper. I will wait two seconds for a reply, then detonate all of the explosives, which I would imagine will send them into a state of disarray. At that time we kill them all. You three leave now."

Law waited several moments after the others had left to depart himself. The reason for this was because he was calculating exactly how much quicker he and Savage would reach the front entrance. Shortly, he determined that it was time for them to move out as well. With a motion to Savage, he began moving along the edges of the buildings, staying well out of sight. They did end up having to take out one random Shadow Fall agent who just happened to be walking through the alley at that specific point in time. Luckily, he was looking up at the sky as he walked along, so he had no idea his death was quickly approaching. Within the limited amount of time he had before the agent would look down and notify others, Law shunpo'd past him, removing the agents head with his blade. The rest of the trip to the entrance was uneventful.

As he stood in the doorway, Law reached down to his waist and pressed the button on his communications device that would send a beep out to the other three. Almost immediately he got a reply, at which point he held up the detonator and pressed the small red button on its face. Behind him the night lit up as if it were daytime, and his figure was heavily silhouetted.