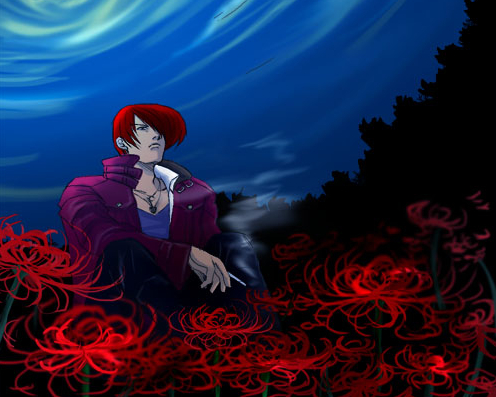 Alex
Artist: - Song: - Word Count: N/A
Jesus. Jesus Christ. This shit was just like a fuckin rollercoaster, wasn't it? And that hand of hers sure wasn't fucking helping. Did he mention that she looked super fucking cute? Because she did, she looked stupidly fucking cute like that, and he couldn't decide if he loved it or hated it. Honestly it was a little of both. Well, no, that wasn't true. He just loved it, the hate was more on him for getting so caught up in it.

Right, fuck, he was getting distracted. There was a big fuckin question on the table here, and he didn't want to just dodge it. He had to be honest with her, it'd just be shitty to not be. But did he love her? Like love love? He uh...he actually didn't know. He'd never really been in love. That thought sort of ran into him like a freight train. He'd never loved anyone. Well, his sister he guessed. But that wasn't the same, he sure as fuck didn't see Nel like a sister.

He thought about her a lot. He wanted her to be happy. He liked spending his time with her. Wasn't that what love was? He just didn't know. He'd heard it was all that shit but still way more than that too. Alexander Vaugrenard was just genuinely so confused right now that he thought his head was gonna explode. But he still needed to answer her. So he could have thought about this carefully, given her a real measured response. But nah, fuck that. He was just gonna wing this bitch, give her the real from-the-heart.

“I've uh, I've never been in love. I dunno what it really feels like. I might love you, I can't really say. But I know I like you a lot. Like, way fuckin more than I've ever liked anyone, I don't even know how to really describe it, you know? I normally just kinda fuck around and go, I don't give a fuck about people. But Jesus Christ, Nel, I don't feel any of that with you. I just wanna be around you, I hate seeing you upset like this. I just want you to be happy, you know? I dunno if I love you, and I don't wanna lie to you and say I do. But fuck if I don't care more about you than I've ever cared about someone else.”

Well...that'd been a mouthful. He meant it though, and that was important, right?

Having been focused on waiting for his response Nel didn't immediately think of her hand but given that she was slowly trying to figure out and contemplate on the workings of his feelings she removed it - not because she realised she was probably hurting them instead she used her hands to shift her position a little bit and conveniently would save him some pain.

"That sounds like a really over-complicated way to say I love you."

Cracking a small smile while trying to brighten the mood although she quickly shifted into her own silence again after the fact while mulling over what to do with this information. Why did this whole thing need to happen all at once, her friend's situation that left that feeling of envy when she thought she had gotten over it and then this happening here soon afterwards.

A shy look made it's way onto her face, knowing full well it probably wasn't fair to ask that of him in the first place - let alone ask it and only respond so simply. Hell, wasn't her entire thing here just over-complicating the entire idea of dating in the first place. It wasn't like it was as serious as marriage anyway, but there was that gap between them that she looked too closely at which made everything so much harder for her than it did for the carefree redhead and that irritated her. She wanted that boundary to fade away, to break into dust and to have what she never was allowed to have.

Alex
Artist: - Song: - Word Count: N/A
“I like you too...”
Oof. Boy oh boy, wowza. Alex had to really catch himself, otherwise he felt like he might've just had a fuckin heart attack. Man, he was a real fuckin fag, c'mon. Getting this worked up? Over a chick saying “I like you?” You're not even 12 Alex, you're like 10. Get a grip.

Or, at least, that was what Alex thought very briefly. But anything resembling that kind of deprecation of all this very rapidly turned into something that could only really be called excitement. His big dumb smile was pretty fuckin big, and pretty fuckin dumb, but he really couldn't help it at all. There was something about just that little thought that made him feel like a real champ. Actual coolest dude on the block, not even a contest.

“Hey, I told you to ask away, yeah? No need to apologize for that one. Besides, it was nice to get out there.”

It was actually true, he kinda hadn't been expecting to dump that much on her all at once. But man, he was glad he had. It'd felt good, and it seemed like she'd been cheered up by it, so really that was all that mattered. One more thing did cross his mind, though, and he actually blushed at it. But fuck you if you think he wasn't gonna say it now, after everything was already on the table.

Looking at him from a sideways glance the arrancar was surprised by his smile, a big beaming grin even. She didn't even say love, she said like. Still what really was the difference between those two words? It didn't matter to her at this point anyway. So when he reiterated his feelings to her then the response was more positive than she expected, leaning up and grabbing him before shifting to sit in his lap and look at him directly for a bit.

Saying it felt strange, even though right now she felt like it might not even be genuine but this feeling right now felt pretty real underneath all her doubts so maybe she could solve her issues by not overthinking everything and just trying. So Nelliel leaned in and hugged him, waiting to see his reaction and hoping that she wasn't making a mistake. The last thing she wanted was to see herself mess this up for herself.

Alex
Artist: - Song: - Word Count: N/A
Man oh man oh man. Somehow, even having just said it himself, he wasn't ready for it from Nel at all. It was kinda crazy to hear. But hey, crazy shit happened in the world. That was just how these things worked, yeah? And man,let him fuckin tell ya, he wouldn't have traded this little moment for the entire fuckin universe. He meant that, too, which surprised him a little bit. But he didn't mind it too much. This was an alright way to live.

Returning the green-haired arrancar's embrace with all the care that he possibly could, Alex found that there was basically nothing in his life that he could even think of that compared just to this. And it was nice, he had to say. It wasn't just like, a hug. He'd given a whole lot of those in his life. This was something a whole lot more. It meant a whole lot more. And god damn if he wasn't gonna fight for every last thing that it did mean. He loved her. He loved her. That was...oh fuck, that was such a good thought.

“I'm always here for ya Nel. Know that's a big promise, but I fuckin mean that.”

Feeling her embrace returned in a sweet one Nelliel pressed herself tightly into him, staying like this for a sweet moment that extended for a reasonable amount of time. After hearing him offer her a reassurance that he wouldn't let her down and just that was enough to put her at rest while she fell into a comfortable moment with the man.

Pulling away Nelliel leaned in and gave him a kiss, it wasn't a very long one but it was a show of appreciation for all that he did, especially what he didn't in that fear of him walking away after her mistake. So after giving a stretch and re-positioning herself so that she was laying on top of him and letting her weariness wash over her while trying to resist falling asleep on him.

Alex
Artist: - Song: - Word Count: N/A
God, Alex coulda just stayed like this forever. Holding Nelliel close like this, he of course returned her kiss, however brief it might have been, with a restrained passion. Of course he meant it, and he loved it every bit as much as any other kiss they might have shared. How long it lasted didn't matter, it was the happening itself that really just brightened his day.

“Sorry, didn't mean to wake you up with all this. Get some sleep, yeah?”

Laying here with Nel in his arms, Alex probably couldn't have been happier. He didn't need anything else besides just this embrace to know she was someone incredibly special. As he found exhaustion slowly creeping up on him as well, the excitement and adrenaline of all this talking slowly beginning to die down, the red head brought a hand carefully to Nel's hair, running his hand through it and down her back. He wasn't quite sure what it was, but he just...he liked that. Not a smooth guy at all, but he was pretty sure girls liked stuff like that. He hoped she liked it.

Cocking a small smile at her tongue in cheek comment the arrancar kept herself coiled around him and made herself comfortable in it. There was something peaceful about having arms around her and her hair being played with while she fell into the process of dozing off as slow as it was.

"Keep doing that. It feels nice."

She spoke slowly and with pauses since it was a troublesome to try and keep her thoughts straight and so they moved very slowly.