A Change in the Weather, Pt 2

A Change in the Weather, Pt 2 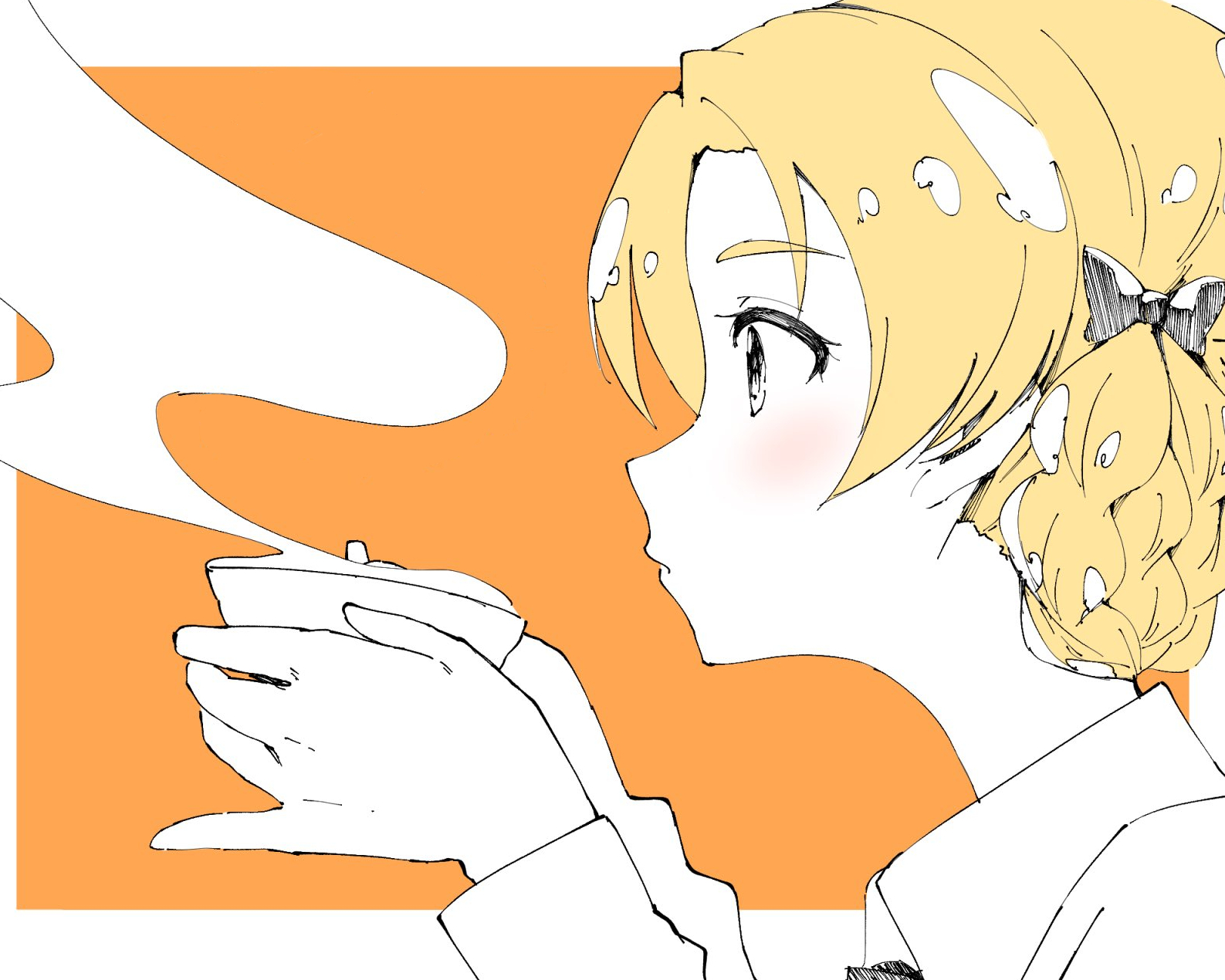 Minatumi harbour, the world's melting pot for all races and refugees. Once, it had been a key stop along her path, during her journey to reach the Vandenreich. Once, it had become a place of unstoppable fear and horror. She had seen the truth, peered behind the veil that she wondered how many truly have. She had shown her absolute worst on this land, and to a woman who had only wished to help.

Now, Sylvia wished to make amends. Dressed not in the colors of an oppressor who wished to only see death and destruction for the denizens of this harbour, she had constructed a new outfit just for this occasion. Something her own, with hints of the Quincy colors but not adhering to them. It was hardly fit for battle, but that was the point, wasn't it? To make amends, and to convey that she didn't wish to be a threat to the peace that had been established here.

She thought the vest and skirt were cute, too.

She raised her hand and knocked several times on the impossibly heavy door of the mayor's home, loudly and sternly. "Miss Auper? I need ein vord." As she waited, her hand fell silently to the water-damaged medallion attached to the hem of her vest.

"Your love is like Bad Medicine, Bad Medicine is what I need. Whooa, shake it up, just like bad medicine, there aint no doctor that can cure my disease!" Ulv was having a day in, and so in typical Ulv fashion, she was totally naked and stood on a table playing the gituar and singing some song from Mirja's time in the World, before World War Three. They had good music way back then. And then she turned to see Sylvia come into the house and get a faceful of naked Ulv's Adonis body. It was truly perfect, like she had been carved from marble rather than born. And it wasn't too far from the truth.

"Ahh, Guten Tag Schatz. Sie können gerne in Ihrer Muttersprache sprechen, wenn Sie sich damit wohler fühlen. Tasse Tee?" Ulv spoke. German seemed to be a language just like any other that she had mastered for use. Because why not? She got off the table, took off the guitar - showing off her smoothly shaved crotch as she did - and headed to the kitchen to make a drink, for herself if Sylvia didn't want one. Ulv didn't hold grudges, especially not from children.

Sylvia's face flushed as she stepped into the home, only to be met by a very... casual... very... extremely naked Ulv Auber. As if ti weren't difficult enough to keep herself calm when surrounded by the woman's energy, as she always was in the harbour, it was downright impossible at this moment. Her gold eyes widened and stared... very long and hard at the woman's seemingly chiseled form.

She had thought months alone with Ghislain was daunting. At least, he wore pants. And... And... Just how long was she going to stare, anyways?

"Ja bitte." She muttered just loudly enough to be heard, and played through the image in her mind a few more times. It was going to be difficult to forget that, if she even could. Very, very difficult.

Entering the kitchen and boiling the water with her Flame, she poured a cup for herself and then a cup for Sylvia. She was a cute one, and Ulv was going to have to play with her a bit to make up for her own nerves. It was written in the stars, after all. And who was she to denounce the stars when they told her to do something?

She had been staring again. It was difficult not to. Not that she was... attracted to her, or that Ulv wasn't... It was a complicated situation, surely, and one that she didn't have the time or mental fortitude to figure out right now. She should just keep the conversation on track, to why she had come, then she could leave and not think of this for much longer.

That is, that's what Sylvia had been thinking. In actuality, the rather large, rather nude woman had returned with kind words and an unexpected hug. The young quincy nearly jumped from her skin, and still trying her hardest to suppress the instinct to shoot to kill, there was naught to do for her activating Blut. The tell-tale light blue lines swept across her exposed face and hands, curving gently with her reishi pathways instead of forming their usual jagged patterns.

However, as was usually the case, her instincts were wrong about the larger woman's intentions. She slowly relaxed in the... comforting embrace, especially as the hand gently pet her head. It was... It was nice...

"Ich... ich bin allerdings nicht schwul..." She muttered, although her voice was a little muffled by the mounds currently wrapped around her face. "Ich bin heterosexuell... denke ich," the last bit was more quiet, and to herself. She was certainly right to question herself now, of all times, she thought.

Slowly, her Blut receded back underneath her clothes as she acquiesced to the woman's touch, and her arms rose to wrap around the redhead's midsection and return the embrace. "Du bist ... weicher als du aussiehst."

The blut was understandable, she was a combat girl without enough experience in combat to know when to not listen to your instinct. She put it away pretty quickly though, so she was learning how to deal with it. Slow learning was still learning. And on the topic of learning, she seemed very unsure of herself, sexually. Maybe Ulv should give her something to make her sure, one way or the other.

Ulv would then pull her up and plant a passionate kiss on her lips, so she had something serious to deal with, not just ifs and buts.

What had seemed a nice, comfortable moment quickly took a turn for something far... less innocent. Sylvia squeaked and blinked several times against the woman's unassailable will, and again when she found a tongue exploring the inside of her mouth that was not her own.

Instinct again took over for just a moment, as the winds picked up around the two and electricity sparked in the air. However, she never called her weapon, or pushed what was ultimately a harmless show towards anything more direct. This was... It wasn't so bad, she thought with a relaxing look back at the redhead.

Slowly, as the winds and static faded and the reishi of the room was allowed back to its natural state, the quincy's tongue chased meagerly after the invader. To say the least, her experience was quite minimal, in this matter. She'd barely broken the kiss before she tried to speak, even, "Ich habe niemals..."

And then Sylvia was released, before she could even register what the taste of that cold metal on her tongue was. Ulv took her tea and threw on a dress so black it seemed to absorb the light around it, and then returned to a seat, and in doing so, to showcase that the situation, for her, had deescalated, began to speak English rather than the German they had been.
"Not something to rush into, dear. It's a big investment, and should be with someone you love, not with someone like me who is just going to tie you to the headboard and make you beg for a release, and then make you beg some more just for the fun of it.

Should be someone who takes you with feeling in their heart, not just to see you squirm and moan and climax as hot wax drips on your body and a riding crop spanks your ass red raw, adding pain to the pleasure in a cacophony of sensuality" Ulv would then, after giving such a dramatic description of her bedroom antics, sip her tea.

Then just as suddenly as it'd began, Sylvia was let back on the floor and left to wallow in the aftermath of the... moment. She was confused. She was embarrassed. She had taken a few seconds to even realize the redhead wasn't kissing her anymore, which only made things so much worse. She didn't move from that spot again for a good while, long enough that Ulv had started talking again in English, this time.

She hadn't kissed anyone since... Well, in years. She hadn't been able to be intimate with others in that whole time. She still had the nightmares, sometimes. Now, she could still feel the warmth on her lips, and strong hands holding her.

Her attention returned to the here and now right about the time Ulv was saying something about spankings and riding crops, but the quincy had long since missed the context. If there were even context to begin with. More slowly than she usually was, she made herself a cup of tea and joined Ulv in the other room, where they could sit more comfortably. It took a few more seconds after that for the blank, contemplating look to leave her eyes.

"I..." She cleared her throat after her voice had squeaked. "I am zorry..." She might have been repeating herself at this point, but she felt it appropriate. More importantly, she still needed time to process just what had just happened. "I vant vu to know zat." She drank from her tea, and a small grin came to her lips. It was delicious, as always.

Ulv looked up at Sylvia and smiled at her as she came down and took a seat. Completely oblivious to the sexual carnage Ulv had just described as well.
"Really need to get you some eloquence lessons. But yes, unless you missed it last time you said sorry, I said there is nothing to be sorry for, if you are working towards the event not happening again. As you have said you are. So there is no forgiveness because there is nothing to forgive. Accidents happen, people either ignore them or be better than them, and you are not ignoring it. And besides, you never actually shot me"

Ulv would then create six black arms, extremely muscular things attached to her body and floating in the air.
"And I could have made a Tulpa that was not the one made out of the condensed spiritual oil of every negative thought, feeling and emotion I have ever felt towards anyone. So I am partially to blame for that happening to. When your brain is crushed by the weight of hatred, you are going to react with equal hostility to protect yourself, if nothing else. The trick is knowing when, and that was actually quite the appropriate situation"