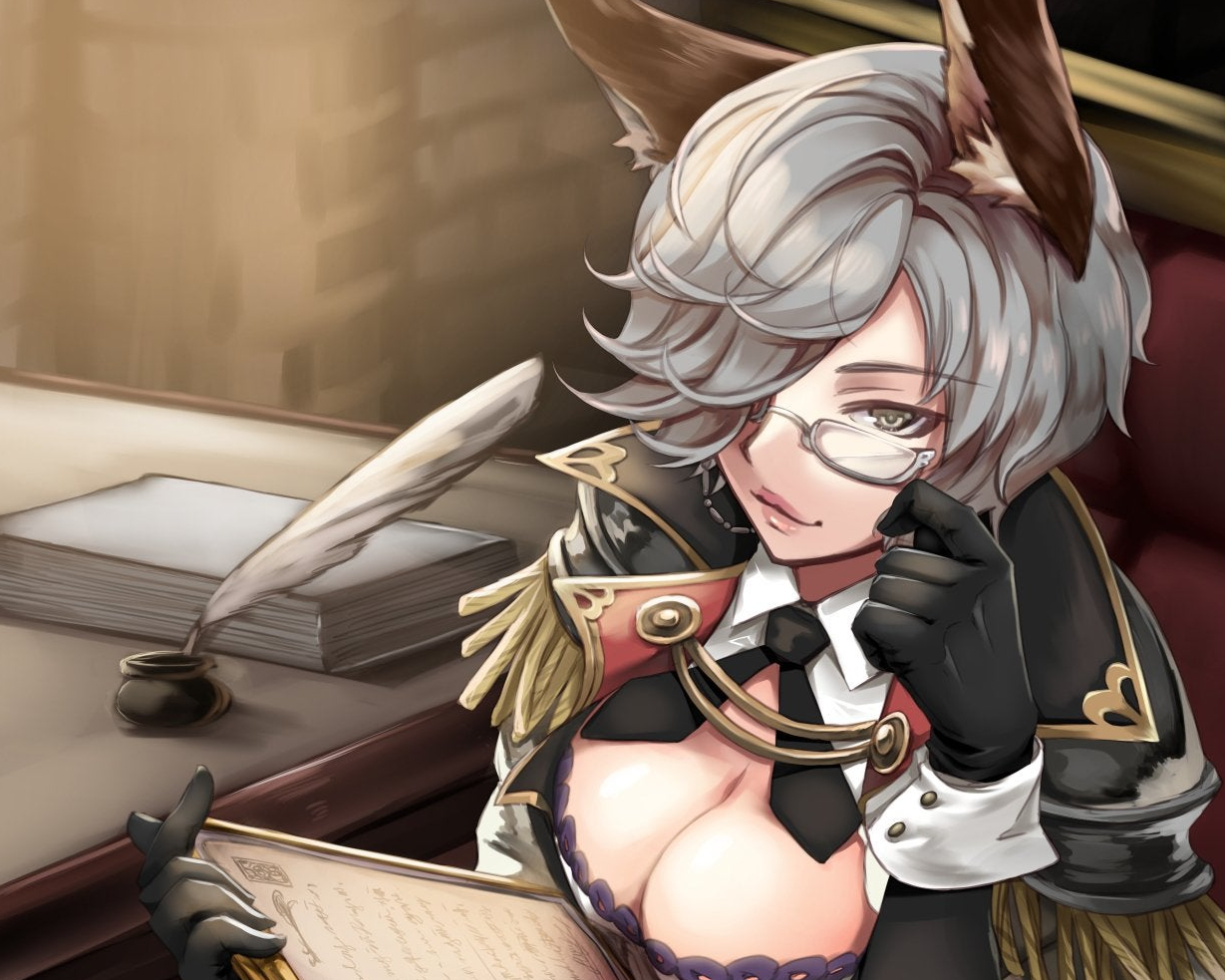 It was a simple question, but one which Ninsianna did not mind asking. In truth, it was rather cathartic for her to clean places such as this. Bringing order to a mess always calmed her, even in the most stressful of times. But, of course, she could not simply do so if she was not wanted.

"I will be sure to convey your message to the Grandmaster, Miss Armstrong. You have my word."

She did not expect to be asked if assistance was needed. Helle’s emerald eyes investigated her own room taking interest in every object that is out of place noting where it should be and why it is even thrown about in the first place. After the quick browsing, Helle found her eyes refocusing on Ninsianna silently gauging the situation. Eyes closing and one deep breath followed by a slow long exhale through her nose, Helle let herself settle on a decision that came to her more easily than she thought.

“Alright, Ms. Kishar. Since you showed desire in helping, I will not turn you down.”

Helle’s eyes reopened as she began to organize the papers on her desk. She would not direct Ninsianna allowing the woman to choose in which ways she desired to help. To reinstate the general order of the room, all about there are books here and there with no rhyme or reason except their contents pertaining to recent events such as the war going on, the genocides, demons, Shinigami, and other important news that one should study up on. Helle’s clothing is strewn around, though nothing to indecent, with her armor settled in a corner in a rather lame fashion. In all honesty, it would not have taken Helle much to tidy her workspace but help will always make things move just that more quickly.

While her tone of voice didn't change, there was still an obvious difference to Ninsianna's demeanor simply from her choice of words. Given everything else she had said was so rigid, by the books, a word such as "splendid" was rather far from that. She took to the work quite easily, and she first and foremost moved to the collection of books and the like. They were easily enough corrected, and she glanced at a few of the titles as she replaced them.

"You have kept abreast of current events, then. That is good. Ignorance of the world often leads to poor judgement. This sort of knowledge will do you well. If you would like, I can compile a report of all known major activity on Earth which has made it into our records."

Helle did not expect such a word to escape from Ninsianna’s mouth. From their conversation, Helle would not have expected such an enthusiastic word to be said in such a monotonous way, but Ninsianna has just surprised her. It was a bit humorous and showed a level of character that was missed in their earlier interaction. Though, she hid her little smirk behind a stack of papers she had picked up. Great. She’ll have to redo many of these forms. Her tears had caused the ink to run. Her attention is pulled away by Ninsianna however towards the topic of recent events.

“Mmm… Well, if you wouldn’t mind. That would help me out quite a bit. Thank you Ms. Kishar. My reading has been a bit slow… for obvious reasons.”

She couldn’t help but let out a sigh that sounded like she desired to chuckle or cry, maybe both at once. Though, Ninsianna is proving more of a help than Helle had initially thought she would. It’s somewhat comforting having such a stoic individual who’s not throwing any judgements her way and acting as a sort of pillar for Helle to reflect off and get herself put back together. Maybe the blonde could do more with this demon’s help, but she didn’t want to be a distraction from Ninsianna’s required duties.

“Hmm… While you are at it, I could use some new forms like the ones here.”

She points out the two seperate stacks: those affected by her crying and those still dry. It’s pretty obvious which ones Helle require renewed. The young Quincy prodigy couldn’t help but let a tinge of red coat her cheeks. It’s never easy having to deal with the repercussions of her emotions, especially with another around.

"I do not mind in the slightest. I am more than happy to assist in any endeavors you may require."

In only a short moment, a thick packet of papers seemed to just...coalesce on Ninsianna's clipboard. They definitely hadn't always been there, but they were not only organized neatly, but even stapled and marked with assorted highlights for Helle's convenient perusal. Removing the documents and setting them on Helle's desk, the Danava turned her attention to the stack of forms Helle had cried upon. She understood what had occurred here, but said nothing.

"Give me a few moments, Miss Armstrong."

And so she began reading through the forms carefully, cross-referencing them with those she already had on file within her mind. She was quite certain which these were, but she simply wished to be thorough. After another moment or two of reading, Ninsianna created flawless copies of the forms, replacing them on Helle's desk and throwing the tear-stained originals into the trash.

"I hope that will be sufficient."

She did not actually know Ninsianna’s ability set. She didn’t even notice at first when the papers were created right on the clipboard that Ninsianna carried around. The surprise on Helle’s face when the sudden stack was placed before her was surely a sight rarely seen. Only a few moments passed though before her face settled. With a keen eye, she watched Ninsianna take the wet papers and look them over carefully. That is when she actually witnessed the creation of the papers on her clipboard before they were placed before her on the desk.

“Well then. That is a rather nifty ability. Perfect for a secretary. If you don’t mind me asking, what exactly was that?”

Curiosity laced her visage as her head passively tilted in a childish manner expecting to learn something of value at this moment.

Coding in Template By:
https://www.platinumhearts.net/u1
[/quote]

"It is simply who I am, as Danava of Bureaucracy. It is the core of my being, and among my other talents I am capable of providing copies of any and all records I have taken."

Ninsianna wasn't especially proud of it, she just said all of that as a blanket statement of fact. If one were to call her "proud" of anything, it would certainly be...

"I am also an overseer of binding contracts. Any and all terms in such a contract are enforced unilaterally, and any infraction against the contract, or reward on its behalf, will be handled. I am unsure if it has any limitation, but at this time I have no record of one."

A Danava? She read about those, yes? She couldn’t help but rise from her seat and move over to the books searching among the many hard leather backs of the many literature references before finding the one specifically filled with knowledge of the demon race. Pulling it out and opening it to the Table of Contents, she quickly finds the information she wished to know reading quickly of the Danava race. A form of demons that form from concepts such as water, fire, etc. Bureaucracy as your core being? That explains Ninsianna’s orderly personality. Well, having a secretary who’s whole core is about order makes Helle feel a bit jealous. No doubt any personal assistant Helle finds will ever be as professional as Ninsianna.

“Well, that is rather interesting Miss Kishar.”

The added parts of this contract ability only boasted Helle’s thoughts of the demon woman. How far does that ability go? She is sure it has many applications that asking for anything specific would feel redundant and downplaying its vast use. Replacing the book, Helle moves and starts picking up clothing off the floor, specifically, the more erogenous articles such as her skirts and stockings.

“Our Liege seems to have a rather capable woman. I wonder if I could find any such as wondrous.”

"I am glad that you think so. I take pride in my abilities, given the degree of order and efficiency they allow me to operate under."

Assisting in picking up the articles of clothing all strewn about, Ninsianna made sure to fold them all neatly, even in spite of the fact that, given they were already worn, it was completely pointless to do so. It was just a matter of course for her to fold things like this, to make everything as neat as possible.

"Wondrous? Well, given the nature of Danava, I do not believe there are any other like myself. However, as I serve not only the Grandmaster, but the Vandenreich as the whole, please do not feel afraid to use my services in whatever way you feel appropriate."

“Efficiency with one’s tasks is never a bad thing even if used in concerning manners. It tells much of an individual’s passions. However, using such talents for wrongdoing will greet one with a swift end if ever stepping in my path.”

Helle seemed rather engrossed in cleaning up the little mess around, but with Ninsianna, everything flowed all too easily that the fact there even was a mess to begin with seemed quite a silly notion to her. The books are put away, her clothes in a pile waiting to be taken home and dealt with, and new papers for her to resign and send out later in the day. Excellent. With a tired sigh from emotional distraught and the duties of the day, Helle turns to Ninsianna with a small bow of her head in thanks.

“It seems all has been dealt with. I must thank you Ms. Kishar for your assistance. As much as you say you’ll assist me, I do so believe that having my own secretary would only help in the many processes within the Reich. I have learned through trial and error that not one can do all alone. Do not fear, I shall make sure to leave the more important tasks for the one I know is most capable.”

Helle couldn’t help but chuckle lightly before returning to her desk and starts looking through her new documents. It will be a simple task of rewriting all that was destroyed, but also, a boring task. It must be done however.