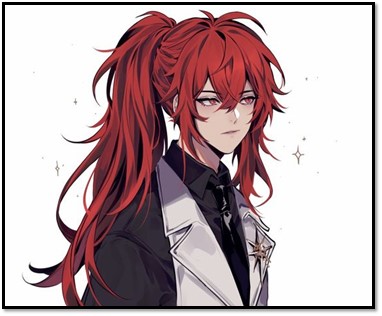 That last comment perked an eyebrow from Alastair, as she inquired about the lands outside of the City of Lights. It was certainly vast enough that one could have spent their whole life within it, especially if they suffered from a particular frailty, but it was peculiar to imagine only having existed on this island. No doubt there were many just like Shirohime, those that did not have to carry on across the continents to protect this peace that they now shared together, the thought had just never occurred to him until this moment.

"I first came here from Europe, Germany if we were being accurate. It was a colourful land, I suppose, rather quite opposite to this unending sea of white. Each city was bright and vibrant, unique in its own way. I am told America was once like that too, and perhaps it will be again in time."

His composure returned as he continued to speak, cheeks no longer flushed with red. Was it better for him to ramble about the little things and let that distract her, or would that only further her frustrations? At this point, it was a little too soon to tell.

SHIROHIME
She wasn't from here, Japanese as she was. The sickly woman thought about it, it had been a while since she had been in Europe. Before Cyrus asked her for help on his quest most certainly.

"Right.. Lots of places were once peaceful. When the world wasn't one big mess, the membrane between living and dead are burnt out though now."

Shirohime explained, making it clear she lived in the old world before the spiritual barrier had broken down. She loved those times, those memories that seemed so hard to remember and not forget. How the generations of the old world had failed, how she had failed.

ALASTAIR EISFLUCH | OFF DUTY
Alastair had read about such a time before the collapsing of the veil, where the vast majority of humans had no real comprehension of the other races and lived in blissful ignorance. But Shirohime spoke like she had lived through it, that was enough to give him pause for thought, and slowly his gaze turned to match hers more evenly.

"Was there a macabre beauty in the change though, I wonder? For all the wanton devastation it wrought, is the world heading toward a better place now those barriers have faded away?"

He didn't know the answer himself, though it was not a question that felt like it had a real answer. Or was it all a matter of perspective, where the one who implied they knew more might offer some nugget of wisdom?

Panic, turmoil. The only saving grace was that it was a steady thing, however even that had its downsides. The poles slowly shifted from people who saw spirits being crazy to the people that didn't see it being crazy. How much chaos and turmoil did it all bring to the world as the spirits made themselves at home and began to impose onto the living world now that they could do so.

"People fear that which they cannot see, Alastair. You can argue it has a peace of mind understanding how the world is but do you think it's fair for people to be born into a world where death doesn't matter? What meaning does life have when you know at the end of it, you'll just be recycled into someone else or live in another realm? Do you see the same beauty, even if it's just an illusion? The fear of that unknown of death, is what makes your seemingly temporary life and sense of self so important and meaningful."

ALASTAIR EISFLUCH | OFF DUTY
And how profound of a response it was, equally enlightening and thought-provoking in its own way. It caused him to lean back in his chair, raising a hand from his side to scratch the back of his head as he contemplated on her words. There was something brutally honest about it all, at least that was how it resonated with him, and so he felt obligated to respond in kind.

"To base the value of life on its end seems like choosing to forget the life lived in itself. I imagine much still changes when a life ends, even if it is only a means to a different beginning, so it is not something I would be inclined to embrace so brazenly."

He finished itching and sat forward again, eyes of amber hue studying his companion carefully. She was ever so intriguing, from silver hair to silvered tongue, though he knew little else about her.

"Perhaps it is the burden of the Quincy, and the finality that we cause, that feeds this illusion. Having acted as the ultimate end of many a wayward soul, am I focusing on the beauty of life to escape the futility of it?"

SHIROHIME
She bit her lip while sipping down more tasteless coffee, mulling on his words while thinking back to her life when it was all so normal and mundane. The days before she had any idea about anything spiritual about her life. It was all so blissful and peaceful, even when all her spiritual adventures were over Shirohime could go back to that simple peaceful life. Not anymore, not in these troubled times though.

"I take it you weren't born to long ago. I suppose it is hard to try and share you knowledge of a world you never knew."

Her face was pensive but she didn't mean to sound condescending. Shirohime's eyes gazed back to the window for a moment as she got distracted.

She gave him a small, almost sad, smile. Shirohime was just an old woman who sufferred because of the results of the spiritual world overflowing into the living, just a casualty forgotten by time. When she was younger she was quite bright, much brighter than she was now, but age and rot had diminished her. Worn her down until she was just the husk sitting before him and coughing up blood. A farcry from the bright young woman she was who looked forward to her future.

ALASTAIR EISFLUCH | OFF DUTY
The words stuck in Alastair's mouth as she so subtly humbled him. How old was she that he was so insignificant? Was she still human at that point? Whatever had hurt her so badly was likely layered deep in that pain and, despite his base curiosity, he did not want to pull harder on that thread.

"Twenty-three years, if that is an insignificant number then I apologise for my hubris. I can speak only of my own experiences, however naive they may be."

He turned to trace her gaze out of the window, wondering whether he had distracted her from her ailment or focused upon it more. Either way, he had enjoyed her getting deep even as she talked herself down. It had encouraged him to take a step back and reflect on his place in the world. But he had come over to give her some small comfort, not the other way around.

"Is anyone really 'good' at philosophy? Seems like people just speak their minds and then it's all in the interpretation. Maybe we think differently, but that's alright with me. We can still share a couple of coffees anytime."

SHIROHIME
She smiled at him when he shared his age, she'd have shared her's as a courtesy but she had honestly forgotten how old she was. Time dragged on for so many centuries that it became an irrelevant thing for her to hold onto, just like a lot of other aspects about herself.

"It's okay. It's you young people that should create the future, ghosts like me should've moved on by now."

Moving on, it was always on her mind. The finality of her life, the knowledge that she had damaged herself so much on her need to fix what happened that there was no future for her in any form. She might as well be struck down by a quincy, she was hardly even alive anymore as it was.

"Anytime.. Ah. That sounds nice, though I should go now."

It would be nice to talk with him again, Cyrus had become her only company since he had tracked her down. Everyone else alienated themselves from her with superstition and rumours, she wondered if he even knew she was that figure they whispered about.

Another painful smile before she pushed herself up, wincing from the effort to do so. She should be leaving now. Just going out and about made her feel so exhausted. Shirohime did stop near him though and lean down to hug him. It was the least she could do for his consideration for her.

It reminded her of when her hair was vibrant and colourful before it had become the sickly white it was now, all the stress on her body had sapped the colour from it. With her small act of appreciation done, she made her way out and disappeared into the crowd to let him continue with his break.

1, 2
Permissions in this forum:
You cannot reply to topics in this forum
Who is online?
In total there are 17 users online :: 2 Registered, 0 Hidden and 15 Guests