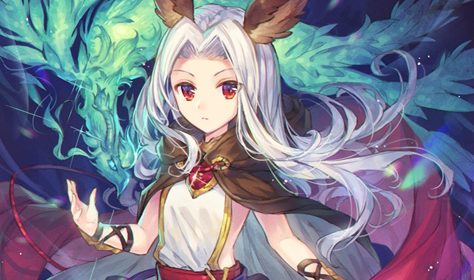 Nanna obviously reacted entirely to the way she told the story with her body and emphasising it. It sounded amazing, just imaginging some big red head guy who was a superhero on top of a building. He probably had this big dialogue spiel about telling the robot how he had picked the wrong city to terrorise and then came down for an amazing finisher!

"Wow! Do you think we can do that one day? Have you seen any big evil robots around lately that we can take on??"

Why was it so quiet. Her twitching ears just begged to hear someone call out who needed help with something. Maybe the two of them could help someone cross a street or get a cat out of a tree.... or they could fight a super big robot mecha that was evil!

VEGAS VAUGRENARD
"Of course we can! But I haven't seen any robots around here to fight, so it might be a little hard for now."

Vegas once more put most of her mental focus onto thinking of how they could really be the big heroes they obviously were ready to be. There'd been some big stuff recently, right? But that might've been too big... There had to be something!

"You hear anything going on? It's seemed like things are real quiet lately. Though um, maybe that's good? Unless we're just missin' stuff."

Inanna | Twinkle Vanilla
Vegas made a good point. There were no robots around that they could fight, in fact there wasn't a lot going on here. Well, there were a couple of big kids annoying a shop a couple of blocks away. Nanna remembered hearing about the store owner complaining of the woes. That sounded like it could be a good first job for the spice girls(?, name pending).

She finished her treat and took off with a trail of giggles, dragging Vegas along. It wasn't prestigous but it was a good entry into the whole deal she thought, and Nanna knew how to make a good deal by living with Mum so much.

"Alright. Bad guys keep on annoying this shopkeeper, let's hang around until they show up. Then Twinkle Vanilla and Sparkle Cayenne can handle it!"

Vegas naturally kept right up with her partner, listening in as they went along. Well that didn't sound good at all! She was a hero of the peace, so stuff like that was obviously no good! And besides, what kind of jerk would just terrorize a nice shop owner??

"Alright, let's do it then! We'll save the day no problem!"

Grabbing her Sparkle Pop Pendant as it hung around her neck, Vegas focused in on its power, getting ready to transform as soon as they got to their spot. After all, a superhero needed to keep their secret identity!

Time flied when you had bad guys to stop. Nanna pulled Vegas into a little hiding spot. It was some bushes across the road from the store she was talking about. School had finished since Vegas was here so Nanna was sure they'd show up here soon. Just a matter of waiting.

She saw that the sparkle pop pendant was out and grabbed her own little totem to evoke the power of Twinkle Vanilla. She was just so excited, this was going to be so cool! Nanna couldn't stop wiggling with excitement from behind Vegas. The smaller girl had Vegas' back, covered from any ambush.

"Hey, hey... Hey. It's those kids, see the three boys and that girl. Yeah, that guy's the leader and those are his cronies. I think the girl is also a cronie but she doesn't seem dangerous. The big guy and her just kiss occasionally."

Nanna had done her recon.

Spinning on her toes with impressive grace, Vegas held one hand to the sky, her attire changing into a rich pink light as the magical girl transformation began. Her immense sword materialized in her outstretched hand, and there were several energetic "pop" sorts of sounds as her clothes were more completely replaced by the extravagant attire of Sparkle Cayenne. Her posture was confident, helped tremendously by her increased height, and she waited for Inanna to transform as well before she engaged the evildoers.

After all, you always waited for your friend to transform too.

Wham and bam. It's like she was covered in glitter while she grew, her silhouette the only thing able to be made out before she made a cool striking pose and the exciting sparks fizzled down to show off her new form. Twinkle Vanilla on the job!

Ah, she couldn't contain her excitement. It was all so razzle dazzle for her, she just wanted to jump out right now and catch them off guard with her splendour but she needed her partner so they could do their cool intro and poses. That's what magical girls do after all.

SPARKLE CAYENNE
The moment that Inanna--er, that Twinkle Vanilla had finished her transformation, Vegas leapt from their hiding place and struck her pose, pointing her sword toward the evildoers to freeze them right in their tracks!

"Stop right there! There's no evil on our watch!"

She knew Ina- Twinkle Vanilla would be right behind her, given how many times they'd practiced this already. It was honestly super duper easy for them by now, even if actually doing it in a really for real crime stopping was a little bit more daunting. Confidently, she made sure to say her line, that way her partner could enter right on cue.

"To protect the world from devastation!"

Twinkle Vanilla (Actually Inanna!)
"To protect the innocent with truth and love!"

Twinkle Vanilla was right behind her, striking a pose from behind her and cheekily peeking out from beside Sparkle Cayenne. The spunky not so little anymore magical girl gave a wink to the no good crooks and a peace sign. There was no reservations here, she was so excitedly ready that it didn't matter that if she might've had reservations or nervousness. She didn't really care, except that the bad guys knew how much trouble they were in with the two of them here.

"You guys picked the wrong store to terrorise, prepare for trouble and make it double!"

She might've stolen the part that Sparkle Cayenne was meant to say in the heat of the moment, oopsie...

SPARKLE CAYENNE
Well, having her part stolen did throw Vegas off a little bit, but it wasn't nearly for long enough that she couldn't just catch herself and go right back into the thick of things. Giving the wrongdoers her most menacing glare (which was actually relatively menacing given her age), Vegas spoke with surprising authority in her voice, helped by the fact that it had matured a bit with her appearance. She mostly just tried to copy Aunt Abalia when she was doing these parts.

"Apologize right away, or be ready to face justice! And promise you'll never do this again!"

That part wasn't exactly as heroic as the speech, but they'd had time to practice the speech before. All the specific stuff, a little bit less so.