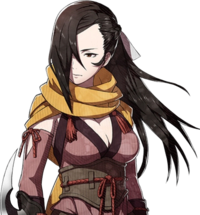 Saera was... well in a word she was bored. She had been assigned to perform a fairly routine stint in the United States, somewhere in Nevada if she remembered correctly. Apparently some kind of conflict had wiped out a city some time ago, and the Gotei was still a bit leery of the general area because of it, not leery enough to give her details though, oh no. Why would they? The whole damn country was stabilized by the Vandenreich, so despite wanting to keep a presence it wasn't like they expected much combat. Regardless, they wanted a presence, so here Saera was, in, well she wasn't sure what city she was in, and she didn't particularly care, she wasn't much of one for cities in the first place, and her somewhat sour mood certainly wasn't helping her attitude about it.

Saera stumbled a bit as she briefly lost concentration on her shunpo as she walked along the street, drawing the gaze of several people before they decided to ignore her and carry on. Muttering to herself as she re-gained her focus on keeping her feet just slightly above the ground she continued on. Just because she was on a slow circuit didn't mean she wasn't going to take the opportunity to work on her abilities, especially given her...difficulties with Shunpo.

As she continued down the street, passing several upscale restaurants as she was in the 'ritzier' part of town, she kept an eye out for anything unusual, boring job and frustrations with her own abilities aside she still had a job and she damn well wasn't about to shirk it.
__________________
Saera's App

It took perhaps ten minutes to notice the first one, but once Saera did, it seemed to grow easier and easier; after a bit of time, it seemed almost concerning how prevalent they were, and how everyone simply seemed to accept them as if they were fixtures of the area. White, bobbing flames about the size of a person's paired fists could be spotted hovering atop buildings, nesting in lightpoles in place of lightbulbs, and all around the area. None of them seemed to give off any appreciable level of spirit energy, pinging as something so amazingly tiny that they never would've been worth note if not for their sheer number.

If not for the fact that each one gave off the same wavelength of spiritual energy as a hollow. A miniscule hollow, the sort that could've survived in Hueco Mundo just from the ambient energy...but a hollow nonetheless, and without a single hole or mask to be seen. It looked more like, if one had to make up a morbid comparison...the droppings of some hollow creature that had passed through this area at some point.

It was just slightly strange enough to qualify as something that would warrant reporting on their next trip back to the Gotei, under normal circumstances. These circumstances were hardly abnormal, likely because a recruit such as Saera simply wouldn't have had the training necessary, or the context, to understand just how abnormal they were. To know that, at this very moment, a gross of eyes and ears were watching her as she traversed the streets of this city, going on her rounds. The panopticon was working in full force for the time being, and there was someone sitting in the surveillance station, ever-so-curiously waiting to see what this girl would do if she finally figured out the truth...

As she continued to walk along Saera began to notice something strange. At first it was an almost unconcious tensing of her muscles, a rise in nervous energy, almost as if she'd spotted an enemy she knew she was going to have to fight, but as far as she could see or sense there was nothing nearby.

Saera came to a sudden stop, and as the press of people flowed around her she began to whip her head back and forth, attempting to look everywhere at once with narrowed eyes. It was subtle, so much so that she could barely sense anything, but she could detect the tell-tale spiritual pressure of hollows. The problem was that she couldn't pinpoint the presence, it was almost as if she was in a light fog of hollow reiatsu. No, that wasn't quite right, Saera's eyes closed completely as she focused on her spiritual senses, conciously shutting out all of her other senses, admittedly with some difficulty.

Saera opened her eyes, pausing slightly as the rest of the physical world rushed back into her concious perceptions, and found herself staring straight at a streetlight. A streetlight that was decidedly not powered by electricity. In place of a lamp, and in place of lights all down the street in other lamps and on buildings, was a tiny, burning, floating ball of spiritual residue providing light, and none of the humans around seemed to notice, or at least care, about the little balls of hollow power.

Frowning Saera stepped up closer to one of the lights, now hovering above the crowd, to get a better look. She brought her face close to the little flame, but refrained from touching it.

After looking at it for a solid minute from different angles she sighed and whispered to herself, "Now, what in the world are these things? Ah ain't never seen the like."

Saera turned away from her scrutiny and blinked, suddenly noticing that she'd drawn a bit of a crowd as people watched the strange shinigami suddenly obsess over their street lights. Shrugging, Saera stepped back down to ground level, though she made sure to keep her shunpo up and stay just above the concrete. Looking around Saera found someone who wasn't suddenly hurrying away to something they needed to do now that she wasn't up in the air and walked up to them.

"Hey, ya know what those little balls o' fire are?"

The man gave her a strange look before responding, "The lights. Obviously."

Saera scoffed, "Obviously he says. Ah mean do ya know what they're made of? They're puttin' off a mite o' hollow reiatsu an' Ah wanna be sure they ain't somethin' dangerous."

The man rolled his eyes, "They're lights, they don't hurt anyone. Except maybe stupid soul reapers who stare at them too long and run into a pole or something."

With that the man walked off, muttering about 'Shinigami hicks', leaving Saera insulted, but at least a bit more sure that she hadn't stumbled on some kind of major problem.

With a roll of her own eyes, and a one fingered salute at the back of the man as he disappeared into the crowd, Saera began to walk off, continuing her patrol. She'd include this in her report, but beyond that...