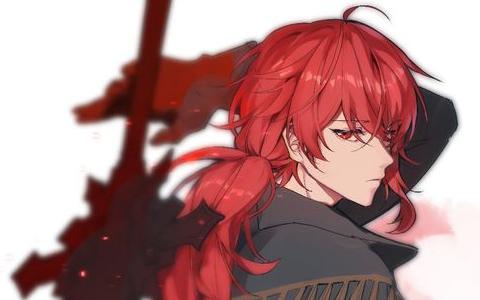 ALASTAIR EISFLUCH | On Vacation
There was a pause as Alastair studied Caly's reaction to his own words. It was almost as if she could sense how he felt before he even vocalised it - or even when he did not. Or perhaps she was simply overemotional and he was trying to rationalise something that already made sense. The mention of his potential did draw something close to a reaction from him though, the comment being somewhere between patronising and comforting - though it was clearly intended to be the latter. It was all well and good to be told that he had been brave, so had so many of his comrades and they had not been so lucky.

"Potential is only useful if you can convert it, turn it into something worth all the effort and the pain it took to get there. I risked all of mine in Jefferson, was it really bravery or stupidity?"

He watched her begin to walk ahead, happy to let her take more of a lead as the trail quickly became more of a climb, the cliffside bringing with it a view of the valley below that was enough to draw a whistle from his lips. It was certainly true that he enjoyed nature, but this was something else. Still, that was not why she had walked ahead, and soon she laid some feeling upon him.

Something that gave some insight into her past. But she was only three years old? Were demon years different to human years, or was that in human years? The thought perplexed him as he recalled that strange child from Jefferson who was actually the soul of an old man, was this the opposite of that? So many questions and yet he did not know enough to answer himself and felt awkward to even ask whilst Caly was dealing with all the rest.

"That is an awful lot to put on someone. There is certainly more there than I could ever hope to understand, packed into a few short sentences."

He spoke freely because lying to her or being evasive would do no good, he was just a human trying to process the inner workings of demonic society and how it had led Caly to where she was.

"But the world will always judge you harshly, every bad decision amplified beyond compare and the good buried down in the dirt, because of the name you bear. It would have been easy to turn away, to disappear, rather than do anything remotely good. But you did not do so, something sparked within you and attempted to make a difference, so hold on to that spark with all you hold dear."

Her smile receded with Alastair's response, her movements appearing somewhat stiffened as she swallowed all of those ugly feelings that bubbled in response. She couldn't be getting all sick and disgusting during this outing, not right now, not this second...

Though a second bubbling occurred with Alastair's next statement - that she had put quite a lot on him with what she said. Was that not right? Should she have not said any of that? She was just trying to tell him her perspective, to help him understand her better. Did she just do something to more push him away, did she just dehumanize herself rather than the opposite?

She only seemed a bit rattled on the surface, her face otherwise neutral as he spoke of the world's perspective, and her own actions amidst it. She'd take in a gentle deep breath, before sitting down, legs hanging off the cliff's edge, and looking across the distance. She didn't want to walk any further for right now, she just wanted to rest...

"..Look.." She'd speak softly, motioning for him to also sit if desired, but it was alright if he didn't want to, "...I didn't mean to be too heavy, or inappropriate, or anything. I was meaning for this to be something fun, something we can use to get to know each other a little better."

She seemed hesitant to say the next line, but went on, "..And maybe... Become friends.."

"But... If i'm only making you uncomfortable and wary, it's okay, I understand if you want to leave,"
Her fists clenched, her eyes actively holding back tears, "I'm not really good at this kind of stuff, okay? So if I messed up, just... Tell me."

ALASTAIR EISFLUCH | On Vacation
There was something up with her, that much was apparent, as she took a seat on the cliffside. He had already deduced that there was plenty up with her, so this was hardly new information, but that did not exactly dehumanise her in his eyes. Everyone carried their own baggage, some more than most, and he was no more of an exception than she was.

Sitting down beside Caly, though a little back from the edge so that his feet did not dangle as hers did. He considered her words for a moment with his head cocked to one side, red hair now blowing in the breeze from their ascent.

"Though I cannot say it is always a fun thing to discuss, there is an honesty to telling one's story the does often predicate a friendship."

He did not smile, but nor did he frown, instead he just sat there enjoying the beauty of the scenery before them.

"Friendship is not exactly something I was expecting. Even after all you did to get me out here, I imagined there was a greater purpose but I did not yet know it. Still, I appreciate the gesture. Not every day that something like this comes about, so forgive me for being such a poor guest."

His concern was genuine, he did not bear her any ill will after all. She had saved his life in Jefferson, it was the least he could do to hear her out and perhaps she if they parted ways a little differently to how they had arrived.