Now and Then We Change, Here and There We Lose. [Ichigo, Nelliel] 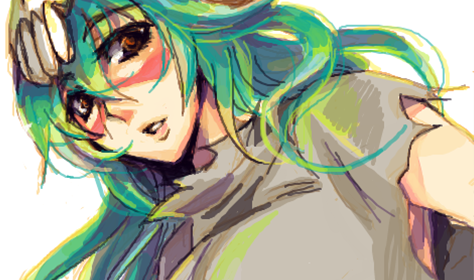 Nelliel Tu Odelschwanck
It was immensely frustrating to see him in such a state, that and depressing. She bit her lip at trying to think how to navigate the scenario before her. A couple of lingering moments before she tried to respond to anything.

She stated and she fully ready to hear more arguments about how there was nothing left to go back to. To hear him argue about his losses and preach it at her who had been in the limbo of being an arrancar for far longer and with a lot longer history.

KUROSAKI ICHIGO
"Yeah. Maybe I could've. But it didn't turn out that way, I guess. There's not much to be done about it now. I'm here. You're here. I don't even remember what happened that day."

Ichigo went from sitting to laying down, staring blankly up at the empty sky, his while demeanor one of empty defeatism rather than being relaxed. His attention was still on Nelliel, of course, but his body language hardly suggested that. This just made talking a little less convenient.

"I'm sure things only got worse, anyway. I'd have let them down, too, so maybe it's better this way. I think being dead would be better than them knowing I turned out this way, if you're any indication."

But there was one thing Ichigo couldn't help but point out to her. It wasn't a big deal or anything. After all, nothing was.

"I didn't choose this. It just happened."

Nelliel Tu Odelschwanck
To tell him to fight would be a crime and a betrayal of her own values, those core beliefs of pacifism and trying to see the good in people through all the cynical attributes that she had developed. They were still there but the past hope she had for hollows had dissolved and greater pictures had been put to rest in favour of her own attempt to have happiness.

"Ichigo. You can choose not to fight after defeat, but you shouldn't choose to live in your defeat."

KUROSAKI ICHIGO
"Oh yeah? And what else should I live for? All those things I had left when the dust settled? All my friends, wherever you were?"

The tone of the response was more pointed than outright accusatory, a simple observation that Ichigo didn't particularly see any real reasonable response to. After all, if he'd had anything left to live for, he probably wouldn't be here right now.

"I got up after a lot of things. But that? There was no getting up from that."

Nelliel Tu Odelschwanck
Now that was some gall but his current state did give him the kind of patience she'd give to someone struggling, it could be worse frankly. He could be a ravaging animal who had sought solace in meaningless violence rather than antipathy.

"To live is to suffer, Ichigo. I haven't seen you in forever but you have no right to sit here in the slums and patronise me."

Her hand took ahold of her hair and scratched her head, it was a headache both of the heavy heart she had at all this and just everything else. How was she supposed to help him?

"Where was I? Where was I, when you needed me? You weren't the only one that lost people during that Ichigo, I lost my own family. The only difference is that rather than sitting here in this wasteland, sulking I am still looking. I am still living. I have people I need to take care of, a husband and adopted daughter, her friend - and my missing family which is why I trawl through this wasteland presently. What about your family, Ichigo? Did you run away from them or did you lose them after you failed?"

That was all he could say on the matter of his family. He didn't know where they went. He didn't have the slightest idea, actually. But they hadn't been there, he knew that much. Nobody had been.

"All I know is they weren't there at the end. Maybe I ran. Maybe I lost them. I don't remember anything about that day."

Of course, that wasn't because he couldn't. He simply chose not to, and he gripped his own fist tightly as his mind drifted even for the briefest of moments back to that day. He'd decided he would never remember it, and the very thought of seeing that orange hair for the last time was enough to make his whole being ache.

Nelliel Tu Odelschwanck
"Then get up and find out rather than just sitting here with your tail between your legs, Ichigo."

It was a little bit more tough than she intended, more commanding than her normal level of compassion but not devoid. The fact she was telling him with such authority was the only because she did care. Nel did understand that sometimes you had to be a little tough on someone to try and get the point across, unfortunately that stupid man from all those centuries ago who's name now escaped her never learned but it still frustrated her to remember the persistent way he'd challenge her.

A buffoon he was. Ichigo wasn't like that though, at least the Ichigo that she knew before.

KUROSAKI ICHIGO
As one hand tightened into a fist, Ichigo turned his gaze to the woman that he had once considered a friend. Once? No, that didn't seem right. Surely she was still a friend, but it didn't feel that way at the moment. She hadn't been there. Then again, neither had he. Maybe they'd just failed each other.

But in spite of that resigned response, Ichigo didn't so much as move a muscle. Even he didn't know why. Maybe he just didn't want to know the answer to the question of what happened. Maybe it was the thought that he would never know. Or--

"What have I missed out there?"

Maybe that was a question he didn't want the answer to.

She crossed her arms in frustration, he wasn't making this easy. It was hard enough to try and remain composed herself but his apathetic attitude towards everything ran her up the wall or maybe it was just seeing him as a miserable wreck like this that stirred her up so much, it was hard to tell what it was exactly but she presumed it was a mix of all these things.

"A lot of needless violence, wars and misery. Things have settled now though... For however long it lasts that is. It's a very different world out there, Ichigo."

Very different from the one she knew.

KUROSAKI ICHIGO
"Doesn't sound like much has changed at all, actually."

A humorless laugh escaped his lips, knowing fully well that he didn't want anything to do with an unchanged world like that. But, even so, he couldn't help but feel bad about it. He knew how callous it was, of course, but that wasn't necessarily why.

He just knew how much she would have hated to hear that.

"I'd ask to meet your family, but I doubt that's something you'd trust me with right now. I don't blame you."

There was still something about the conversation that, in spite of everything that had consumed him, made Ichigo feel like he ought to get up. Like he ought to go...somewhere else. Whether that was simply to avoid this conversation, or to make good on what she was saying, he really didn't know. He hadn't done much of anything in a long while.