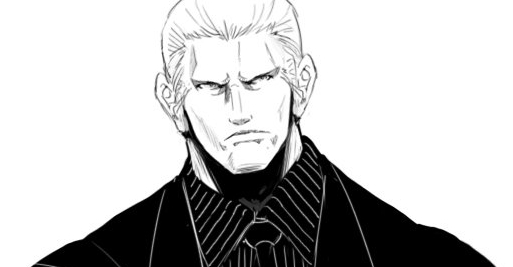 ERCHANHARDT BURGSTALLER | IMPERATOR GERMANORUM
In all likelihood, Erchanhardt knew that it was a potential political nightmare for him to be traveling to the City of Lights. His claim to the throne had been backed by Vastime, after all, and he knew that this was hardly a place friendly to them. But the reality of the matter was that Vastime was slowly becoming unstable without its king there to lead it, and with its queen suddenly more and more distant by the day. Perhaps the circumstances had been unavoidable, but that did not suddenly change that he needed to face the reality of the situation.

If the Vandenreich chose to move, they would not be opposed by anyone who could genuinely stop them. For the good of his own people, Erchanhardt would not stand in their way. He knew of their aims, their desire to protect the peace on Earth and to cut off travel between the realms. The former was a matter with which he agreed, but the latter was one toward which he was far more ambivalent. He was old, after all, and he remembered those days when things had been far simpler. Yet some of those he held most dear in his heart were not from this world. Could he, in good faith, deny others the opportunity for such happiness?

Well, there would be time for those musings later.

Despite his remarkable title, and his statuesque presence, Erchanhardt had arrived with little fanfare. He had no entourage, and he wore no kingly garb, merely a crisp suit with only his imperial crest on the lapel to mark his position. He may as well have simply been a quite large man as he was escorted to the director's office, and he knocked on the door firmly, yet with the respect due to one of her station. After all, he had no authority here.

Was that the correct way to address him. She’s not entirely sure. Despite her status, she’s not entirely used to entertaining royalty, especially one from her country. Her German heritage is something she has never had the need to think about, but when faced with a fellow German, it is hard to not think about her bloodline. Still, his reasoning for being here must be something more important than blood. Why her of all people though? Did Cyrus prove too occupied? Maybe it was her damned superior who put her in this situation in the first place.

She was entirely unprepared for him when the news had reached her. It was a miracle she was capable of putting herself together before he arrived. Papers had been scattered, books misplaced, her outfit unkempt. She even had to use a bit of her power to ensure she got things tidied up. Hopefully he finds nothing out of order. She even made sure to put on her best professional smile as he entered.

“Welcome to The City of Lights, Mr. Burgstaller. I hope you have found everything to your liking.”

ERCHANHARDT BURGSTALLER | IMPERATOR GERMANORUM
Of course, Erchanhardt wasn't one to particularly judge another based on something such as their office. His own was immaculate, but he knew that few had the same mentality as he did toward these things. No, his attention was only on the Director of the Sternritter herself, considering it was with her that he had business this day.

"The city is beautiful, certainly. I would certainly say as much to any who asked me of where they ought to travel. But I hope you do not mind if I skip over the typical pleasantries of a royal visitation. I do not wish to waste your time, as I have no doubt that your position is one with far better things to do than hosting diplomatic meetings."

Erchanhardt had no illusions as to his importance in the grand scheme of things. It would have been foolish of him to simply act as though his role as Emperor of a single nation granted him some tremendous right over others. Then again, perhaps that was not something other leaders tended to take into consideration. No matter.

"I have come to discuss the activity of the Sternritter within my borders, Director Armstrong. It is no secret that my nation has maintained a strong relationship with Vastime since the war, and I thank you for not simply treating me as an enemy. But I suspect you know as well as I that Vastime has become unstable in recent times, and their government, without their king, is not one I wish to associate with. I would like to formally open the Holy Roman Empire's borders to your people, though you understand the delicate political position I am put in if I offer any assistance beyond that."