Well, that was definitely a higher swing up than she anticipated. His pretty talk didn't do much in the way of swaying or astounding her, but she didn't get the vibe that the guy was trying to trick or entrance her; he seemed like he actually believed in what he was talking about. While Liltotto had her own cautious consideration of the higher, the better, only stunted by that same sense of caution - that if she actually took that step, she'd be seen and soon after rendered incapable of continuing... Period. A more agonizing fate than running and preserving herself was definitely of being unable to further experience life, or the world, regardless of how great or miserable it was to do so.

To her, that was a far worse suffering any amount of hunger could give her.

The mere idea of having so much power, to move the cycle itself, to reshape the world, filled her with sensations of caution and intrigue. The hesitant part of her mind, formed from the war, the genocide, the hiding, wished to cease entertaining this, to turn around and go home, to cease communicating with this man all together. But even though his very attitude made her skin crawl, the curious part...

"Alright," She'd place a hand on her hip, "Say I do help you, however that'd work. What do you plan on doing to achieve your goal, and once you do, what kind of world are you intending for? Cause if it's some envisioned utopia deal, I've got bad news and too much literature saying that's impossible to have."

AHURA MAZDA
"I intend to replace the very being from which we were formed. The Soul King is protected by the Gotei, remaining locked away, but what good is he for the sake of any realms? The Gotei stands in our way, and I fully intend to remove them as an obstacle. Whether that is by erasure or simple submission is irrelevant."

A claim so brazen might have typically seemed outright comedic, but true to his own words, it seemed the intensity of the sun itself was behind Mazda's gaze and his words as he spoke of that aim. Of course, there were others in the way of this path, but none was more pertinent than the Gotei.

"While visions of a flawless society where all live at their best are of course aimless, I think referring to the writings of others is equally fruitless. Others do not exist as we do, and cannot understand the scope of this situation. The outcome of this is simply a world which maintains the natural order. You are certainly old enough to remember a time when things were far simpler, yes? When the realms were not so muddled, when a divide between them was ironclad? We will maintain such a thing by force. Those who disturb that tranquility will know only the harsh reality that their desires are nothing more than corrupting influence upon the world, and they will be removed without hesitation."

His aims were grand, perhaps too grand to even be called a singular goal. There was a vision in Mazda's mind that could never be fully conveyed through mere speech, one that, perhaps, ought not ever occur. But to him, it was all crystal clear.

"A simpler world, where the good are rewarded, where the peace is enforced, and where impurity is burned away." 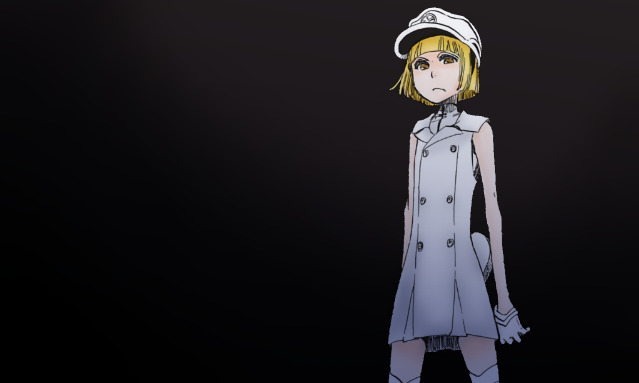 Well, that definitely was one way to get her attention. Her typically flat expression changing to what looked to be mild surprise when the man divulged his intent - it sure as hell was absolutely asinine, perhaps even egotistical, but it definitely was no frivolous or baseless dream for perfection. How her supposed origins and "place" made her feel aside, she definitely held the same sentiment about the Gotei, though he likely lacked the other complexities behind her own personal thoughts and feelings of them.

"I'm listening." She'd cross her arms, heeding what more he had to say. Though she still believed his ideas to be a hard reach, absolutely a giant mess of a process to get there, she could understand where he was coming from. She did remember the days where things weren't such a mess, in the past, and the further distant. She believed the Gotei and the Shinigami as a whole meddled far too much in matters that shouldn't be their concern, even hypocritical in some ways - the Quincy were slaughtered for the slaying of hollows upsetting the balance despite the massive threat they posed to them, yet they decided they could traipse about in the Living World, forsaking their supposed sacred duty, and even govern parts of it? She was mad as she was fearful of being discovered and disposed of as they grew more and more involved.

"...I get you're determined to see this through, but I have a concern," A solemn yet strangely serious expression showed on her youthful features, "You wanna tear the Gotei down a few pegs, I can get behind that. But in this world you want to make, with that stricter enforcement... Would there be a way for others, aside from Shinigami, to safely kill Hollows?"

She spoke steadily and calmly, keeping that well of feeling at bay, "Because... If that right remains exclusive to a single people, we'd just be doing exactly what they were. Others should have the ability to defend themselves from wild Hollows without disrupting the balance, or needing to be exterminated because of it."

Her eyes closed, her head shaking, "I couldn't go along with inadvertently repeating that tragedy. But the Gotei..." Her fists tightened, her gaze low as she'd let out a soft, pained laugh as she felt a brief surge of anger, "..Those complacent dickheads have had it coming for too long."

The small blonde's gaze would return to his. She had a feeling she perhaps was making a deal with the devil, but if it meant an end to this garbage...

AHURA MAZDA
"You are a bright one indeed, Liltotto. The Vandenreich, at present, has found itself in a most uneasy alliance with the Iramasha Union. They are a capricious, untrustworthy people, ones who have been quite conspicuously absent from the world's affairs even in spite of all the power that they hold."

Naturally, Mazda was going somewhere with this, and the intensity in both his voice and his gaze only grew with each word that he spoke.

"They carry the ability to purify those souls which have become too corrupted. To maintain the balance without necessitating so much as a single shinigami. It is true that they have quite clearly failed in this duty, but we need not rely on them. If we simply take their power, give it to those who will use it as it ought to be used, then this is hardly a concern."

What would the Iramasha think of that? Well, Mazda imagined that they would be quite opposed to it. But he also did not care one single iota about the opinions of such meaningless, idle beings. They were of no consequence to him, or to the world that he was building.

"Simply one more obstacle that we will overcome together."

Liltotto's expression surely did change to that of silent confusion with a hint of mild irritation when the man brought up a point that she didn't openly consider - The Iramasha DID also possess some governance over the cycle, and although to her currently admittedly limited knowledge of them, they experienced quite a bit of loss in recent time... But both quite a while ago, and no excuse to be quiet during a time like this. Where the fuck were they?

She honest to god could not put into words how she felt about any of these groups and people who held themselves up yet didn't deliver on it whatsoever, beyond feeling ill to her stomach, but she sure as fuck didn't like it. With a low exhale, she'd nod his way,

"Yeah. Sounds good," That human feeling of bitterness churned within her, serving as both a reminder of her self and a sense of motivation for what's to come. Even if this man gave her an odd vibe, barring their supposed connection, she felt that he was not wrong in this circumstance, even if it was stated in that high and mighty tone she wasn't terribly favorable towards, "If it means giving it to people who actually act like they give a shit, then yeah. We shouldn't have to rely on these distant fucks for something so basic."

Her gaze would lower, "Frankly... It makes me sick that so much hinges on those who don't actually seem to care."