KUROSAKI ICHIGO
Ichigo knew, broadly speaking, where Lilynette would be in Hueco Mundo, and he'd simply walked along the desert sands with Ignacio in toe in that general direction. He wouldn't be going anywhere without her, naturally, though he fully expected that he'd find her soon enough.

He didn't actually know whether she was especially close herself, but he'd spotted one of her wolves close by. That was enough to know that she was keeping an eye on things, and by extension, that she'd hear his comment to her. and there wasn't any reason to keep messing around here in the desert if they could get something done. Glancing over to Ignacio, he made only a brief remark, seeming as drained as ever.

Once Ichigo had called out the nearby wolf made from flame-like reishi paused and turned it's head toward the pair, it's head canting to the side for a moment before it let out a little 'Boof' of acknowledgement, it's body dispersing on the spot. And as Ichigo had anticipated it did take a few seconds before there was a dull CRACKLE of static as several wolves popped into view, before finally Lilynette herself crackled into view without even the slightest of hints from the horizon. IF there was ONE thing Lilynette could do, it was haul ass over long distances with her Sonidos as effortlessly as breathing.

"Sup Lil Ichigbro? Who might this be?" She asked chipperly, nodding to the newest addition to their little group and grinning wolfishly. "Name's Lilynette! Nice to meetcha, Miss!" She transitioned quite fluidly from greeting Ichigo to then addressing and introducing herself to the newest member of the pack.
Her wolves, in the meantime promptly began move in to sniff from a reasonable distance, clearly intent on inspecting the stranger, one or two of them making their way over to ichigo to similarly sniff him for any sign of familiar scents if Ichigo had run into any of the arrancar Lilynette knew from the past. Depending on how recently he may or may not have run into them. 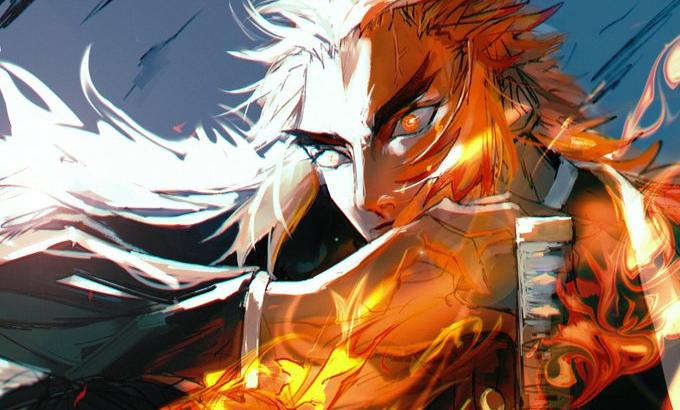 Ignacio Vega
Flaming eyes flicked to Ichigo for a moment as he addressed him. Ignacio thought he had seen something out there in the sands just before his companion had spoken, but it was hardly something to be concerned about. This third member of their party was certainly going to be something, either good or bad, and the materialisation of several of these wolf entities did give him pause for thought. A hand rested on the hilt of his sword, ready to draw it should they turn hostile, but noted that Ichigo was making no effort to prepare for combat.

"I am Ignacio Vega, of the Flaming Rings."

His introduction was as formal as his attitude belied, turning to face Lilynette and offering a polite nod of the head. Making sure to keep track of as many of the encircling wolves as he could without letting her leave his sight. Those same fiery eyes were studying her now, trying to gauge the newcomer and finding her to be satisfactory. If anything, at least she wouldn't slow them down.

KUROSAKI ICHIGO
Ichigo didn't even seem to register the nickname that Lilynette had deigned to give him, and while he did hear it, he had no particular thoughts on the matter. It was just a name, and he didn't really care if she said it right or not.

"He's got what we're looking for. The first Ring of the Dead. We're heading to Earth to look for more."

Taking a seat in the desert sands, Ichigo made some degree of an effort not to simply lay down and stare up at the sky. After all, they wouldn't be staying here long. It would be more work to get back up later. He knew perfectly well that he hadn't elaborated much at all about any of that, but it was a bit much to expect from him, really.

"I assume you're coming with us. It'll be somewhere out of the way."

Lilynette paused, her attention drifting to Ignacio for a moment as those Wolves continued to appear around them, soon no less than a good ten of the creatures were milling about as Lilynette studied Ignacio for a moment. She was a good ways taller than she'd been in the past and there was no shortage of mirth she gained from no longer having to crane her head to look at some taller individuals. She gave a respectful nod back before breaking out into a grin and giving the man a thumbs up. "No need fer all the formality! You're in the gang now!" She assured him before almost sputtering when Ichigo outright told her he HAD one of the things that they'd been looking for. "Holy shit, for real? That's awesome! Hey you got it on ya right now?" She asked, a couple of the wolves moving in a bit closer and sniffing in the man's direction. Hoping to get the strange item's scent. Now that they HAD one of the things it would make it a helluva lot easier to look for em!

As Ichigo plopped onto the Sand, a couple of the wolves sat down right beside him as if in solidarity. Lilynette rubbing her chin a little. "Huh.... World of the Living eh? been a while since I was there for too long..." She thought back to that wimpy Shinigami she'd met the last time she HAD. Weird guy, did seem good with the pups though. "And of COURSE I'm coming along! You guys know where another one is?" She asked excitedly, clearly amped up at the notion of actually making PROGRESS in this endeavor! The wolves all around them starting to wag their tails as the little shreds of Lilynette seemed to get equally excited.

Ignacio Vega
Ignacio snorted somewhat derisively at the mention of being a part of their gang when the opposite was just as true. But these were not the lands of the Flaming Rings anymore, he was outside of his turf and thus a companion rather than a host. At the mention of whether he had the ring on his person, the hand that rested upon his sword raised to flash in the direction of Lilynette. The third and fourth finger, along with a little of the hand below, had been replaced with metal and a single ring clung to the third finger with a voracity that seemed like it wanted to consume the very metal upon which it sat.

"It does not leave my person. Any attempt to do so would not end well for anyone involved."

Despite her protests, he remained as stoic and formal as ever. Returning the hand to the pommel of his blade no sooner than he had made to highlight the ring in his possession.

"We have a lead. But I am here to ensure that Kurosaki Ichigo is worthy of pursuing the Rings at all. Should your cause prove to be ignoble then I will take what Rings we are able to recover and return to the furthest reaches of this desert to keep them from falling into the hands of the unworthy."