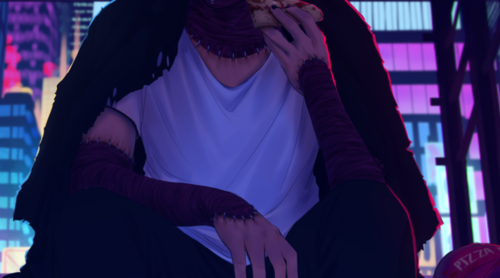 KOKUTO | DEVIL OF POWER
Arcades were often a stark contrast to the eerie serenity of the late hours. While not as loud as in the morning and afternoon, the bustle and noise of the cabinets was something that Kokuto felt a deep nostalgia toward. Born and raised in the time when they were more prevalent, it had become one of his favorite things as he grew up. Thankfully, now, there were places that still attempted to preserve the classic icon.

A brief billow of smoke came from his mouth, coiling around it and drifting behind him into the night sky. Burned, scarred fingers held the little remaining stub of his cigarette, reaching into his pocket to take out a small, personal ashtray that he tucked the stub in, before putting it away as he reached the arcade, opening the door. He gave a wave and a smile to the guy at the front, paying a fee for a few hours, then walking further in.

He went by a handful of the cabinets, gently running a hand over them. It wasn't all that busy at night, but there were the occasional few people that came to have a bit of fun before turning in for the night. Turning a corner as he reached the end of the row, Kokuto was about to starting looking through the next row when he heard someone going really hard at one of the cabinets.

Buttons being beat like a redheaded step-child, and either a joystick or special controller being tugged around like it owed someone money. Kokuto let out a quiet whistle as he turned the corner, seeing what seemed to be a little kid playing the Terminator cabinet on their own. They weren't doing bad, and hey, if they were having fun, maybe he could join in. So, walking up to them, Kokuto gave a light, friendly gesture and smile, even if they didn't see it, stopping next to them.

"Yo, you want an extra hand? These kinds of games are always more fun with a pal."

Ah, the arcade - a place full of nostalgia and agony for Liltotto. Nowhere NEAR tired after work, she had spotted a local place a week or two back and had decided to kick into player mode to take a load off. Of course, her version of taking a load off in an arcade was to absolutely massacre every game with a high score count. Place was nice and quiet late into the night, and it was a few hours before closing, why not, she felt. She recalled the 80s - 1980s mind you - still fresh to the new world and having tagged along with some chill teenagers (who she let believe she was just a little girl, and not an older woman trapped in a tiny body) who introduced her to their local hangout. It was... Nice, yet sad, to recall those much simpler times...

Though in the present moment, she let the past be the past, and was absolutely slamming it on her third try at completing one of the cabinets. She didn't even acknowledge the kind of game it was, she just was going to town on the tenth game she decided to tackle, brought up to height by a step stool she brought. She wondered if maybe Giselle would like this place as she went along - honestly she wasn't entirely sure of what new-world shit she enjoyed doing; a conversation for another time probably.

Her third try was going pretty well, least until some guy's voice was saying something in the background - she was too focused to really feel like paying attention, "Guy, i'm almost done, be patient," She'd murmur in response before getting unceremoniously game over'd, which only provoked slamming tiny fists and a loud, "God fucking damn it, robot piece of shit!"

She'd sigh and hop off her stool, picking it up and gesturing to the game, "Whatever dude, you have fun with that shit."

END | get out of my room im playing minecraft

KOKUTO | DEVIL OF POWER
Despite the friendly gesture, the kid mumbled out a response, likely hardly paying attention. Kokuto blinked -- surprised at the sass from such a little kid, only to be further surprised by the sudden slew of cursing. He wasn't some saint when it came to his own mouth, but hearing it from someone who hardly looked like they were in grade school was...certainly something.

Where the hell was this kid's parents, and what the fuck were they teaching her? So, as she picked up her stool and started moving along, Kokuto called out to her.

"Oi, kid, I was askin' if you wanted another player. You'll probably get further than with just one, especially with Terminator. Game's got two guns for a reason."

He offered another friendly gesture, smiling softly as he motioned toward the game. It sucked to lose to any number of things in a game, so, at the very least, he'd offer a chance to have fun with the game, instead of the experience being soured like that.

"Why's a kid out so late in the first place?"

Liltotto's brow would twitch, wondering what was even up with this demon guy and his apparent concern for her. His smell alone was irritating to her, that typical intoxicating, possessive stench that wanted to take whatever from you it desired.

"I'm not a kid, pal, and I don't need any help with playing a game," She'd call back to him, "In a world full of weirdos and immortals, i'd figure guys like you wouldn't be so quick to assume that I was just 'a kid'. I may be suppressing the shit out of my spiritual pressure, but you should be able to sense it this close."

Stool tucked under her arm, she'd roll her eyes and walk off to find some other game to try.

END | get out of my room im playing minecraft

KOKUTO | DEVIL OF POWER
Sass was hardly the word to call it at this point -- especially for someone who, apparently, wasn't a kid, despite appearances. Maybe he just wasn't used some of the things in the world, because he sure hadn't seen any kind of thousand-year-old child before. But, the comment on the world around them, filled with immortals, was something that caught his attention. So, despite the mild irritation at her sass, Kokuto took a few more steps after her, setting a hand on the cabinet next to him.

"Age doesn't equal power. Could be a thousand years old, and still only be about as strong as the average high schooler. Either way, I wasn't asking if you wanted help. I just asked if you wanted a second player, just someone to have fun and kill robots with."

He gave a light gesture to the cabinet, even if the girl couldn't see him. Maybe it wasn't the smartest idea to try and make nice with someone who was already sassy. But, hey, maybe they just hated the kid thing. If he were in her shoes, he probably would too,

"What's your name, and how old are you in reality then, anyhow?"