She honestly lost track of where exactly she'd wound up. These human places always had such odd flavors to them that it was easier to just stop paying attention at some point. Some vague memory floated in the back of her mind. Belgium? Coratia? One of those places. It gave her a headache just thinking about it. Did it really matter what expanse of fucked up landscape she was around? Something she'd come to appreciate quickly in the world of the Living. There were plenty of glistening cities with parimeters and all that. But there were also so many more places that were just savagely carved out. Overgrown and abandoned.

She sat on the very edge of what had once been a rather large skyscraped, crumbled and broken now, she didn't even know what to call this pillar thing she was sitting on. Some sort of support beam with a ladder on it? She didn't care.

What she DID care about was keeping her attention on the spiritual pressure that was floating around nearby. A hollow by the feel of it, but it was all the way out here, not hunting. Usually a good sign of the early beginnings of the mind being active. That or just one with very good hunting instincts. It'd be interesting either way. already a small pack of rieshi wolves was working it's way through the area. Eyeing the beast from afar, scouting the situation.

Her pesquisa told her that this individual was not too strong, but that was no reason to be sloppy. Hollows were exactly the type of creature that could surprise you. 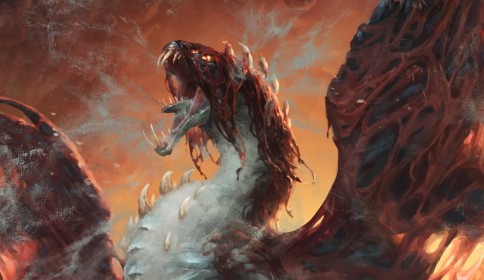 A Dragon | Nothing More, Nothing Less
The Dragon had fed for the day, and so that left her to simply wander. She had no hobbies, nor any desire for such, and she had no one to talk to. It was rare someone sat down and simply conversed with the big scary dragon. As it turns out, not many people were particularly willing to just sit around a dragon who's body was covered in spikes and acid. But that was fine. It pained her to lack such interaction when she was younger, but as she slowly became jaded towards the endless dread of eternity, she stopped caring nearly as much.

And so she walked, her heavy body stomping around beneath her sheer weight with every step. All she was doing was turning to observe her surroundings, moreso out of curiosity than out of wariness. Humans tended to abandon that which they did not need. Their kind was of constant evolution. She had always known that. But a whole city... The wastefulness left a sour taste in The Dragon's mouth.

But she wasn't the only one here. Another Hollow, she could smell it. What a distinct scent though. And these wolves... were they supposed to be sneaky? She was an animal too, her senses weren't the most acute but they were enough to notice when something was wrong. But wolves weren't made of reishi like this. So this was someone with a more developed power. But what did they have to gain from watching her?

"What do you want?" She said loud enough for the wolves to hear in an attempt to interact. "You're not clever, fool. I can smell you from over here. Show yourself or take your rats back to the shadows with you, coward."

If that didn't get their attention, she didn't know what would.

The wolves continued to watch the Dragon carefully as they seemed to regard them with scorn. Of course, seeing them call out, one of the wolves padded its way over and promptly sat on it's haunches before the great beast, looking up at the beast with a keen intelligence to it's eyes in response to it's jabs. Lily was used to the sort of barbs and insults that Hollows gave out. Fool. Coward. Smelly. Insults that simply passed through her with barely any effect. She was aware that the Hollow would feel most comfortable knowing exactly where she was. All the easier to eat her. But she knew well enough to ignore such taunts.

"Well well well. You ARE talkative for a hollow. That's pretty interesting. Usually the smart ones are ....smaller." The wolf commented, seeming entirely comfortable with simply conversing with the dragon as the rest of the pack simply observed from afar, resisting the urge to surround the dragon lest they feel cornered or trapped, all of them promptly formed up, forming ranks infront of the Dragon behind the one that was speaking to her. All so that the dragon could feel like she had an eye on the entire group.

A Dragon | Nothing More, Nothing Less

The dragon huffed in annoyance as one of the wolves padded up to her so casually and started speaking, no doubt the master through its pawns. Whatever it was, it was being inquisitive right off the bat. The Dragon preferred not to waste her breath when she could help it, and while she felt a strong urge to walk away, it was the creature's particular choice of question that pissed her off enough to stay and spitefully answer.

"Names are for cowards who are afraid of being forgotten."

Her words were firm, sharp, and pointed right at Lilynette. That would be more than enough for The Dragon to get her feelings across without needing to say much more, even if she wasn't really answering the question that was posed. But it didn't matter how little she knew or how disinterested she was, a pup like this in the middle of nowhere was strange. And with so little to do that they would walk right up to her in rank and form?

"What is a pup like you doing out here? Don't you have humans to consume?"

It was likely that this Hollow had also fed recently just like her. The passive aggressiveness in her tone should have conveyed her disinterest, but if the wolf thing still wanted to converse, then she would oblige if only because she too was bored.