A Good Return for Their Labor [Rafaela, Yugiri]

RAFAELA LEONE | REICHSRITTER
Despite all of her bravado, Rafaela's eyes gave away the degree to which she was genuinely paying attention, the sharpness of her gaze that studied every possible facet of the technique before her. It was complex, tremendously so, and it was nearly impossible to follow as Yugiri simply disappeared from her sight. It was only the fact that her own senses were so heightened, by both training and spiritual enhancement, that she could even discern the touches had not been simultaneous.

Rafaela laughed quite boisterously at that, tipping her hat a bit to Yugiri as a gesture of respect. She knew there wasn't any way she could compete with that. Even if she gave it her all right now, that was just on a whole other level. Of course, all that meant was that she would need to improve, get better, really commit to growing. Heh, she hadn't needed to do that in a long time now. How exciting.

"I see why His Majesty talks so highly about you. You're good, real good. The least I can do is show you something I've come up with, then. Right?"

Rolling her shoulder, Rafaela's cocky grin then subsided a touch, a sign that she was quite intensely focused. The crackling violet energy that had before covered her legs now began to coat most of her body, and in an intensity far greater than before. Even compared to Shikko, the finesse of it was lacking, but the sheer command of her own spiritual power was still impressive, if only for how clear it was that this was the majority of Rafaela's actual output. All of it seemed untamed, ready to burst out from her body, and then she shot forward, past Yugiri at a speed only a bit faster than before.

But what had not gone with her was the energy she'd built up. It did not move until the briefest moment after she had stepped, and crashed forward in a line past Yugiri. Rafaela knew that, even if she had intended for it to directly impact the other woman, she simply could have avoided it. The difference in speed between the two was immense. But she still had to show off, right? So she'd allowed that energy to fly close, very close.

"Don't have a name for it just yet. Still working on that one. I've been thinking I'd let someone else come up with that." 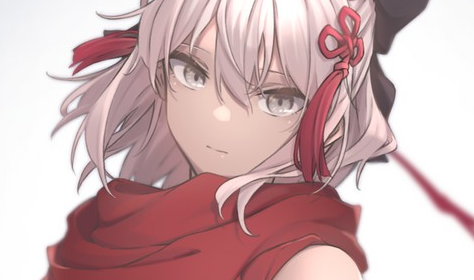 YUGIRI | WANDERING VIZARD
As Rafaela rushed towards her, Yugiri let out a small sidestep to avoid the wave of lightning that followed. She clapped her hands a little at the display, it was pretty good if unrefined but Yugiri thought that give her a couple of more years and it could be something very impressive. Maybe she could emulate it with her shunko? Ah, but she wasn't a copycat, she liked to create unique things more than learning what was already there.

"I think it's better to name things yourself, the creator putting the final touch on their creation. No?"

Yugiri admitted that it was a lot more philosophical than she usually was. Just a little bit of her traits that were less pronounced with the lifestyle that she'd adopted.

RAFAELA LEONE | REICHSRITTER
"Hmhm... Well that's pretty true, isn't it? But I don't feel satisfied with it yet, and I'm not gonna name anything until it's finished. Just not my style, you know?"

Rafaela allowed herself a laugh as she straightened out her skirt and her jacket, knowing they'd been messed up a bit as she zoomed passed. Well, she ought to let this girl through, and she had to admit that she was pretty cool.

"I might ask His Majesty if he has any ideas when he comes back. I'll walk you to the castle, don't want anyone thinking you just got through when I'm on patrol, after all."

Of course, she knew that Yugiri could have simply made it past, and that she could still zoom on by without any issue. But it just wasn't in Rafaela's nature to concede defeat without at least a little self-aggrandizing.

YUGIRI | WANDERING VIZARD
"Heh. Well, I guess I named Shikko preemptively but it works. It'll just grow from here and maybe I'll give it an even cooler name when it's done."

She said with a grin while putting her hands back behind her head and leaning back. Guess she could go meet Erchanhardt with Rafaela, not because she was in any rush or stuff like that but she did like this girl. She had spunk, you know? It was a really nice energy that Yugiri liked about her. If she was a shinigami, maybe she'd even jump to seeing if she'd be interested in learning hoho from her. She looked like she had a bit of a knack for it.

"I guess you can come, don't want me to show you up huh? Don't worry, I'll tell Erchanhardt you're a real doozie. Just don't make me look like a liar, yes?"

RAFAELA LEONE | REICHSRITTER
"I don't have any intentions of that. After all, if you're lying about me, then that means I'm not up to par, and I'm always above expectations."

Rafaela was the sort that always maintained her bravado, even in situations where she'd clearly been outclassed. After all, people didn't like to see a hero lose their spirit, did they? Besides, she'd never given up before, why should she now? That was quitter talk.

"Besides, even if someone shows me up, that just means I've got to improve. People don't want to be protected by someone weak, and I've got a lot of people that I have to keep safe. Even His Majesty is way stronger than I am, though...well, I guess if he does get married, I'll at least be able to keep her in check."

It maybe hadn't been her place to speak so casually about her Emperor's personal life, though that was something Rafaela didn't even actually think about. A consequence of her upbringing, more than anything else.

YUGIRI | WANDERING VIZARD
"That's a good attitude, now I expect that you'll catch me for sure next time you see me or else I'll..."

What? Yugiri honestly didn't know where she was going with this, what did people do to prank people? Wedgie her? Well, no. That wasn't as cool as something else that she could figure out, and far less mean.

"Well, call it a surprise hahaha."

Yugiri chuckled and then paused. What a damn minute, what did Rafaela just say?

"I'm sorry, what? What about Erchanhardt getting married?"

RAFAELA LEONE | REICHSRITTER
"Hm? Oh, well there isn't anything official yet, he hasn't proposed or anything of the like. But His Majesty took his girlfriend out on an extended camping trip, and while I wouldn't ever say anything with certainty about his personal life, I'm pretty confident I saw him readying a ring for her. I think he's planning to pop the question on her out there."

Was that fine to just share? Well, maybe. Probably. Hopefully? It was too late now, anyway, and Rafaela wasn't really the sort of woman to just spill half a secret and then awkwardly try to step back on that. She'd already let it loose, might as well be honest about the situation.

"I think she'll be a good thing for the Empire, if I had to guess. Good for His Majesty, too. She really knows how to light up a room."

YUGIRI | WANDERING VIZARD
Well, that was peculiar. She had heard about the woman called Himiko but how long had they been together? Not just that, Yugiri recalled Erchanhardt telling her about his past and she would be a little hesitant to say that she fully expected him to actually marry again. Did Ada know? It made her pause in thought for just a little bit however Yugiri wasn't the intrusive type, if he was happy and he wanted to do it then she'd support her friend's decisions.

Yugiri didn't miss the part about the camping trip either, how long was she going to be waiting around here? Maybe just a bit but that was fine too. It had been a while since she had kicked about this place and a little bit of time to enjoy some nostalgia couldn't hurt. Change was good after all, mostly.

"Good as well that she seems to liven things up, it's nice to see him when he's not in a gloom. I hope she says yes."

Would she say no? Yugiri knew of her only by name and a brief idea of what they got up together so as far as that went the vizard had no idea what her temperment or character was like in the flesh.

RAFAELA LEONE | REICHSRITTER
"I'm hoping she does, too. If I had to guess, I'd say she probably will, but I'm not a psychic and I definitely don't know too much about all that relationship stuff. I keep focused on my job and my training, no time for that."

Indeed, Rafaela had never once so much as held a boy's hand before, and she didn't really have any plans of changing that any time soon. She'd need to settle down, be a good proper housewife for that, and that would get in the way of her work as one of the Reichsritter. Maybe she could eventually, when her investigations were all finished, but even that seemed unlikely.

"I get the feeling he'll ask you to be a part of the wedding. He hasn't said anything about it, though then again, he hasn't been planning much of anything just yet. But call it a hunch on my end."