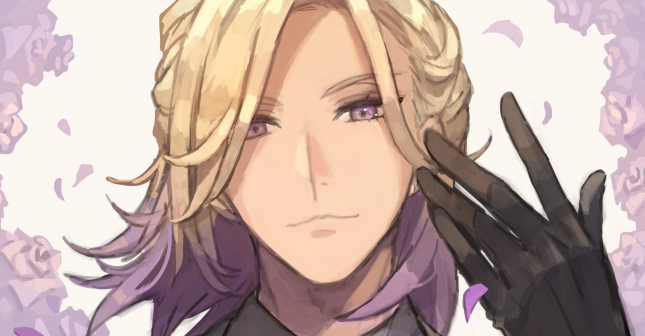 DORIAN DEMOISELLE | ALBEDOCHIFFREN ADMIN
"Thank you, Miss Lamperd. Just Dorian is fine. I don't want to keep things too formal here in my kitchen, it ruins the atmosphere."

Of course, all his junior cooks still referred to him as "chef," but that was more just standard kitchen operation than anything else, and he knew he would have done the exact same thing in their position. They even called him that outside the kitchen, that was just how things were.

"Maybe I don't need it, but I still came to the Vandenreich knowing I should probably try and find it. After all, these little things are good, but I'd like to be able to do things on a bigger scale, too. I don't like the thought of leaving it all to other people when I could help."

"Guess that's fair, Dorian," She'd lightly correct herself as she picked at her food for another bite, "With that in mind, just Lil is fine."

She supposed the man channeled that need for more into aid rather than perfecting his craft to people who would never truly appreciate it. That certainly was people, their feelings and desires never vanished, they merely shifted and changed into new paths and ideas over time. It was something she could admire about humanity - even with their flaws and inherent stubbornness, at some point they shift, be it for the better or worse. At least he sounded happy and fulfilled in his newer pursuits.

"I don't have much of a frame of reference for good salads, but this definitely is the best one i've had so far," She'd comment in her enjoyment, "Never figured i'd end up enjoying the taste."

She'd hmm for a moment in silence, before her gaze looked upwards to Dorian as he worked, "... I'm having the feeling your interest in me isn't limited to my impact on the budget," She'd stab a fork into the remaining greens, any warmth on her face becoming obscured once more, "Is it my condition?"

DORIAN DEMOISELLE | ALBEDOCHIFFREN ADMIN
"I'll be sure to remember that."

The main course was done resting, and he sliced the meat carefully before he poured over the sauce, setting some roasted potatoes and greens alongside it to complete it. A little garnish, and he set the plate in front of her.

"Am I that transparent? I do wear my heart on my sleeve, don't I? Yes, your condition is something that I think I'd be ashamed to simply ignore. Even if I can't solve the problem, I should try and help, shouldn't I? Especially in a position like mine."

To him, it was just natural that he feed someone that was hungry, even if that hunger was far beyond what might ever be called human.

Her eyes were fixed on the dish placed before her, the smell alone wonderful and catching, but it didn't change her expression. That ever permissive thought laid heavy on her mind; it wasn't that she doubted the man's kindness or will, but rather his response provoked that drear which stuck to her timelessly, and she wanted to know what he thought and felt to the reality of the situation,

"Even if that help cannot be dealt forever?" She'd begin cutting into the meat, slowly chewing and then swallowing before continuing, "I'm not a young woman, Dorian. I've met and bid farewell to many lives, my hunger is one of the only constants I have."

Her next swallow felt almost hard to do, not lifting her gaze. Her tone was soft, sad even at the idea she was about to propose, her eyes dark as they refused to look up, "At some point that will occur between us. That unknown point in an uncertain future; how does acknowledging that make you feel?"

She was practically squeezing her utensils, her demeanor far less relaxed than moments ago as she cut into her meal, almost as if she held some fear of the answer.

DORIAN DEMOISELLE | ALBEDOCHIFFREN ADMIN
That was quite a bleak question, wasn't it? Not that Dorian was taken aback or anything. After all, he was plenty used to serious discourse, and if anything, he welcomed it.

"We eventually say goodbye to everyone, don't we? I think it's only natural that I'll have to bid you a final farewell eventually. Doesn't that just mean I ought to do my best with the time between then and now?"

Maybe it was a matter of his upbringing, his earliest memories, or simply the hard life that came with having grown up in the kitchens, but Dorian wasn't the sort of man that was especially afraid of saying farewell. Sure, he didn't like the idea or anything, but it didn't prevent him from acting. He should have gone back to his station, started on dessert, but he felt like this particular part of the conversation would be better if he stayed here for the moment.

It was an expected answer from such a man, but the anxiety of the far more disheartening response had left her dominant hand slightly trembling as she would continue her meal, her unsteady fork carefully piercing the next cut of meat. Silence held her for a moment, before a labored breath pushed her to speak once more,

"I've been alive for many lifetimes, Dorian, and I have no indication that I wouldn't live for many more," She didn't move to take another bite, rather gently picking at the piece she selected with her fork, moving it in place with small circles as she spoke, "Anytime i'm confronted with kindness such as this, as much as I feel deep appreciation for it, another part of me asks: 'Do I deserve this, knowing in the end it will be lost to time?' 'Am I selfish for accepting this?'. I feel as if i'm taking and never returning, that I couldn't return it in the end."

She didn't often have a conversation like this, but Dorian had proven himself stubborn enough to draw it out of her, "I tried putting myself in a situation where I couldn't have such a situation occur, but I felt even more hollow then than I do now. So now... I don't know what to do. I feel I should live in the moment, but I also can't shake the thought of the end, where i'm alone again, until the next time."

Gripping her fork tightly, staring hard at her plate, she'd speak, her intent more prying for his view than asking his permission, "...Am I selfish for wanting to be happy, in such a scenario?"

DORIAN DEMOISELLE | ALBEDOCHIFFREN ADMIN
"I think you could call that selfish, sure. But that doesn't mean there's anything wrong with it, you know. People aren't obligated to be altruistic in everything they do, are they?"

To Dorian, it was a relatively straightforward matter. That wasn't to say he thought he could just make her issues into something that wasn't worth talking about, or anything along those lines, but how else could he show her reasonable support? It wasn't as if he knew her circumstances, he couldn't just tell her the answer to all of her problems.

"It being selfish doesn't mean it's wrong. You're allowed to accept generosity because people are offering it to you, at least as far as I think. You can just return the gesture in turn. If you think about these sorts of things like a debt that you have to repay, you'll never be happy."

Her gaze remained low, yet seemed to soften with his answer. Her underlying feelings surrounding the subject did not vanish with his words, but that wasn't to say his perspective did nothing to brighten her present mood. Of course she knew all of this, perhaps even told others such a thing if they were in the same place as she, but it was another thing entirely when she was the one personally experiencing that type of low. Sometimes, that perspective needed to come from another person, she figured in the moment.

"I can agree; thinking in such a way has led to plenty of unhappiness for me," Finally, she would cut into the meat to gather another bite, "I just felt as if maybe I was fated to be unhappy, that I should just accept i'd never truly feel satisfied."

She took a moment to finish taking and swallowing that bite before going on, "..I just stuff down how much I hate living in such a way, I guess? I've been living it and haven't had much beyond doing better for others than myself to deviate from it. So when occurrences like this happen it's.. A shake up, especially since I don't go out of my way to be noticed in such a way."

A low sigh would leave her lips, "..I'm grateful for your kindness, really. This has probably been the best food i've had in... Well, i'm not entirely sure. And i'd love to come by to help a man such as yourself when I can."

DORIAN DEMOISELLE | ALBEDOCHIFFREN ADMIN
"Nobody is fated to be happy or unhappy. I'm not the kind of person that thinks anyone can be happy in any circumstance, but a lot of it boils down to the cards life deals you and how you play them. At least, in my experience."

He supposed he'd known a few people that turned out in pretty radically different ways, so that did reinforce his own views on that matter. But, then again, Dorian's life wasn't a normal one, so he couldn't really make any claims one way or the other.

"Well, you're very welcome for it. I like to think I know a thing or two about what I'm doing, but it's all meaningless if I can't share it with epople, wouldn't you say? So it's nice to know that you enjoy it. I'd be glad to have you come by whenever you're free, so don't be a stranger. The kitchen is open from 5 in the morning to 9 at night, so whenever you're available, just come in. We'll have to get you sized for some whites if you come in enough, though."

Finally, she looked up at him. Though a glint of sadness was still in her eyes, she seemed far more at ease, "Makes sense, i'll think on this more. Thanks for your input."

Her tone was completely genuine as she picked another bite of her dish. Certainly, if she didn't have a bottomless stomach, she would've been completely stuffed by now. It made it feel a little less awful in the moment - at least she could eat as much as she was offered, not wasting a single bite of the delicious food. Definitely no excuse for wasting.

A smile would grow on her face, soon becoming a soft laugh towards the sizing comment in particular, "Then i'll make sure to drop by as much as I can, then. A new experience wouldn't hurt to practice often."

Perhaps, she smiled a little wider than normal with that teasing comment, "Definitely won't be the last you see of me."