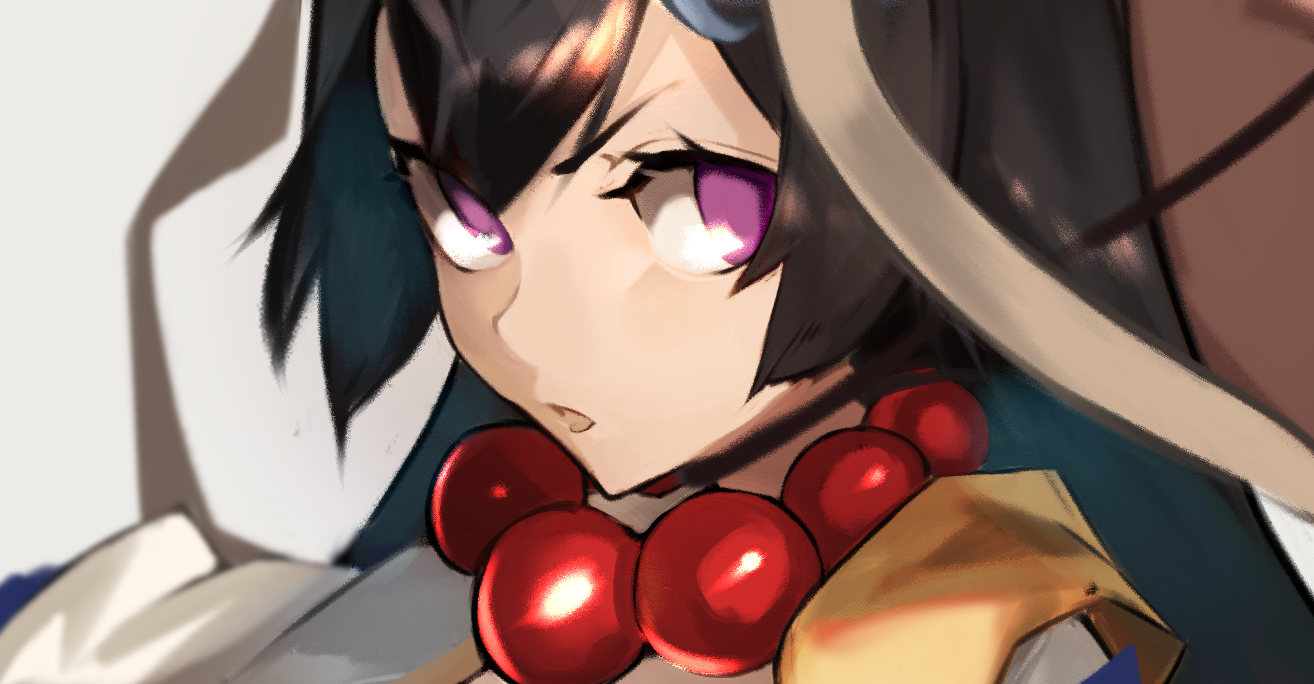 BAMBIETTA BASTERBINE | SUBSTITUTE SHINIGAMI
Walking along the lake's bottom, Bambietta's demeanor had shifted a good bit, a much more stern expression crossing her face as she shifted more into the manner she'd had to adopt in the penal legion. She muttered another incantation, a small ball of orange light forming in her hand to light the way.

"Keep on your toes."

The tension she'd already had on the lake's shore had only been magnified, looking as though she was ready to pounce at a moment's notice. A few bones, rocks, and other assorted minor debris littered the floor, but it wasn't too difficult to muck through. She could definitely tell they were getting closer, and she stopped after a moment to kneel down and feel the sediment.

"Hm... I think it's deeper. I'm picking up more in line with Shadow Fall, at least. Something under the lake, maybe, or at the very least they were here briefly."

ALASTOR
"Is that so? In that case prepare to patch a hole."

He told her while crouching down to look at the ground they were standing on. A bit of a quick check to try and get an idea of what he was about to hit before he stood back up and stretched a bit, raising his foot before bringing it down and smashing his foot into the ground with the intention to direct the force straight down rather than make the entire ground give out beneath them. Hopefully her bubble kept the water from pouring down.

She liked kido, she was absolutely a damn nerd.

The bubble held up perfectly well, and the ground below crumbled downward, though the floor was still fairly thick. The hole led into what looked to be sheer darkness, and Bambietta muttered a few more incantations to send a second light down into the blackness, as well as to make the bubble stay in place rather than following her around. It looked to be an artificial formation below them, though well-worn and definitely not having been carved by anyone worrying about aesthetic.

"Mm... Not what I'd expected. Think we should call this in?"

It was a genuine question, though Bambietta didn't sound outright worried about the two of them. She was squarely in professionalism mode now, and her concern there wasn't toward anything regarding her own well-being. It was just a matter of getting the job done.

ALASTOR
"Depends what it is."

He said and jumped on down, proceeding with some caution but ready to throw down with any threat that came their way rather than making a plan. If there were people down here then he wanted to make the first move before they could react in any meaningful way. Throwing the first punch helped you know.

By the time that he landed Alastor manifested some of the fire in his hand from his boiling blood, illuminating the area with the flames that burned independent of environmental factors like available oxygen or conditions. He took a look around while waiting for Bambietta to join.

He sure hoped that this wasn't going to be a pain in the ass to deal with, at the same time he hadn't really had a chance to get very serious since he finished with Midori. A bit of limit testing was nice and if worse came to worse a quick escape could be arranged, right?

BAMBIETTA BASTERBINE | SUBSTITUTE SHINIGAMI
Following in after she was certain Alastor hadn't run into any serious issues, Bambietta kept her zanpakuto close, still ready for anything that cropped up but not overly tense. The tunnel itself wound downward in a vaguely spiralling manner, clearly having been bored out by something, though not in anything resembling a neatly organized way. Water dripped from the walls, coating the floor, and she made sure not to slip on it.

"Definitely getting closer. More of the typical demon stuff for sure, but I don't really know what I'm picking up."

Frankly, she was equal parts fascinated and concerned about whatever it was they would find down here, but after a certain point they reached a spot where equipment looked to have been haphazardly left behind. Surveying devices, material for excavation, though not much in the way of any proper answers.

"I'm guessing whatever they were doing here probably got cut short by the war. This looks like it's only been here for a little while."

The tunnel was decidedly less wide now, though still plenty big for the two of them to continue walking through.

"I'd say we've got to be half a kilometer down already, though. Whatever they were digging for has to have been buried for a long time."

ALASTOR
"Yeah, so what the fuck was it."

He asked rhetorically, a little frustrated really that Shadow Fall had just been up to something like this under their noses. It must be a pretty big deal to dig out a place like this, what did they know that the Gotei didn't? It was just that kind of pain in the ass that he hated about those bastards.

"Right, well Ms Kido expert. Since the place seems abandoned, you wanna do some of your magic crap and finish the job so we can see what they were after?"

Alastor asked with the large sword over his shoulder and another glance or two about the place. Couldn't be too careful about any traps or spooky monstrous junk they might've left down here as a defence to protect what they were after.

BAMBIETTA BASTERBINE | SUBSTITUTE SHINIGAMI
Nodding, Bambietta brought her hands upward and began another of her chants, before the wall before her gradually started dissolving away with an almost acidic effect. She stepped forward as the tunnel continued onward, her hands still directing the dissolution of what was definitely becoming a harder, much more long-established sort of earth.

Her head turned to one side, staring at what would have definitely been off their little path, and began her dissolution of the earth as they kept walking. For a second, she thought she might have just been wrong, and she would have gone back, had she not suddenly heard the faint sound of something small striking the ground. That wasn't right, or at least, wasn't normal. It would have had to be pretty spiritually resilient to hold up to this, and she crouched down for a moment to inspect whatever it was.

He sounded astounded by what she had just said to him, a fucking ring was what they were going through all this to get? If he were a bit younger he'd have called her stupid and just grabbed the thing but no, he'd accepted that there were rpretty screwed up things in the world and a could be disguised as asinine things.

:I guess we are calling it in then."

Alastor stated while going for the daireishinki to begin clicking away at a report. If Shadow Fall had wanted it badly then it was something he'd rather the Gotei possessed.

More of her muttered incantations, and Bambietta began surrounding the object in protective barriers for the sake of transport. She didn't have any clue what they were looking at, but that fact alone made her unwilling to just touch the thing. She wasn't nearly so stupid as to think she ought to just touch something mysterious she'd found buried and being hunted by Shadow Fall, and before long she had it at least transportable in a small bubble of spiritual power. She still wasn't touching it, but she could at least move it now.

"Let them know it's ready for transport. Just make sure you let them know that I don't have any clue what this is. I know those idiots in the 3rd are probably going to be chomping at the bit to get their hands on it."

There was a certain degree of levity to her tone now, if only because she'd found what had set her off. However, she was still tensed, still on her guard. She wouldn't be feeling any better until they were actually out of this tunnel and this thing was secure.

ALASTOR
Tapping away to continue the report, passing on details from the kido nerd and that it was ready for transport as well. Once he was satisfied he snapped the communication device shut and pocketed it.

"So are we waiting down here or taking it back up?"

She had secured it after all, hadn't she?