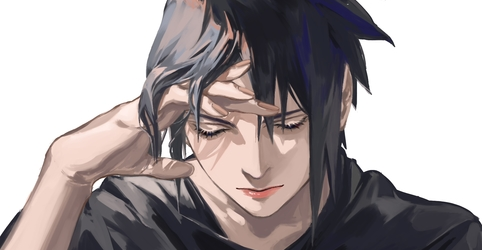 HENREX ASTILLON | STORMSWORD
If there was one thing that he never seemed to learn about Ulv and Hvit, it was that arguing with them was pointless. It was like talking to a brick wall, most of the time, and it only ended in more and more frustration. So, closing his eyes, he just took a in a deep breath, cooling his irritation as Hvit's energy began to pour out. But, instead of the violent and furious rage that Ulv's energy often took, it felt...soothing, in a way, like that strange form that Ulv had taken the last time she had visited him in the Seireitei.

The firmness, yet added softness, like a mother. Paradoxical, yet natural. The fist curled in his pocket loosened, his irritated tension relaxed, and his voice no longer held the venom, bitterness and malice that it had before. Yet, the idea of something good coming from these moments of grief and heartache were, to him, utter nonsense. What good had come from being abandoned, led on, and lied to?

"Therein showcasing the difference between us, once again. I say focus on the good times you have, you immediately focus on the bad times you had. And yet you still trust your opinions on your ousting from the positions you held?"

If there was one thing that she never seemed to learn about Henrex, it was that arguing with him was pointless. It was like talking to a quagmire of despair, and even in victory and progress, it only ended in more and more frustration. Because he would destroy it, by next they met.

"If fucking Algos can manage to get her Origin under control, then don't give me any shit about your 'nature'. At this point, you are in your position because you want to be in your position. Just accept that, admit that, and we will all be happier for it"

HENREX ASTILLON | STORMSWORD
An eerie silence fell between the two as the half-breed remained silent. The bustle and noises of the city seemed almost deafening by comparison. His eyes closed, and he took in a long, deep inhale and held it for a moment. His shoulders gradually fell and his head lowered as the silence was finally broken by a quiet sigh. Even closed, his eyes relaxed.

He couldn't even remember if there were any good times with Taichou. The one little "date" they had, catching up with one another, and then, nothing. She disappeared, reappearing months, years later, only to disappear again. He could remember the time he spent with Azela, brief as it was, and the memory of that brought the hints of a smile to his face. But, it quickly faded as his eyes began to open, an almost submissive tiredness to them.

"You can be really irritating, you know. As much as I hate to admit it...you're right. I don't know who 'Algos' is, but, at the very least, I'll admit that...I'm here because I want to be, I suppose. What now?"

Guy really did find the deepest hole and expunge half his memories into it. Not knowing the Princess of the Demon World, who was a major part of the Demonic Incursion, and a buzz during World War 4....well, despite his claims it was obvious there were some reasons for his dismissal.

"That is exactly why I am really irritating. Because I am right. And nobody likes to hear that someone else is right, because it means they are wrong Triply so in these circumstances.

Though, now, you decide. Stand up or stay down. Neither is correct, neither is right. Ulv pushed the positive, progressive path but some people just don't want that. They want to be miserable because it's a predictable emotion, easy to handle, doesn't need maintaining. They are low effort creatures that want a low effort life, and should be respected"

HENREX ASTILLON | STORMSWORD
"You should really learn to temper your bravado. Nobody is always right. Just because you're irritating doesn't mean you're right. Sometimes, people might just think you're insufferable. There can be pride taken in being humble."

However, now the question was to stand up or stand down. Perhaps, the better question was, will he continue to stand, or once again stand down? A question that he had been posed to him throughout multiple points of his life, and despite how many times he seemed to think that he was standing up, he ended up standing down. Perhaps now, he'd be able to remain standing.

"I wish that it were that simple. Human emotions and desires are far more complicated than that. But, at least for myself, I hope to remain standing this time. Suppose I'll need to give Ci Lan or Izanami a visit somewhat soon, it seems."

"Being insufferable doesn't make me wrong, darling. There are times to be humble, and times to annoy the cute Bird-brained sub you've known for about 6 years now" Hvit teased, giving a gentle laugh. And then he gave his usual stuff, so she'd shake her head at him and exhale.

"It is that simple, Henrex. There is no 'I want' there is no 'I wish' there is no 'If only'. There is only I will and I won't. Do you spawn your Tulpa with wishes and attempts, or do you create it by solidifying the sheer will to tell Reality what is and isn't there? Do not accept the world for what it is, make the world as you wish it"

HENREX ASTILLON | STORMSWORD
Quietly sighing, Henrex held his tongue. He thought to respond, but, decided against it, ignoring the "cute" and "sub" comments. Instead, his mind instead occupied by the next portion of her statement. For some reason, he couldn't stop thinking of the fact that they had known one another for almost six years. It sure seemed like every moment was when she considered it to be the time to annoy him.

His eyes turned down for a moment, bringing a hand up from his side, closing his fingers as if he were grasping something. In that moment, a sword manifested in his hand, carved into existence through his own will, the desire to protect those he loved with a stalwart heart, to be both sword and shield for them.

"It might be easy for someone like me and you, who have that ability to change the world, to give orders to existence itself and force it to obey us, but, to drastically simplify that is short-sighted. To desire and to wish can lead to progression, those are the first steps."

"Everyone has the ability to force reality to obey us. Mirja learned a Tulpa when she was barely a seated member, and taught it to Abalia way back when she was merely a police officer. Taught it to Steiner when he was just A Guy. Where those two ended up, has no baring on how they began. With tenacity, with determination, with a refusal to accept the excuse of 'If Only' and 'I wish'. Everything is difficult at first, everything is a journey of a thousand miles, everything is beyond the horizon. But to not begin a journey simply because it is long, will see you paralyzed for all eternity"

Hvit would cross her arms and stare to Henrex, watching his reactions and his emotions.

"The problem with Ulv is that she couldn't let go of you because you kept leading her on. Mirja was broken, everyone knows that, she was crawling through glass shards in the hope of finding something to hold onto. But Ulv was different, and every time you met, you showed a progression and a will to strive forward. The desire, and often the action, to take to the horizon.

The mind-searing rage that she felt every moment of every day didn't help, but that was the crux of why she was so furious every time you fell back to the starting point and just lingered there. Because you had not refused her, had not shown you can't"