The Devil On Your Shoulder [Freyja/Kokuto]

The Devil On Your Shoulder [Freyja/Kokuto] 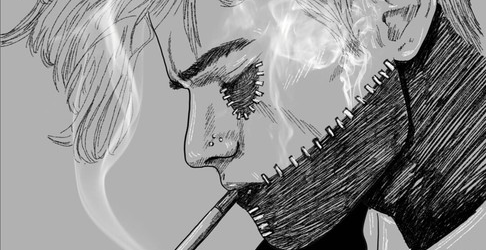 It was a pleasant surprise to find out that the City of Lights had arcades. It was a nice taste of nostalgia from the older days of his life when he was a human, but it was also a nice way to spend time when he was off duty. So, as a flame ignited on his finger, lighting the cigarette between his lips, Kokuto grinned as he made his way to one of said arcades. He took a long drag from the stick, sighing softly as a long column of smoke drifted from his mouth into the night sky.

As he opened the door, paid for a few hours, Kokuto took a look around at the cabinets available. There were a few racing games that he hadn't tried out yet. There were the classics like Donkey Kong, Mario, and Terminator, but the one he had set his sights on tonight were a personal favorite genre of video game, even to this day: fighting games.

An entire game genre not just about personal skill, but also about beating the shit out of another player, the whole concept was great. And, there was one game he was looking for in particular tonight, and as he made his was over to where it was, he noticed someone already on the Virtua Fighter cabinet, and they were going hard. It was a girl, and her face was the entire definition of the word "focused."

And Kokuto couldn't lie, she was damn good at the game, too -- he was impressed. He chuckled softly, gently tapping her on the shoulder as the match ended.

"Yo, nice job. You're really good at this. Ya want an opponent? Fightin' against players is a completely different experience than just beatin' up AI. Plus, it'd be fun."

Each finger entered the game's inputs with a flawless grace that spoke to natural-born skill, as if the blonde-haired female in question had studied the game for ages. To anyone's surprise, this was her first time - well, to be more precise, her first few times so far. As unexpected as her presence was here, truth be told, a personal soldat of hers was wholly obsessed with arcade games - namely those of the fighting game genre.

Freyja was reluctantly pulled along since the soldat in question needed a partner and yet, her personal bodyguard was nowhere to be found. Remaining idle in such a place as this would've made her self-conscious and leave the woman behind. On a whim, she chose the virtua fighter cabinet in particular and though her first few times led to nothing but overwhelming losses - everything began to click together. Now, there didn't seem to be anyone who could pull her away from her growing obsession.

A light touch on her shoulder would catch her attention as she turned to face the considerably taller man - Kokuto. Judging from his energy, he was the demon she had been informed about during her briefings as an official member of the Sternritter. A solemn nod would follow as the woman nodded, gazing up at him with a pair of azure eyes.

"An opponent would be a pleasant change of pace from the repetitious, dare I say, monotonous nature of facing a computer. Though I hardly expected to meet you here of all places, it is an honor to meet a fellow Sternritter. I am Freyja Solheim."

KOKUTO | DEVIL OF POWER
Well, when he first approached the shorter girl, he wasn't really expecting such a response to come from her. Her voice was strangely matter-of-fact, a way of speaking that probably got a lot of people confused and thought of her like a robot. But, that sure wasn't going to deter him as he offered a grin in response. It was surprising that she knew of him already, since she seemed like a new face. She did her research, that was for sure. His head turned to look at the arcade cabinet, smiling wistfully as he remembered when he first saw one of these in an arcade when he was young.

"I'm sure a lot of people don't expect to see a guy like me in an arcade. But, I grew up in a time when these were explodin' in popularity. I guess it's kind of a guilty pleasure of sorts, findin' somethin' so ancient so much fun."

He paused, turning to face her, extending his hand in an offer for a handshake.

"Kokuto Rooks, and ya guessed it, member of the Vandenreich. Don't think I've seen you around before, little lady, what's your name, 'n where in the Vandenreich are ya?"

"Freyja Solheim. Coordinator. Sternritter Division. Pleasure to make your acquaintance, Mr.Rooks," Freyja would reply, bowing gracefully before him before gazing at the cabinet, continuing to observe it with her eyes. Azure orbs would return unto the tall demon as she found herself interested in the thought of engaging him in a match and conversation.

It would serve as a fine distraction from wandering around aimlessly or remaining on this game for hours on end, especially when someone else might possess a desire to play. Turning to present a position beside herself at the cabinet, Freyja would begin reflecting on his words.

There was no place for her to speak on his past experiences nor whether or not he belonged within a place like this but it was certainly interesting to know these games had existed far before she was even born. Relics of the past were truly amusing...

"Guilty pleasure though it may be, If it brings you a measure of satisfaction, I find no reason not to enjoy something of the past that brings you a peace of mind. Minutes have passed and I oddly find myself enthralled by the patterns and motions of it all. Come, let me test my skills against you, Mr.Rooks."