Give Praise, For He Has No Equal [Mazda, Liltotto] 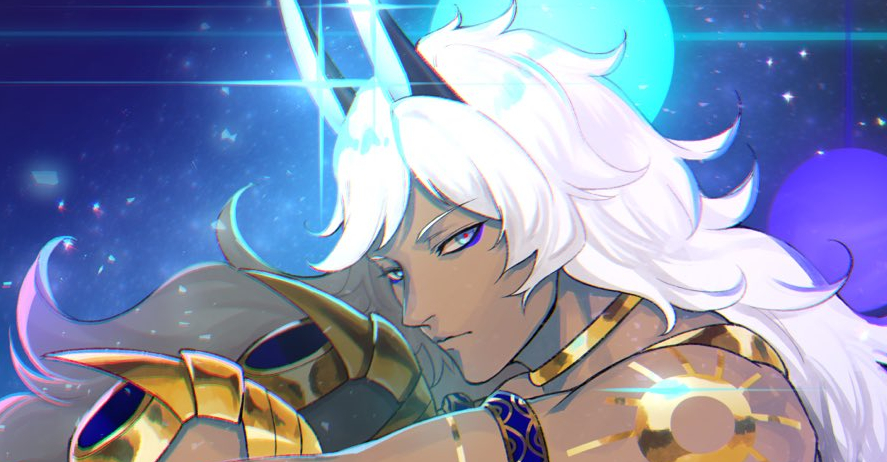 AHURA MAZDA
"To think as humans do is no sin. To be like them is a gift that ought be cherished, even in all of their shortcomings. Their lives are short ones, filled with mistakes, and yet they change, they grow. Their lives take on all myriad forms and, in the end, they pass on to make way for something greater than themselves. Those good-natured humans, who find the bridge of judgement wide and who walk easily into the House of Song, are infinitely more beautiful than anything that I might speak into creation."

The question that she had asked him was one which only briefly resonated in his mind. It was a question that Mazda understood to have many layers, but to him, there was only ever one answer.

"I have no regrets in my existence. Every action I have taken, every step I have walked, has been in my best judgement and been righteous in my eyes. Whether others perceive it to be so is inconsequential. I could not do what I have done if I walked among them so kindly, could not now separate myself if that were not my place as deigned by the heavens. Such scorn is but providence. It will make the parting all the easier."

Mazda was not a human, nor had he ever been. What humanity he had was but fragmentary, imposed upon him by the man from whom he had emerged. His emotions were those of the divine, his bonds were those that could only ever be temporary. What they asked of him was inconsequential.

Rubbing her wet eyes, she'd nod in silent agreement. Despite not thinking or feeling as a human would, he had a much better understanding, and admiration of them than she had initially anticipated of someone like he. Even in her earliest years as an odd child, she looked upon the first two who had taken her in kindly, even in that much more instinctive state of infancy. Even if she was not theirs, they loved her as if she were any other human child, and their perishing hurt terribly to experience. Thus was the case for her next caretaker as well, in all her oddities - as much as she made herself to be otherwise, she was still human, she still loved, and her initial perishing hurt just as much as her original parents'.

Of course, his response would only be of the perspective of something inhuman, it was to be expected, but tragic in a way. To live, and then in a way die, without ever experiencing an ounce of humanity. Of course, she felt her perspective to be influenced by bias, but at the same time she couldn't help but feel a sort of sadness for him.

"I see." Her tone was far calmer, her body having relaxed, eased into the moment and looking out into the sea. It didn't feel fair that he had to come and go without ever experiencing the joys and sadness of humanity, as he had said indulging in such would cloud his ability to do what he felt had to be done, regardless of if she agreed with the action or not.

"...I had a stupid idea," She'd look to him, "If there was a chance, even the smallest, tiniest speck, even if indirectly, that you could experience humanity, that you could be welcomed with open arms rather than scorn, that you could feel what it's like to be human, even while fulfilling your duty, would you take it?"

AHURA MAZDA
"I would not, for that is not my place."

Mazda was quite assured in that. The things that he might have wanted, were he a human, were things that he knew he would not dare to throw away. He knew, all too well, that he would become so very like the man that he hated most of all in existence. And to be like that, to cast away one's ambitions, one's purpose, for the sake of human desire, would make him a hollow existence indeed.

"I would quite prefer to stay at this distance, even if it is all that I have ever known. For it is as I said. The sun would turn the world to ash if it came even an inch closer. This existence is the one that I have been granted, the one that has allowed me to carry forth what needs to be done."

There was no sadness in it, no regret or despair. To Mazda, this was simply the nature of his existence. The only lamentation was that, in his aims, he would become so distant as to likely never see the children he had guided again.

"What I would ask, instead, is simply that you live among them in the way that I cannot. That you grow with them, walk among them. If you and I are cut of the same cloth, born of the same being, then that alone is enough for me to say that I have walked that path as well."

Liltotto would simply close her eyes, and nod.

"I understand," Clearly he had no fears or regrets in what he's decided, and whatever reasons he had for rejecting it, she would not pry. She never poked into another's business unless they were willing to open up, and she would still refrain from doing such, even with a god.

"Even if I don't like the idea, I can't stop you from fulfilling what you feel must be done," A labored sigh left her lips, "Guess i'll just have to be human for the both of us, or one of us - whatever. I dunno how this god splitting crap works."

She'd chuckle tiredly, earnestly feeling a little better in referring to herself as human, "Guess i'll really have to commit to it then, huh? Friends, family, whatnot... I was getting pretty tired of running away from it, anyway."

There was already a few things she was contemplating she do, or stop doing, even if she felt a little hesitance to some things. Well, she just had to learn to suck it up and deal with it; she couldn't be happy if she only ever turned herself away.

AHURA MAZDA
"That is good to hear. I will look forward to hearing about those things from you, until the day comes that I must take up the mantle of Soul King in full. Perhaps, if I am fortunate enough, I will still be able to know of your undertakings even after I have done so."

Mazda knew, of course, that the role of Soul King was a bitter one indeed. That to usurp him in his entirety would be something that he could not simply do without grave sacrifice. But he would have ample time to come to terms with that loss, for this was hardly something that could be done easily. There was much more to be done, people with whom to speak, things that he had no choice but to study closely.

For now, though, he would simply watch the sea.

"I hope you the very best, Liltotto. If you are to live as a human, then I will do what I may to watch over you as I do all of them."

She'd sigh, almost contently in response, "Just don't let shit get too messed up. I'll be able to tell, after all," She'd gently smirk.

Liltotto contemplated a few things - what she would do moving forward, definitely would try to be closer to everyone. If this was worth bringing up to Cyrus, even if he knew, she was pretty sure Mazda couldn't be stopped. What she felt right now - probably much better than she normally did.

"..Hope the best for you, Mazda. If you make shit even a little less broken, i'd be thankful of you."