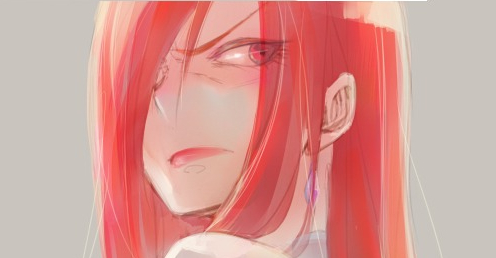 "Hurry up, will ya? We don't have all day. The train'll leave at any minute."

With her voice an annoyed drawl, Elyss flicked up her shades to stare down the woman who had decided to take her time following. It's fine to be entranced by the decor and such all about the town, but Elyss would not be happy if they ended up missing their train. Minatumi is a nice place, but Elyss has seen it all before. It's wrong to rush her partner, but they're on a bit of a schedule. Excuse her for wanting to get to the actual attractions and such that they aimed to bear witness of. Also, pray forbid anyone get their foot under her tapping sole. Now that'll leave a mark.

"Of course, of course. Forgive me for allowing my momentary curiosities to get the better of me." Compared to the agitated woman, whose voice was brash and demanding, the elegant woman tarrying behind her was soft-spoken and gentle, emanating a graceful aura. Her usual gait often carried an air of elegance to it but there was no time to look pretty for the public eye. Elyss was a temperamental woman. It was in her best interest not to tempt fate and annoy her even further, even if she found that facet about her to be more charming than frightening. It'd be interesting to explore the attractions and spend some time with the woman walking a few paces beside her.

"Tch. Sightsee on your own time. I made a whole schedule!"

Irate, per the norm, Elyss couldn't help but let her face twist with disdain. She hated this part of traveling the most. Planning it, mapping it out, enjoying yourself: that's easy. However, this, the packed train before them, is going to make her lose her mind. Of course, they could have just used their Shinigami connections to just open a gate to their destination, but Elyss proved stubborn enough to reinforce they do it like people normally do this. That means picking a starting point and traveling by train or car or whatever they may find along the way.

"Out of the way!" She'd yell, taking Hime by the hand and manhandling the woman forward through the crowd, bumping and shoving anyone out of the way until they found themselves on the train and seated. Well, Hime would find herself in a seat, with Elyss towering over her, albeit protectively. The redhead isn't stupid enough to take her significant other on a train without understanding how others would view Hime. Isn't it funny how silly Elyss gets at times? From stubbornly wanting to be normal, to being mad that she decided to be normal.

Hime contemplated pointing out that things would have been much simpler if they had chosen the senkaimon route but Elyss remained stubbornly adamant about traveling as though they, too, were residents of this world. It was truly adorable, enough to make the graceful woman smile warmly as she sat beside her crimson-haired lover, who kept her hidden from wandering eyes. Even without towering over her, a fierce gaze from the crimson-haired captain would likely destroy any semblance of bravery one might have to approach her. Leaning back, Hime would cross her arms as her eyes observed the scenery through the window.

"There is never a dull moment with you, Ely. You were the one who decided we adopt the civilian approach, no? Even so, it's always charming to see you being stubborn and pouty. With that being said, allow me to thank you for taking me here. It's a nice change of pace from the soul society."

"Someone complaining is just a part of this as well," Elyss muttered, rolling her eyes at the smart ass sitting in front of her. Cut the redhead some slack. She's just doing her job. Would Hime prefer being left to the wolves? Maybe... The woman seems to be keen at flirtatious fun. Elyss doesn't trust this lady to not tempt some pour soul just by existing. Elyss thought herself somehow weirdly able of attracting attention. Hime, on the other hand, is another level of attraction.

"Anyway, I've taken some time off for this, so you better make the best of it."

But that doesn't really matter since Elyss sort of just has Hime with her in her office at times, or Elyss just takes her work with her to where she's going half the time. This is just a trip to get away from everyone else and not have to worry about any emergencies. Though, if she's called, Elyss will get back to Soul Society. It all depends on the type of emergency.

At least Elyss is able to spare some nice words after being so of the fact about the trip.

True. Complaints were a common theme on a date. The graceful Shinigami supposed that was the truth. There was no particular urge to contest it, even if the elegant woman felt a hint of amusing delight in teasing her crimson-haired companion. She likened the act to bothering an agitated cat who might scratch its owner in retaliation after bothering them too much. Hime had recently learned that playing with fire while exhilarating to a degree, was a process that required a diligent approach when it concerned the fiery woman sitting beside her. Better to err on the side of caution and choose her moments carefully. A warm smile would form across her lips as she gently wrapped her fingers around Ely's hand. It was a nice change of pace from the typical work environment, doubly so to share the company with her beloved redhead. The compliment was simply icing on the cake.

"You look quite lovely as well, Ely. I'm truly grateful you took time off of your schedule to treat me to a time out in the city. I do hope I can return the favor by showing my gratitude."

Finding anything else as useless drabble, whatever was coming out of Elyss' mouth simply faded into the cesspool of commotion around them. The redhead's expression was nothing less than complacent, if not as simple as a man's normal face. She seemed neither happy nor sad, angry nor annoyed. Though, her poker face is a specialty that none have found able to simply replicate outside of a certain other. Content: that is the best word to describe Elyss.

She is fine with this. Sitting here, Hime being cautious yet daring all at once. Elyss doesn't mind any sort of affection being thrown her way, even if she's not one to openly return it. It's too comical to watch someone try their best to complete a maze that only has one passage. She should give her partner a hint, but her sadism shows itself in funny ways.

"Once we're off, we're heading straight to the hotel."

Not even an acknowledgement of the words Hime gave? Huh.

A true enigma. An apt descriptor for her crimson-haired companion who offered nothing but a poker face that displayed a neutral sense of emotion at best. Those of lesser mettle may have felt ignored but the graceful woman sitting beside Elyss embraced this cat and mouse game wholeheartedly. She was quite smitten with the woman's mercurial nature. What did she say? Did she tell her not to be so bold as to grab her hand? Did she enjoy her newfound boldness? It was so much commotion on the train, that she could hardly figure out what she said. Her grip remained firm around her companion's hand as she smiled. Elyss would finally speak, indicating her intent to go to the hotel once they arrived. Hm, now wasn't that interesting? A hotel would be their first location of choice. Of course, she was far from foolish to misconstrue anything from that simple statement. Curt as it was, the graceful woman likely assumed that Elyss simply wanted to get settled in first. Perhaps the woman intended for them to spend more than just one day enjoying their trip. It made sense, after all. She cleared her schedule up to make this happen. Why not enjoy it to its utmost?

"Very well. It makes sense if our intent is to treat this as if it's a trip rather than a simple day out. You cleared your schedule to make this happen, after all. Come to think of it, I think this will be my first time sharing a hotel with someone else. How amusing..."

Leaning back into her chair, Hime would smirk softly as she continued to hold Ely's hand, gentle fingers dancing every now and then against her palm. Whatever was in store, Hime certainly welcomed it with open arms.

“What’s the point of a date without some memory making?” Elyss muttered, nonchalantly teasing.

Though, she didn’t seem to change her expression at first. Her time with Ulv had dulled that part of her that would have done something a bit more, like give a cheeky smile or blow a kiss Hime’s way. The only indication outside of her words, at first, was just a small squeeze of that hand messing with her own. Maybe she did it more so to stop Hime from playing with her fingers so much. That was starting to get a bit annoying, but annoyance and endearment work hand in hand sometimes, literally in this situation.

But, it wouldn’t be in fair sport to simply leave her pal without anything else outside of an oddly unclear statement. Elyss is known for being a direct ass after all. That’s why she just turned her head slightly and gave Hime a look. Her eyes knitted, Elyss’ expression would have made any normal person soil themselves. Ulv would be proud of the absoluteness in Elyss’ gaze. In short, Hime would probably feel like prey, and Elyss her predator.

“Besides, hotels aren’t just for sleeping.”