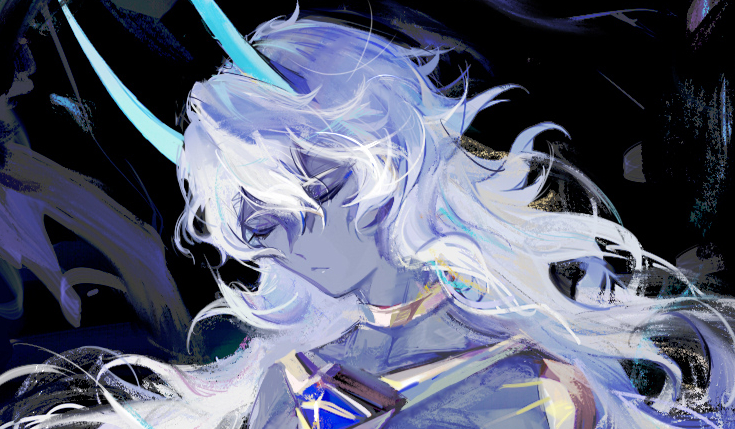 AHURA MAZDA | AND I PRAY TO YOU...
For all of Mazda's words on this moment, all of the promises he had made, it seemed almost saddening to finally stand here, in the empty wastes of Australia, knowing that his time in the world of men was soon to end. He would certainly miss it. To walk among those he loved, to see all things grow and to nurture what needed to be nurtured. But his life, his desires, were wholly inconsequential in comparison to what he now strove to do. He had taken in the essence of Black World from that small creature, a gift he doubted she had truly understood. He, a being of the Soul King's own existence, was now at the same time his fundamental opposite. That meant it was only a matter of following that nature to its ultimate conclusion-

Assimilation. The ego-death of the sun, for the sake of a new world's dawn.

There were undoubtedly things in this world he could not remake. He could not change the wars that had ravaged the lands. He could not restore those countless lost dead to life. After all, even in his grand divinity, the flow of time was immutable, absolute. No, all that he could do is make this world new again, make it whole. To stabilize all the realms, to remove so much of the miasma that floated over all things...that, in itself, was as grand an undertaking as he could hope for.

But, he was only delaying the inevitable by thinking on it. It was now the time for action, and so he simply knelt down, taking the dust below into his hands and making it into spiritual power with nothing more than a word. Then two, then three. His divine nature coursed through creation itself, the ground below and the very air around him becoming the very same divine power he controlled. Yes, many would certainly see what was coming to pass, but they would surely never understand, nor could they have any hope of stopping it now. Even if they noticed in time, and he profoundly doubted that could occur, such an effort would be met by the Queen of Demons herself, protecting this effort with all of her power. For she, too, understood the necessity of this action.

There was simply no longer an alternative.

With every moment that passed, it was as though the very world around Mazda broke apart, creation itself dissolving into mere spiritual power for his own use. A use of his power that would surely consume him, but this was, ultimately, the last time he would ever act at all. To destroy himself was nothing short of the purpose of this.

If he did not act, the whole of the spiritual cycle would surely collapse in upon itself, a return to the void where life and death carried no meaning. Certainly, there were those who would welcome such an outcome. In many ways, even Mazda himself wondered if that was not the final judgement and purification of the world. But, of course, it could not be. This was nothing more than the premature destruction of proper stability, of all that was good and right, simply because too many shortsighted fools had wished to treat the world as nothing more than a tool, a toy, a bargaining chip for power. Such things would never end, nor would he wish to make it so. To change the nature of mortal life would be to undermine its entire purpose. All that Mazda could do, in his role as the sun, was to protect them a while longer.

As his power permeated through the continent, he could feel bits and pieces of it crumbling away, flowing into the world around him as it turned to raw creatia. It was nothing short of exponential in its spread, a force that could certainly have been destructive beyond all measure if he so wished. But that was not in his nature, nor was it the purpose of this action. As the ground beneath his feet became nothing, as the sea moved to fill the void he had created, Mazda spoke for the last time, the language of the divine echoing through the world.

Such words, spoken with the greatest power they ever could have carried, were the final sentence uttered from the lips of Ahura Mazda. A command to destroy all things, and to make all things new. Something that would not, he knew all too well, be enough to truly come to pass. That was not his intention. But to call upon his own nature as the Tongue of the Soul King, to speak as the Soul King had and to reach into all the realms, was enough to bring his own existence, for even the briefest of moments, into contact with the the whole.

Inverse met original. Fragment met whole. Even if for the very briefest of moments, true consciousness was laid upon the Soul King. A single desire, a single action already undertaken.

The realms torn asunder, and the realms rebuilt, in not so much as the blinking of an eye. To the mortal eye, such changes would surely never even be seen. A new world was created for them, one free of all the instabilities that might ever have been. One free of the encroachment of the Demon World, of Black World, of the Sugiura Realm and countless other dimensions and places which had overstayed their welcome. The barriers were no longer collapsing; now, they had never weakened to begin with.

Yes, there were still those who would surely have the wit, the strength, the heart to feel and to know that something had transpired, that this world was not what it had been only moments before. But there could be no changing such an action now. The sun had set upon the old world.