Sword in the Dark [Lukas/Cala]

Sword in the Dark [Lukas/Cala]

Despite that, it wasn't a charitable offer.

"Need to make a good public image." the silver maned man whispered, sitting on a cheap, foldable chair. His hands bridged underneath his chin, propped on his knee. Bright tubes lined the ceiling, a short rentable unit located near the shipping docks. "It'll have to work, right? Building the community? Preparing future Vandenreich?" his words trying so hard to convince himself.

The floor was solid wood, walls barren, obvious outlines of previously hung pictures and photos pot marking it. A large mat had been set up, with a small stand of fencing swords and basic safety equipment cluttered nearby. The edges of the gear were noticeably aged, well worn with multiple needlepoint markings.

The quality of the scheme was questionable, and he knew that deep down. But he had little introspection at the moment, cabin fever had been setting in for far too long. To get out of the city. Will teaching sword crap really do that for you? Lukas' teeth grit, a deep scowl as he rubbed his temples.

Something stupid about having hope. 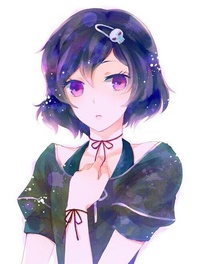 Ever since the tides of war had begun to rise again Cala had stirred from a deep, unsettling melancholy. A Loss of purpose, Loss of direction, had gripped the small Arrancar and lead them into a morose slumber for a long time. Devouring the average Gillian no longer satiated them, battle instead thrilled and gorged them among other things, exploration even, and while one might wryly comment on Cala's loss of direction as their aspect of death devouring itself they had, nonetheless, shaken themselves from the long-standing stupor to explore the realms once more. In their malaise they had seen much of Hueco Mundo, at least as 'much' as one could call the nigh-endless dunes of sand and near-emptiness of the place.

Now Cala sought to explore more of The Living Realm and, having rather unrefined control of their ability to move between realms, found themselves in the City of Light before too long of wandering. Their Sealed Form hiding their true nature behind the façade of a High-Spec human, albeit one far weaker than one might expect a High-Spec human to be. It was not long wandering the City of Light that Cala found several flyers for a training class posted and, that insistent urge under their skin driving them forward, squirmed as that familiar war between the timidity of the Sealed Form and True Self began once again. A cold, coiling anxiousness twisting in their gut as their grip upon the flyer tightened just a tiny bit. Perhaps if the individual offering this class was particularly weak Cala could feed on them?

Even before they had finished the thought Cala began walking briskly through the streets toward the indicated address and, pausing before the door, their face warred with itself into an expression somewhere between an anxious grimace and a scowl as they sensed the more powerful being inside. With his hunger and desire to feed receding, his timidity resurfacing in full, Cala decided to politely knock and actually take up the proffered lessons anyways. Fencing was not at all something they were familiar with and, at the very least, practicing against a foreign fighting style might be useful in future battles. As long, at least, as this 'Lukas' individual was as skilled as the flyer claimed he was.

Giving a brief moment after their knock Cala would gingerly grip the handle of the door and pull it open a tiny bit, their mop of styled black hair, skull hair-pin and lavender eyes peeping into the room in a textbook example of shyness as they looked around. Asking in a quiet, uncertain voice as they did so.

"Ummm, hello? Is this where the lessons on the flyer are being held?"

A slow, gentle poking of the flyer through the door's opening would follow this hesitant question.

The door slipped open slightly, the remnants of a flyer pushing through the crack. The question drew his attention, a slight nod before the realization that he was unseen. Words soon followed, a slight crack in his voice as he stood up slightly too fast. "Yeah, you're in the right place." he'd half bark.

Barely a step forward, and he'd pull the door open, turning away as he did towards the equipment.

The swirl of silver through the air. A dancing foil, flickering underneath the clinical light. Even the cheap equipment felt good in his hand, traditional as it were. Lacked in force compared to what he could generate with his spirit weapon, of course; but that made it better for teaching. Especially beginners.

A spin on Lukas' heel, the foil's tip swinging arc wise, pointing towards the woman standing at the entrance. "So, how much do you know?"

Cala almost jumped as the voice that responded nearly barked at them and when the door flew open Cala held the flyer up almost as if it were a shield. Though with a flash of silver hair Cala blinked as the figure turned away and go right to business of picking up one of the old weapons. Cala's form, for now, gave off the energy of a high-spec human, masking their Hollow traits within them, and as Lukas tested the foil's weight Cala simply watched them move. The precision to Lukas' movements were rather advanced and Cala could appreciate the skill on display, enough so that the thought of fighting Lukas almost vanished from their mind, and training seemed a very good idea.

As the Quincy turned on their heel and pointed the foil's tip at Cala they blinked, blushed just a little, and shrugged a gentle shrug. Their eyes staying on Lukas' chest as they shuffled their feet.

"Umm... I know the basics I-I think? It's not my first time using a weapon but I don't think I have ever used weapons like this. I-I'm not sure how much transfer over from one art to the other."

Taking a moment to actually think about it Cala took a step forward and looked at the old equipment, pursing their lips in thought, before looking up at the Quincy before them.

"I-I also know a bit about the theory of fencing. Very precise movement, nimble footwork, umm... a focus on angles and u-usually controlling the center of the duel around your opponent's chest."

Cala said, nodding at Lukas' chest as they looked down, now holding the flyer in both their hands in front of them down by their thighs. Waiting to see what Lukas said in response to their initial information.