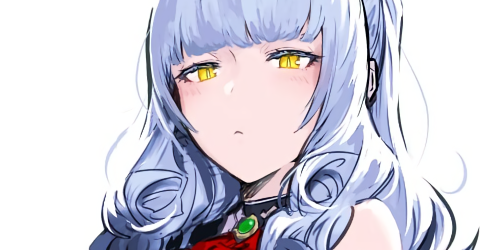 She swore she sensed an odd presence, having ceased her hunt to quickly investigate the intruder. Whoever or whatever it was, it was pretty strong, and she was very uninterested in having her kill stolen again - she already had some stupid worm snatch her prey right from under her, LITERALLY. Maybe she should figure out how to burrow through the sand... No, that was stupid, besides she'd get sand all up in her outfit, and she was already irritated having to live in that shit to begin with.

Quietly and carefully approaching what she sensed, her eyes wide and focused as her pupils flickering with spiritual power as she tracked that blip of light, until she peeked above a dune, eyes locked on some flame-headed fellow. Oh, it he was an arrancar, no wonder... God, what bright obnoxious hair... He's lucky he seems to be pretty strong or else something definitely would've picked him off by now.

How would he fair against the unexpected? Wouldn't hurt to put that to the test. Gripping her Zanpakuto's handle, she'd quietly watch the intruder for a moment, before pushing off with her Sonido to close the gap, swinging her sword down upon him with speed and ferocity, eyes glowing with bloodlust.

Ignacio Vega
It was easy to walk the sands of Hueco Mundo without encountering trouble when you reached a certain level of power. A point where even the boldest of Hollows might consider it within their best interests to stay out of your way. Ignacio was not quite at that level, but he also rarely went out asking for it either. His conversation with Tier had gone favourably, though, so perhaps he could be forgiven for being so bold as to walk alone.

The telltale buzz of a Sonido was enough of an indication that this had not been a wise endeavour.

It was fortunate that, despite having the drop on him, his opponent was not vastly superior to him in speed. He was able to raise a hand to block it, golden eyes flashing as he turned in their direction, but even that did not entirely mitigate the force of the blow. The sword cut down with impressive force, pushing through the layers of his Hierro and splitting the hand below down the middle in a ghastly wound. That might have been a crippling injury had it not been for the protection put in place, but it did reveal the first of Ignacio's abilities too. In response to the breaking of his Hierro, there was a quiet hiss as a spray of scalding mist was launched in the direction of his attacker.

He was unfazed by the sudden burst of heat, though, and remained exactly where he was. Planting his feet firmly, Ignacio released his spiritual pressure in a wave of energy that set the very sand at their feet aflame. Then he waited for her next move, his own sword still hanging at his hip as one mangled hand was now clutched against his chest.

"Woah!" A cry loosed when it felt more like her blade hit a brick wall than a person's hand, blinking quickly when the heated mist spat at her face and body, causing her to immediately back off and gently cringe, though the burns were slowly but noticeably trickling away as she put some distance between the two of them, her lacking in Hierro clear but the damage not bothering her. She'd watch the sands around them burn with a slight sweep of the gaze, letting out a gentle 'hmm' before returning to him.

"Wuff, you really are a tough guy," A sharpened grin formed on her face as she addressed the man she assaulted, though her hand was tight on her blade to still show she was up to continue exchanging blows if he wasn't interested in talking, "Would've sliced through you like some wimpy hollow otherwise."

Even with flames roaring around her, she would come to notice that he didn't unsheath his own weapon. Probably didn't need it, she'd assume, even less reason to test things further.

Definitely wasn't an Espada, definitely never saw him in Aizen's army.. Maybe he was some wanderer, or maybe he was younger than her. Who knew?

Ignacio Vega
“Most people talk before they try to speak with their weapons.”

His eyes burned with a fiery intensity as Ignacio stared sharply back at the woman who had just attempted to ambush him. He was hardly the type to just immediately drop his guard because she spoke to him, but she had also avoided attacking him again. That was smart, at least. She had some skill at self preservation. His hand was slowly beginning to knit itself back together too, flesh warping as the two parts reformed into a complete shape again.

“I am Ignacio Vega, and I have spent many years keeping to myself to protect what I must.”

He stepped forwards then, the flames that surrounded him making an effort to part so as to ease his passing, but they did not look to yet subside. He would walk her down if he had to, and if she let him, with the fire following in his wake.

“Now stow your blade or I shall be forced to draw my own. Or flee, if you wish, I will not follow you.”

She couldn't help but lift an eyebrow at that statement. In her experience, she more likely had some son of a bitch trying to tear her throat out before any chance for questions could occur, but it was becoming increasingly apparent this guy's experience didn't make him into 'some son of a bitch'. That, plus Kita wasn't interested in wasting energy on an actual fight, absolutely one she clearly was not winning - the starting blow was pretty much meant to accomplish either quickly offing some scrawny competition or having a chat.

Without another word to it she'd sheath her blade, raising an eyebrow and holding a hand on one of her hips, "Kita Lirio. Sorry, had some kill stealing pests lurking around and was trying to clear the perimeter." She'd cross her arms, but would quickly add, "Not that you're a pest."

Her gaze would go over to the flames, gently shrugging her shoulders, "...Cool fire?" 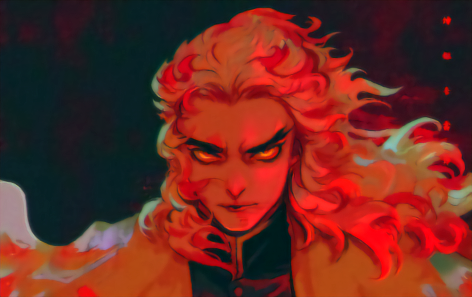 Ignacio Vega
"The perimeter? Do you lay claim to this territory then or is there someone else that does?"

There was a crunch as the last parts of his hand snapped together, the wound now all but healed except for the white flames licking away at the scar tissue. He stopped his advance as she met his questions directly, she was at least capable of thought. That was the difference between the people and the mindless beasts that also roamed this unending desert.

"I only intended to pass through, it is rare for me to wander so far from my own territory without purpose. I assure you, though, that I have little interest in the stealing of kills."

Kita would shrug her shoulders, "Yeah. I normally don't give a fuck if others are walking through it unless they're trying some dumb shit like stealing food. Got a pack of assholes at home to keep content, so it's either they eat or I get stabbed in my sleep and have to beat them up again."

She didn't appear bothered or concerned about the apparent relation she had with the guys she co-habitated with, stating it as if it were some foolish prank done at a sleepover. The only thing keeping them together was mostly food or a thrilling hunt, and it wasn't like she wasn't going to oblige. Though she would tilt her head and raise an eyebrow,

"Where you from, Flamehead?" Honestly a rare opportunity, she wanted to take up talking with someone who didn't appear to have a conditional knife behind their back.