She was all set. She'd be all ready to be discharged soon, it was just a matter of getting the damn paperwork sorted through. She'd be fine. She'd get her insides all cleaned out later on, there were others that were in much more dire need of getting all that hollow energy gunk out of them. She considered going and checking on the guys first. However, when she had asked who else was in the hospital from the reich. One name ESPECIALLY had caught her a little by surprise.

And thus how Giselle wound up making her way toward Sophie's room.

Frankly, she had been ...alarmed that the woman had shown up in the reports. And impressed at that. She paused just outside the door for a moment and took a gander inside. Making sure she wouldn't be interrupting any of the nurses. Looking around, it was ... well...chaotic. Nobody even gave her a second glance, everyone was rushing around, hurriedly moving. The place was a madhouse, and frankly she wondered if she probaly could have just waltzed over here when she'd still been in her gown. It was a rough time.

All the same, Giselle gently and quietly rapped her knuckles on the frame of the door, giving a few couple seconds for any response. A 'go away' or something that would indicate that this was a bad time, before she would promptly slip into the room.

"Sophie?" She'd speak softly, cautious of accidentally waking the woman if she was asleep. 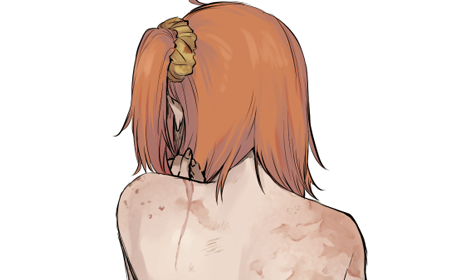 Who the fuck was this? Her first thought was a vulgar one which in itself was strange for her. She'd worked so hard to suppress her hot-blooded nature under professionalism and the trauma to her body and anger at the situation left her fuming internally at the state and actions taken by that arrancar. In the same hand there was just a lot of shame like she'd let everyone down. Even as she aspired to master the feats of Quincy and their spellcraft she accomplished nothing. She could still see the afterimage disappearing and his hand holding her skull with the force that could crush it like it was nothing.

She went to correct Giselle to refer to her as Administrator or something more proper. She was her superior after all and she didn't even know this woman beyond files and reports. Sophie could not be fucked maintaining appearances though at this stage where her whole body was teetering on the verge of death. Who cared what someone called her right now?

Truth be told, Giselle had considered it herself. But at this point, whose opinions was she really changing anymore? She was either a teammate or ....just a biohazard to be thrown at danger to these people. And truth be told, she kinda had a feeling that Sophie was a lean toward the latter. All the same, she knew all too well that familiar terse tone of pain. Yea, that seemed about right from what she'd heard about the woman's injuries.

"Sorry to disturb ya. I wanted to make sure you were alright." She noted, her voice on the lighter side of things as she took a moment to glance over Sophie, a clinical scan to look for any major trauma or signs of severe injury. She took a brief moment to look around, searching for any signs that someone else had been around. Which was.... a bit hit or Miss. She knew that there had been a few operative dispatches when this had all gone down. She honestly didn't really know WHO was or wasn't around when this had all gone down aside from Liltotto.

SOPHIE GEISLEITT
What the hell was that supposed to mean? Sophie probably would've been more inclined to insult her company in frustrations for being asked a stupid question like that. Did she look alright? What a dumb question, she thought quickly but that never left her lips. She didn't like the impulsive short temper that she had.

"Yes. What happened with the arrancar?"

She coughed a ragged wet cough after she asked, the small trail of red coming from the corner of her mouth and down her chin. Just coughing left her body screaming in agony and weak with pain. How pathetic.

Giselle raised a brow slightly at the response to her statement, it wasn't hard to see that the woman was in pain. And well, she'd learned a long time ago that regardless as to wether she could heal people, well. Nobody generally accepted her brand of it. Immune to the negative effects or not. Why am I even here?

"Right. The Arrancar. Mr.Getsuga Tenshou. Reports show he left. When myself and Soldat Solo first engaged with him, he said he was here for something. And well, supposedly, he snatched one of ours and bounced." She abstained from any ...conjecture. She hadn't actually been debriefed or gotten her hands on any of the footage or reports around the incident. "So for now, it seems he got what he wanted and is now gone. Which loosely matches up with how he kept talking about it. If we wanna trust that's really all he was here for. Though uh, you probably noticed I wasn't exactly up and about when he actually DID leave. Don't suppose you were still conscious?" She ventured, making her way over to one of the chairs off to the side and taking a seat, giving Sophie plenty of personal space as it were.

She said with another cough, her body feeling tight and fiery from the tensing of her chest muscles. There was a lot on her mind plenty of personal and professional things plaguing her. The woman's golden eyes blankly looking at the space in front of her and not moving to glance at Giselle.

If she was seeing anything she wasn't focused on it. Sophie still felt delirious and like her head was spinning. If only she was stronger, strong enough to blow that stupid fucking arrancar into bits.

Giselle noticed that far-off stare. The woman was getting worked up, thinking about something. "Slow-steady breaths ma'am. If you start choking on somethin ya cough up, the nearest person to do cpr is me, and I don't think either of us wants that." She pointed out, a little joke, but also actual firm advice. She could see the blood in Sophie's mouth, which meant there was some sort of bleed in her lungs or throat. If she got worked up and agitated it, the bleeding could get worse.

"No idea. A few of the staff and other vandenreich soldat that were on the scene who saw anything mentioned a woman with white hair. But well, sadly, the only candidates for that description don't really give any clearer answers." She pointed out. Sophie might have more she was aware of, but Giselle only knew of the two. Their very own Shirohime. And that White-haired woman from that Duvalier group. "I'm gonna be discharged pretty soon. If you want, I can make sure you get sent whatever information we dig up." I'd offer to send it to ya myself but well...my phone got destroyed in the fight. She offered. There was probably some 'You need to not worry about work and focus on getting better' line that should be said. But frankly, Giselle knew humans well enough to know that flat out just wasn't gonna happen.

SOPHIE GEISLEITT
The ginger's groggy mind was puzzled, working methodically to assess the precious little information that the brunette could give her. It was barely enough to make use of and the doting on her wellbeing was borderline irritating but that was mostly frustrations at her own shortcomings that made her end up in this position. It wasn't Giselle's fault she was here but Sophie also didn't just trust people at first encounter.

What'd someone like Giselle gain from her? Was she trying to suck up to her while she was in this injured state to garner favour for later? People weren't just good and jolly, it was the utilitarian nature of her that made her pick apart people's intentions and understand what they want. She just wasn't making much headway in her current state.

"Just bring me the files here."

She spat. Not the words, just the fluid that was pooling in her mouth.

Yea, Giselle wasn't too happy with the ramshackle information she was able to scrounge. But well....it was the best she could do in the hospital. It was frustrating, and frankly even just the "Old War Hero Returns" shit was hitting people pretty hard. Hopefully their intel painted a clearer picture. Or ...something. All the same, she gave a nod of her head as Sophie gave her response.

"Yes Ma'am." She noted softly, rising up to her feet and heading for the doorway. A pause, blinking for just a moment. Ugh...the hell. She was still a little dizzy. Not uncommon when she got hollow reiryoku all over her. But she'd be fine soon enough, she figured. She looked over her shoulder at the woman and paused.... before opening up one of the cabinets and setting a small rinsebin within Sophie's reach. So that she'd have something to spit into. She bit back the sentiment of 'get better soon' and simply took her leave for the time being, she was starting to feel nauseous. Sophie was giving all the signs of someone who wanted to be left alone, and Giselle certainly wasn't gonna insist on sticking around or anything. She had to get a hold of some files, and frankly not just for Sophie. There was a lot about this little throwdown that didn't add up and implicated a lot of unpleasant possibilities.