Al'in mir Azizi | The Winds Blow
Where before there might have been a polite chuckle, Al'in broke into a much more hearty laugh as Inanna propositioned him. He smiled broadly, a tear perhaps close to forming in the corner of his eye, and shook his head.

"Some people turn their nose up, others just ignore it, but you're the first person to just offer me a house, Nanna. And you only just met me!" He exhaled, still recovering from his bout of amusement, "But no, thank you, it's perfectly comfortable and cosy I promise. I am truly grateful for your offer of hospitality, but I do not need it."

It was hard to hide that he was quite dumbfounded by her, the can-do attitude and the toothy smile had been one thing, but this was like a whole new level. He might have done the same, had their positions and perceptions been switched, but it still did not change the fact that she was all too eager to help him out on a whim. Most people around here weren't like that at all. It reminded him of home. 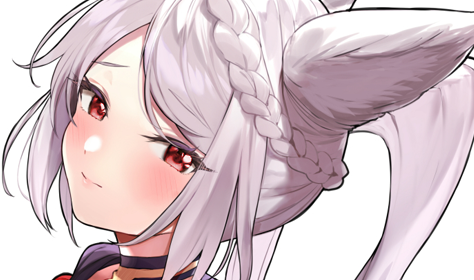 INANNA KISHAR
"Well of course Al'in. What's wrong with trying to make people comfortable and happy? Especially when you spent all day doing work like this."

She didn't click as to what the problem wouldn't be. It wasn't like he would break or steal anything she thought, he seemed like a nice guy.

"Are you sure? My mum could probably have some more friends and you seem nice. She's only got one that I'm aware of so you'd be perfect for her, pleaaaaaase."

Inanna cheerfully offered, this was for her mum too. If she wasn't around all the time then she needed to make sure her mum had a nice stable group of friends.

Al'in mir Azizi | The Winds Blow
"You don't need to worry about me. I take care of myself plenty fine, but you can be the judge of that yourself when you and your folks come over."

A hand waved dismissively, he did not want her getting all too bothered about it. Sure, it wasn't like he lived in a palace anymore, but that was a little more than a lifetime ago. Didn't feel right to go back to that style anyway, he hadn't earned it yet.

"But I'm sure that your mum is a lovely woman too, raising a brave girl like yourself. I'd gladly be friends with the both of you."

INANNA KISHAR
"Hmmph, suit yourself then Al'in but don't cry to me if it starts pouring rain. 'Kay?"

She looked a little upset that her attempt to be nice was dismissed and so he got a small indignant pout which quickly dissipated as her fickle mind jumped to something different and she looked around in the setting sun.

It was kinda cold, it didn't help that she was all sweaty and gross from working all day in the sun with lifting and stuff. With the evening and wind chill the baggy shorts and t-shirt weren't doing much for her.

Inanna asked while getting just a tad closer to him. Staying warm was like being a stick, you were better off being in a bunch if you didn't wanna break. That's what friendship is!

Al'in mir Azizi | The Winds Blow
He laughed again as she pouted in frustration, not at her but rather at the whole situation and how worked up she was getting. It was easy to get lost in how serious things were these days, better something lighthearted came along to amuse them.

"You won't catch me crying, Nanna. Especially not over a little rain."

Al'in saw her starting to look a little cold, so, as she drew a little closer, he welcomed it by taking a firmer grip on her hand. Had he a jacket or the like, he would have offered it to her now. Unfortunately, his outfit was not exactly the type that he could just easily share with another. Still, they shouldn't stay out late. Her mum would probably get worried.

"Alright, lets get going. I don't think your mum would like me much if you caught a cold on my watch."

She said with a bit of cheer and taking his hand. It was nice and warm and that lifted her spirits just a bit with energy, Inanna humming a little bit as they walked. She took the lead and began to guide them towards her mum's place with a tune to their steps.

"Well I'll give you some food anyway, I have some snacks that you can have but unfortunately I don't have leftovers. Since I grew bigger I'm way more hungry than I used to be."

Inanna was already thinking about what snacks he would like. Some chocolates or lollies would do him well.

Al'in mir Azizi | The Winds Blow
Al’in had been the one to offer her a hand, and yet she quickly took charge of their little venture. He supposed he was walking her home now, unless she was getting them aimlessly lost - in which case he would find that even more amusing. Not that he enjoyed getting lost, but she did seem like the type to run before she could walk and he was happy to be caught up in the whirlwind.

“If you don’t have food in then we can pick something up on the way, surprise your family with a meal. Unless you’re just feeling like snacking, snacking is also good. Not all the time but I think we’ve earned it today.”

He was pretty much calling after her, chasing a half-step behind as Inanna was neck deep in her own plan already.

INANNA KISHAR
That's right, she had her own plan. She was leading him home to get food but he did make a good point midway through. Inanna could get something already cooked and made which meant she didn't have to make it and he wouldn't have to wait. What a win!

Unfortunately his idea had lead to a detour and Al'in had set himself up to become very lost man. Inanna would insist over and over that she knew where she was going but the reality was far from true as it got colder and darker with the sun dipping.

Al'in mir Azizi | The Winds Blow
It was after they passed the same intersection for the second time that Al'in smugly realised that his prediction had become a reality. Perhaps he had weighted the dice by adding his own suggestion into the mix, but maybe the game had just been rigged from the start. So, with a little tug, he tried to get Inanna to stop or maybe just slow down enough where he could pull himself.

Now he tried to guide her for a change, not wanting to drag her but it would be easier to get her back on course this way. Though he certainly did not know a place near here, Al'in did have a much better sense of direction. He could guide a party through the desolate wastes without needing a map, the City of Lights was a walk in the park comparatively. It was just a matter of getting them back on track and then trying his best to follow Inanna's nose to a place that she found interesting.

He made them stop, oh no he was onto her and her awful sense of direction. Inanna had to really fake it here as she listened to him try to be subtle but she was in the self-conscious mode now.

"But it's getting dark, we should keep going home. We're not lost, 'kay?"

She assured with no actual reason for Al'in to trust her. Inanna's view on it was eventually she'd find her way back home you know? She wouldn't get lost.