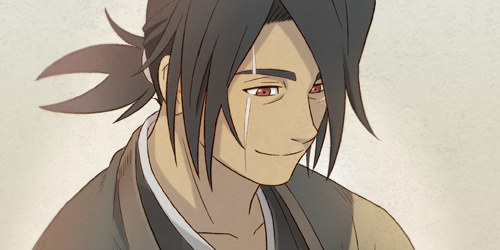 KAITO TOMOYUKI | GHOST OF THE RUKONGAI
Taking out the ingredients and setting them on another small desk at the other side of his room. He didn't really use it for anything, so, getting some bread crumbs and condensation on it was nothing that he really minded much. He smiled as Hiroe sat down next to him, making the little activity something of a competition. Chuckling softly, he took out a small handful of plastic bags to put the sandwich he had made in it, sealing it up for when they got to their location, handing a few off to Hiroe, as well as giving her a playful nudge to disrupt her rhythm.

Chipped ham and cheese for one, turkey and swiss with some assorted vegetables for another. He wasn't making too many, but it was a fun little way of spending time with one another. This was better than just admitting he had forgotten or having taken the steps to prepare it beforehand. It was fun to just hang out with her and do something as simple as this. As he finished, he set his hands in his lap. Neatly set next to one another, Kaito had a few sandwiches to his side, and he turned to see Hiroe's work.

"Alright, I think that should be plenty between us." 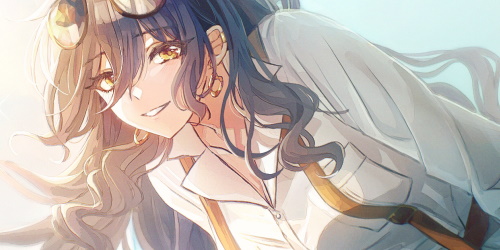 HIROE MIYASHIRO
Hiroe was equally pleased by this activity. Though she maintained that confident air during their pleasant little sandwich creation, Hiroe certainly commended Kaito for his genuine approach towards this date. Indeed, he was carrying himself with the same casual nature she typically observed in the academy. There was no sense of pretense, the habits young men could usually fall into on a date, but rather a simple man aiming to do his best. Hiroe welcomed that. Posturing didn't seem his style. Hiroe would playfully nudge him in return during meal preparation, eventually completing her own meal. Presenting her sandwiches flamboyantly, HIroe would cast a playful grin Kaito's direction, proud of her handiwork.

"I present to you - Hiroe's super, delectable, awesome sandwiches. See this, big guy? Five star meals over here. Time to pack this up and head on out. By the way, good job being genuine so far. You haven't pretended one bit so far. Good job. A woman would certainly admire honesty like that. Keep it up."

KAITO TOMOYUKI | GHOST OF THE RUKONGAI
Impressing someone was part of a date, but, by and large, with them already being friends, there wasn't too big of a need to truly wow someone. They both had come from humble means -- for them, less was more than anything flashy or extravagant could hope for. It was more than just a night for two potential lovers, it was a little outing between friends, and they were having fun together.

As Hiroe gave her little presentation of her handiwork, Kaito found himself laughing, lightly nudging and pushing her as she showed off. She certainly had presentation down pat when it came to food. Unfortunately, Kaito was a bit more reserved than that. Actions spoke louder than words, after all, and to simply have the fruits of his labor was enough for him. Nevertheless, he tried to humor Hiroe by gesturing in a similarly flamboyant fashion.

He tried to think of something on the fly, but, nothing. His cheeks flushed red as he found himself chuckling and rubbing the back of his neck.

"Yeah, I got nothing. I'm not good at that. I think I've got visual presentation down, at least."

He let a hand hover over where each sandwich was, neatly sealed in a plastic bag for preservation. But, he stood up, brought the cooler over by them, and started carefully setting them in, making sure that everything was fitting properly, as well as not being squished by the other things in it. Closing the lid, he grabbed the handle and picked it up, walking over to the door and opening it, making sure he was out of the way so that Hiroe could slip through with ease.

"Well, now that we've got our little picnic sorted out, shall we?"

Hiroe chuckled at Kaito's shoddy attempt to present his meal in a fashion equal to her own. She found the attempt quite amusing, almost expecting, considering his disposition, that such would be his reply. There really wasn't anything special about the sandwiches, but the preparation made the experience a little more sacred. Their meals fully prepared, Hiroe would watch Kaito pack everything into the cooler, observing him with curious eyes as she rose from the ground. Now, the next part of the date could truly begin. She would promptly follow him through the door, moving towards the position she occupied before she entered his room. Grinning from ear to ear, Hiroe would nudge him in the shoulder again.

KAITO TOMOYUKI | GHOST OF THE RUKONGAI
He wasn't really good at being flashy. But, at the very least, he tried. Not really to impress Hiroe or anything, just to try have some fun with the whole thing. As Hiroe went through the door and nudged him on the shoulder, he closed the door behind him, chuckled softly, and returning the nudge as he started taking a few steps forward.

Despite the added weight within the cooler, even a spiritual being could lift it without much difficulty. Picking it up and hoisting it over his shoulder, a warm, but confident and determined grin spread across his face. He started to take off running, turning to look over his shoulder and call out to Hiroe.

"Let's run there! We can get a little Hoho practice in on the way, too!"

Ah, there it was again. Even with the almost painful amount of normality that Kaito exuded on the day-to-day, there was always part of him that sought to improve and to do his best, even in his off-time. Hiroe obviously had the advantage of, well, not having a cooler over her shoulder. He did want to get there before it got too late, but, he still needed to be careful to not destroy anything that was in the cooler.

And so, the little game began.

HIROE MIYASHIRO
A race, ah? Well, Hiroe supposed it would be fun to make a show of things and outdo him again, from her perspective at least. As they made towards their location, Hiroe would take a deep breath, allowing Kaito to get a headstart before bolting off, employing her meager use of flash step to vanish from one spot to another, mixing in her natural speed to leap from tree to tree, aiming to reach their location. Kaito was at the disadvantage, but something dawned on Hiroe. Kaito told her the location but didn't exactly list out its direction. Thus, she would appear on his back, pulling at his ear as he moved at his own pace. With a teasing grin, she poked at his head to distract him, and pose a question.

"How am I supposed to race you when I don't know where this place is, huh, big guy? Tryin' to cheat already?"

KAITO TOMOYUKI | GHOST OF THE RUKONGAI
It wasn't meant to be as much of a race, more or less just a way for them to get there before it got too late. But, to them, it might as well have been a little game. As the two headed into the forests, he suddenly felt her pulling on his ear, causing him to grind to a halt, wincing in pain as he tried to straighten himself out. Which, wasn't easy given the height difference. So, he was less straightened out, more tilting over awkwardly as she held his ear.

"Ow, ow, ow! Okay, okay! Fair enough! For the most part, it's straight ahead. Couple turns, but, it's a giant clearing with an even bigger lake. It...honestly kind of looks like the trees just disappeared to create this beautiful view of the sky."

A bit wordy, but, with her tugging on his ear and poking at his head, he wasn't really going very far.

Hiroe grinned from ear to ear as she playfully tapped at his back and employed shunpo, vanishing a few steps ahead of him as she hurriedly raced towards the location Kaito had mapped out. He was such a good guy at heart. Almost too good. Unfortunately, Hiroe was a proud gremlin, and the thought of winning the race was enough to make her indulge in a bit of deception. Following his directions word for word, HIroe propelled her body forward to make it there before he did.

KAITO TOMOYUKI | GHOST OF THE RUKONGAI
"That little...!"

She didn't waste any time taking advantage of his rather preoccupied state. The moment she let go of him, she took off running. He shifted the cooler over his shoulder to try and catch up, but, with the added weight and him trying not to crush their sandwiches, he ended up being quite a bit slower than Hiroe. He kept her in sight, but he doubted he was going to pass her.

As he watched her duck into the clearing, he swiftly followed behind her, a bit out of breath from running, as well as trying to keep their food and drinks safe. Yet, he was smiling all the same. She might be a gremlin, taking advantage of him like that, but, it was all in good sport, and they were having fun. So, approaching her and setting the cooler down, he playfully flicked her nose as he kneeled down to unpack, pulling out some towels to sit on, as well as a number of extras from a secondary compartment.

He didn't have much, but he certainly had packed what he could to account for just about everything that they could do in this not-so-little, isolated clearing. Even swimming, should the two students be so daring.

HIROE MIYASHIRO
Hiroe would nudge Kaito in the arm as he flicked her in the nose, relishing in the prank she hatched in the spur of the moment. The act was far from malicious, and if anything, it was only meant to make the race and the picnic as a whole, all the more entertaining. She would sit down beside him as he unpacked everything, tilting her head in curiosity. Curious golden eyes wandered about their surroundings, observing the lake with a measure of interest.

The oceanic blue was so refreshingly clear that Hiroe could see her reflection. If she was rating him on the date so far, she'd certainly say that for all the resources he had, he was certainly leaving a good impression on her. It wasn't much, but he wasn't trying to make it anything more than it was either. He was unequivocally genuine, and Hiroe respected that.

Turning towards him, Hiroe would reach in and grab a bag of chips, pop them open, and pose a question in Kaito's direction. She was curious to catch up on lost time.

"So, big guy, how have things been goin' with your classes? Meet any cool new teachers? Learn any new tricks since the last time we saw one another?"