The Roar of Autumn[Amaranta, Arianda] 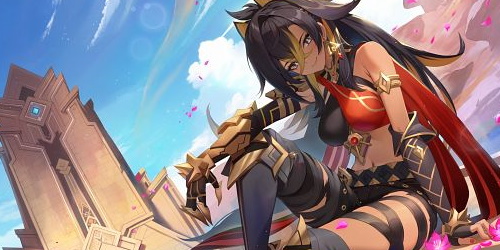 "Ah, so you mean to imply you've been called a bimbo by a child? Got it. That's pretty fucked up, lady."

If it was a contest of words Arianda desired, Amaranta was more than prepared to match her on the front. Far as she was concerned, this was a battle. Insults were always bound to happen, depending on the opponent's disposition. And to be honest? Amaranta knew wholeheartedly that she was getting under this woman's skin. If the insults weren't that bad and her pride was so untarnished, why was the killing intent constantly increasing in the atmosphere? Why would she assume a new form to match her own? Witnessing the transformation firsthand, Amaranta bore her fangs in unrestrained joy. This is what she lived for. Conflict. Battle. The clashing of wills. Nothing could truly compare to the exhilaration she experienced when she wagered her life.

At the conclusion of her own transformation, two bolts of lightning raced toward Amaranta at breakneck speed. If she hadn't activated her resurrecion, dealing with bolts of electrical energy might prove a difficult task. One particular function that worked to her advantage is that the dry atmosphere allowed her to create her flames at a rapid pace. Each punch packed the equivalent of small explosions within them, and every strike contained fire behind its impact. Fierce swipes of her claw created a wall of flames in an attempt to diverge the forks of lightning.

Of course, Amaranta didn't account for the demon to hurl her spear towards her. It hit clean against her shoulder, causing her to growl out in pain. Well, well, this seemed to pack quite the sensation of pain. Even so, Amaranta simply grinned. Her form remained tall and defiant, as if it were the image of determination itself. The pain came secondary to the exhilarating adrenaline that abundantly filled her frame.

The follow-up blows as she called the spear to her side were resounding and each of them connected the way the Arianda desired. Growing tired of simply being on the defensive, Amaranta used Sonido to shift her body forward as she aimed to crash the spear against her body. Swinging her fists forward, she hit her arms against the spear to create a small explosions between them. What would have been a brief lock simply turned into a diversion as Amaranta used the explosion to her advantage, or intended to at least, by using her speed at its peak to vanish amidst the smoke, appearing behind her as she aimed for a double hand strike at the woman's back to create another explosion as well as burn her amidst the fire.

"Cool lightworks. Packing some pain behind these attacks now, too. Not bad..."

In truth, Amaranta was quite impressed by her newfound abilities. She certainly wasn't as weak as she expected. She likely surpassed her in many facets, but Amaranta would go on until her release faded out. The will of a lion would carry her forward. Outmatched though she certainly may have been, she wasn't going to bow out until she exerted every piece of energy out of her body.

"No, simply that a child can come up with better than 'bimbo'."

Frankly speaking, it was a bit clear that Arianda had created some form of advantage for herself; unless Amaranta was toying with her. Sure, her lightning was successfully redirected by the clever walls of flame for Amaranta; but her other few attacks connected with ease. However, the connection of her final attack, one that would have been quite devastating, was met by the clanging explosion of reverberating metal; swiftly followed by the bang of an actual explosion. It was a wonderfully executed maneuver, and one that allowed the Arrancar the opening she desired. However, Arianda had the intention to turn Amaranta's own attack against her; in a way.

The demon made no immense effort to avoid the attack, aside from using a bit of swift body manipulation to protect her organs from injury before Amaranta caused a rather jarring explosive strike to impact Arianda's back; allowing the smell of burned flesh to permeate the air. Not to mention, it caused Arianda to flip forward. However, the demon used the sudden spin of her body to her advantage. Honestly speaking, it was a bit of a surprise attack.

As the demon rotated swiftly from the rather intense strike to her back, which was singed and bare thanks to the expulsion of the clothing upon her back, she added her own spin onto the move by swinging her spear around her body with immense force and speed; causing her rotation to accelerate to a peak that Amaranta's strike alone could not have achieved. As the demon spun around, a fierce scowl upon her fair features, the demon slashed her spear across Amaranta's exposed belly in such a way that could have cleaved it open; and such a fierce strike it was, it could likely push past a bit of Amaranta's formidable hierro. However, that was only conjecture born from Arianda's understanding of the maneuver she had performed. Frankly speaking, one could call it artful with the precision that Arianda carved between muscle and sinew to find the weaker portions of the muscle; however, in the heat of battle, one could easily call it dumb luck. Regardless, a powerfully artful strike was what Arianda had delivered to the fierce lioness before her.

Afterwards, the demon used the remaining momentum of her spin to deliver a roundhouse kick to the side of Amaranta's head; using the very remaining momentum to spin through the air before she landed on the ground with a few flips, and the grace of a feline. She stared, glared really, at Amaranta as she held her posture, muscles tensed, red eyes trained, her singed back recovering painfully, and the demon's grasp on her weapon was all she truly doing after landing. She awaited an attack that could come from anywhere and everywhere; waiting for the comeback from Amaranta after such a ferocious counter. She did not expect it to fell Amaranta, even if it could likely be quite the withering attack, the demon expected such a woman to be able to walk it off and come back at her again. And so, Arianda waited with a patience she was forced to practice; her senses completely opened up in a way only warriors could truly understand.

She just honestly hoped she didn't have to kill Amaranta. That would honestly sour their bit of fun.

Amaranta was growing somewhat annoyed as this clash went on. On one hand, she clearly welcomed the thrill. On another, it became abundantly clear that victory would not be ascertained. There was overcoming an obstacle, and then there was dealing with women like this who wanted to force her into submitting to their will. No matter what Arianda did, she wouldn't apologize to the owners. She could cut her until her organs were slipping out through her stomach, but it wouldn't change the result. Perhaps, to some degree, if they were more evenly matched, she'd feel confident in her victory, but with each clash, each strike, each reflex Arianda gained in hew new form, there was, quite simply, little notion that she'd pull this one out.

At that moment, the graceful slash of her spear, executed at high-speed, cut clean through her hierro, opening a fierce wound across the woman's belly. Accompanying the wound, Amaranta spurted out a considerable measure of blood, growling furiously as maintained her balance, though the roundhouse kick certainly capped what was quite a commendable assault. Well, commendable to anyone but the blazing lioness, certainly. Her regeneration momentarily compromised, Amaranta placed her claw against her stomach. Tch... What a thorn in the ass. She supposed this tiny nuisance of a woman was looking for utter domination in this battle, to assert her will and force her to apologize, eat crow, and come off her high horse. As if. She wouldn't give her the satisfaction. Her stance seemed to indicate that she believed Amaranta would come roaring back in for a counterstrike, but really from all the power she exuded right now? The notion seemed foolish. Better to avoid this annoying lady like the plague.

Amaranta wasn't looking to die over this shit. The leonine woman was far too prideful to apologize for something she viewed as a harmless, albeit somewhat rude, act either. Indeed, rushing in again would only make her condition worse, and if she lost in a place like this, falling over like a miserable foot soldier? She'd be furious. No, the next act became quite clear. A victory is what the woman desired, no? To prove a point? What better way than to rob her of that by simply removing herself from the equation entirely. With blood pouring at her mouth, Amaranta spit the lot of it on the ground. Forming a Garganta with her free hand, Amaranta slowly shifted her feet back as she held the woman's gaze.

"You've got some fire, I'll give you that, but this has grown kinda' dull for me. It's clear I'm not overcoming the gap between the two of us now that you've leveled up. Better to let you think you would've won rather than get a definitive victory over me."

Amaranta flashed the middle finger towards Arianda before leaping backward into the Garganta. She was well aware of her wounds, but frankly, she had a few companions who'd help her in Hueco for the right price. Even to the end, she wanted to be a thorn in this woman's ass. What better way to do so than to legitimately leave the battle on a note like this? Bearing a grin before her descent, she called out to the woman one last time.

Maybe the demon wouldn't think much of this meeting, but did that matter to Amaranta? Hell no. Ever the antagonist, she got off on leaving a sour taste in one mouth or another. And that, was victory enough for her...